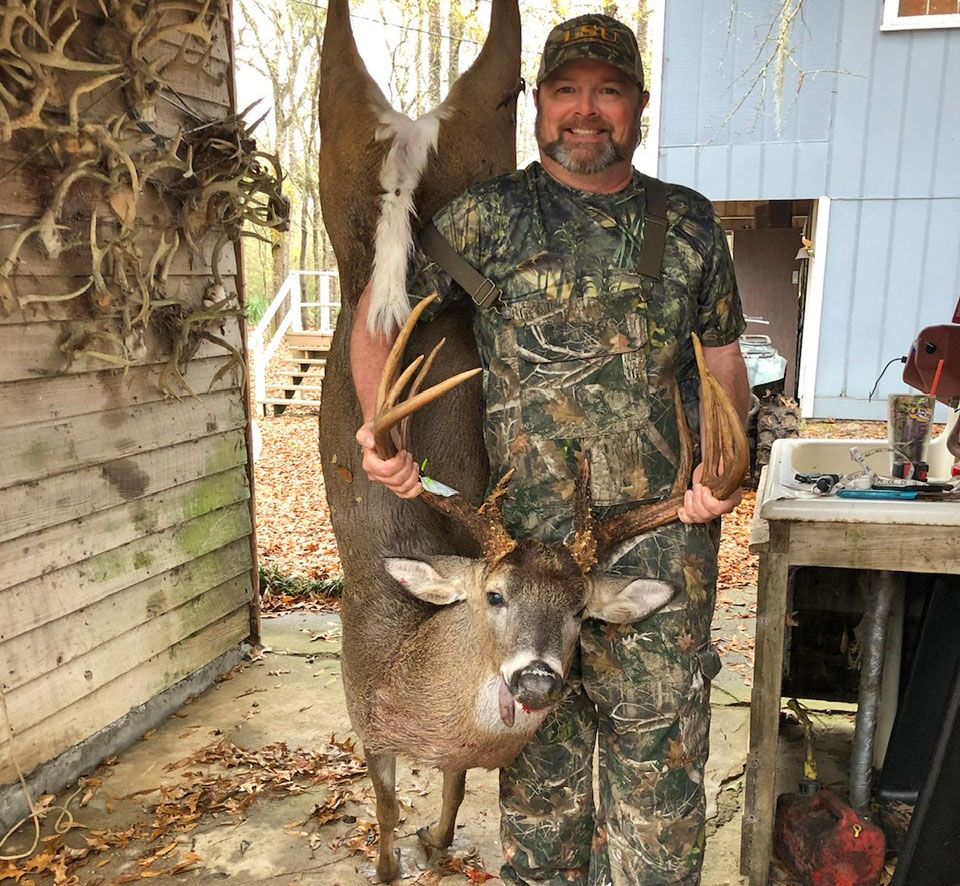 A storm of messages batters a cell tower near Marksville, Louisiana.

John Voorhies, a 46-year-old, city-driver for UPS Freight, receives a text: “Is it the big one?”

“Maybe.” John’s fingers tap the screen of his phone.

About two miles from Marksville, Spring Bayou WMA sprawls over 12,506 acres of Red River bottomland. The land is low, wet and thick with vegetation; it’s swamp-buck country, where the risks are high, but the payoffs can be huge.

“I’d planned on hunting in a different area,” Voorhies said.

Picture pig sign: torn ground, uprooted plants, and wallows. The woods are crowded with palmettos and hedge-like plants, probably swamp privet. There’s also willow and buttonbush where you would expect it, and overcup oak and bitter pecan in well-drained areas.

But Voorhies’ hunting buddies convince him to give the spot a try.

“They showed me trail-cam footage of a large buck,” he said. “They even told me what tree to climb.”

It has been 15 years since Voorhies harvested a deer.

“I’m a single dad, and don’t get many opportunities to hunt,” he said. But his children are older now, and Voorhies is happy to be back in the woods. He has harvested his fair share of deer in his life.

“But I have never seen anything this big in the woods,” he said.

Voorhies watches shades of brown and green materialize from the gray woods. It’s daylight, but barely. As the world brightens, the intricate patterns woven by the limbs of the thicket as they fold in on one another are discernable. His vision grows sharper. It is a magical time to be in the woods.

John texts his group of friends about a small deer, probably a doe, that he spotted earlier. But he receives some unwelcome news: talk of other hunters close by, the flash of orange near your stand, the white beam of a headlamp bobbing in a nearby tree. These are the frustrations hunters face on public land.

Voorhies starts to tuck his phone into his bag, but stops. There is a doe walking in the thicket.

“I was about to text the group about the doe,” Voorhies said. “I just so happened to look over my shoulder, and there he was.

It’s a 25 to 30-yard shot. Voorhies shoulders his bolt-action .30-06. He discovers immediately that his scope’s magnification is cranked up to nine, but there is no time to fix it. He waits for a clean shot, frozen in the tree.

He focuses on a gap in the thicket. “Almost. Wait. He’s reached the gap.” Voorhies fires, and the buck falls down into his tracks from a clean, neck-shot.

A beautiful 10-pointer, the buck had main beams longer than 26 inches and tines as long as 9 1/2 inches.

Voorhies plans to hang a picture of his friends beside the deer after it’s mounted.

“When you have friends who have been hunting an area for over 20 years, and they tell you to hunt a specific tree, get your butt up that tree,” he said.

Sign Up Now
About Will Martin 104 Articles
Will Martin is an adventure writer based in New Orleans, LA. He pens fiction and nonfiction stories at willmartin.info, and is a staff writer at Louisiana Sportsman. He can be reached at willm@lasmag.com.