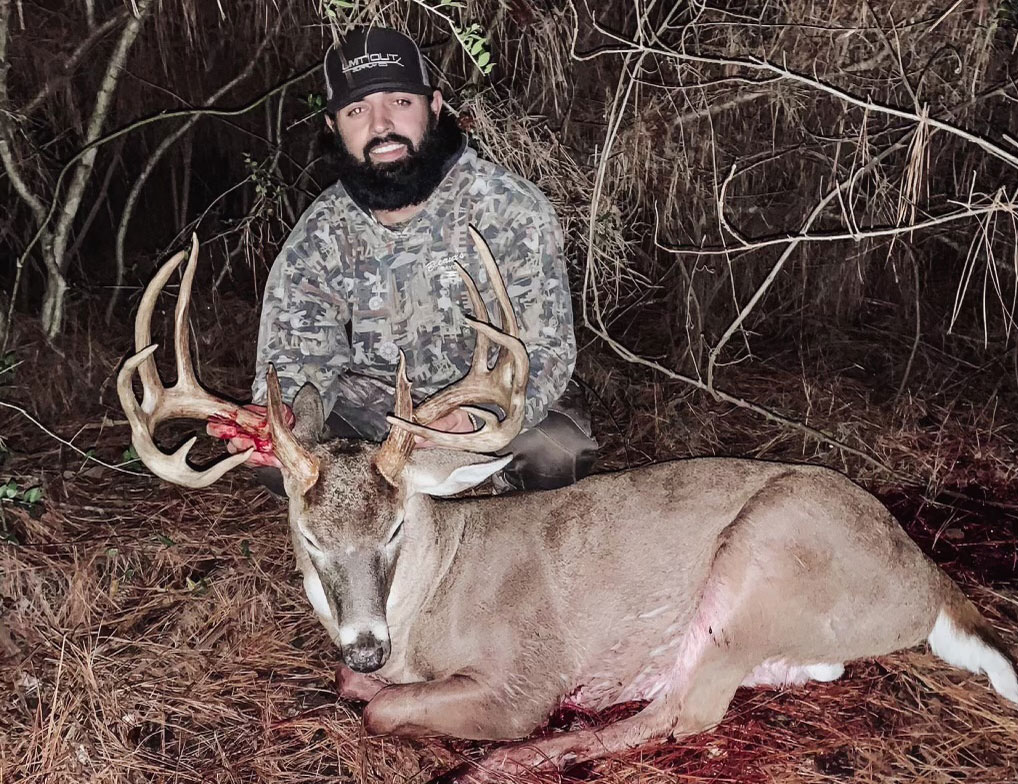 Dylan Cagnina, a 23-year-old electrician from New Iberia, hunts with his dad on a hunting club in Bienville Parish. He connected with a big buck on Dec. 12, a buck he is sure is the one he missed a year ago.

“I was hunting on the Bienville Parish lease last year when I watched a big buck walk out of a swampy area near my stand, stop behind a big tree and then stepped out and I shot,” Cagnina said. “My bullet hit a branch or a tree and the buck ran. We went down to look and found no evidence I had hit him.”

This season, Cagnina had the big buck on his mind when he and his dad made the long drive from New Iberia to the Bienville Parish lease to hunt.

“After getting off from work Friday, my dad and I drove up to hunt the weekend,” Cagnina said. “After the morning hunt the next day, dad and I went to put out feed and check our game cameras. I had one camera set on video, pulled the card and found a big buck, probably the one I missed a year ago, on the plot feeding Friday at 11:11 a.m. Here I was walking on the plot at the exact time where he had been eating the day before and I was afraid I had messed up leaving my scent.”

Climbing into his box stand at 1:00 that afternoon, Cagnina was not feeling too hopeful as he was afraid his scent was still on the plot and a mature buck was not likely to come out of the woods at least in daylight. The stand, which features a food plot out front with a shooting lane, also has an oak bottom directly behind the stand.

“I sat on the stand all afternoon with no action until around 4:30 when a hog came running out of the woods, across the food plot and into the woods on the other side, squealing and making all kind of racket. Once again,” Cagnina opined, “I figured my chance at a deer was really messed up with all the racket the hog was making.”

At around 5 p.m., Cagnina was surprised when he looked up and the buck he missed a year ago, the one on his video the day before, stepped out of the thicket at 40 yards.

“I shoot a Remington 7 mag and I got it out the window and on the buck,” he said. “The only problem was the buck began walking directly away from me and I was faced with a decision as to whether I should take a risky shot or pass. Thankfully, at 65 yards, the buck turned giving me a broadside shot and I took it. His chest hit the ground and he took off through the woods.”

Calling his dad and telling him what he had just done, Cagnina’s dad told him to go look for blood and just to sit tight until dark and he would come help him look.

“When I got down to where the deer was standing when I shot, I found lots of blood,” Cagnina said. “I got back in the stand and waited for my dad. We walked down there, followed a blood trail for about 40 yards and walked up on him where he had fallen and died.”

The buck was impressive with a rack of 12 points, inside spread of 17 ½ inches, 5-inch bases and one main beam that was 27 inches long. The buck was aged at 6 ½ years old and weighed in at 200 pounds. Cagnina took the buck to Simmons Sporting Goods in Bastrop to enter it in that store’s big buck contest where the rack was measured at an impressive 172 3/8 inches.