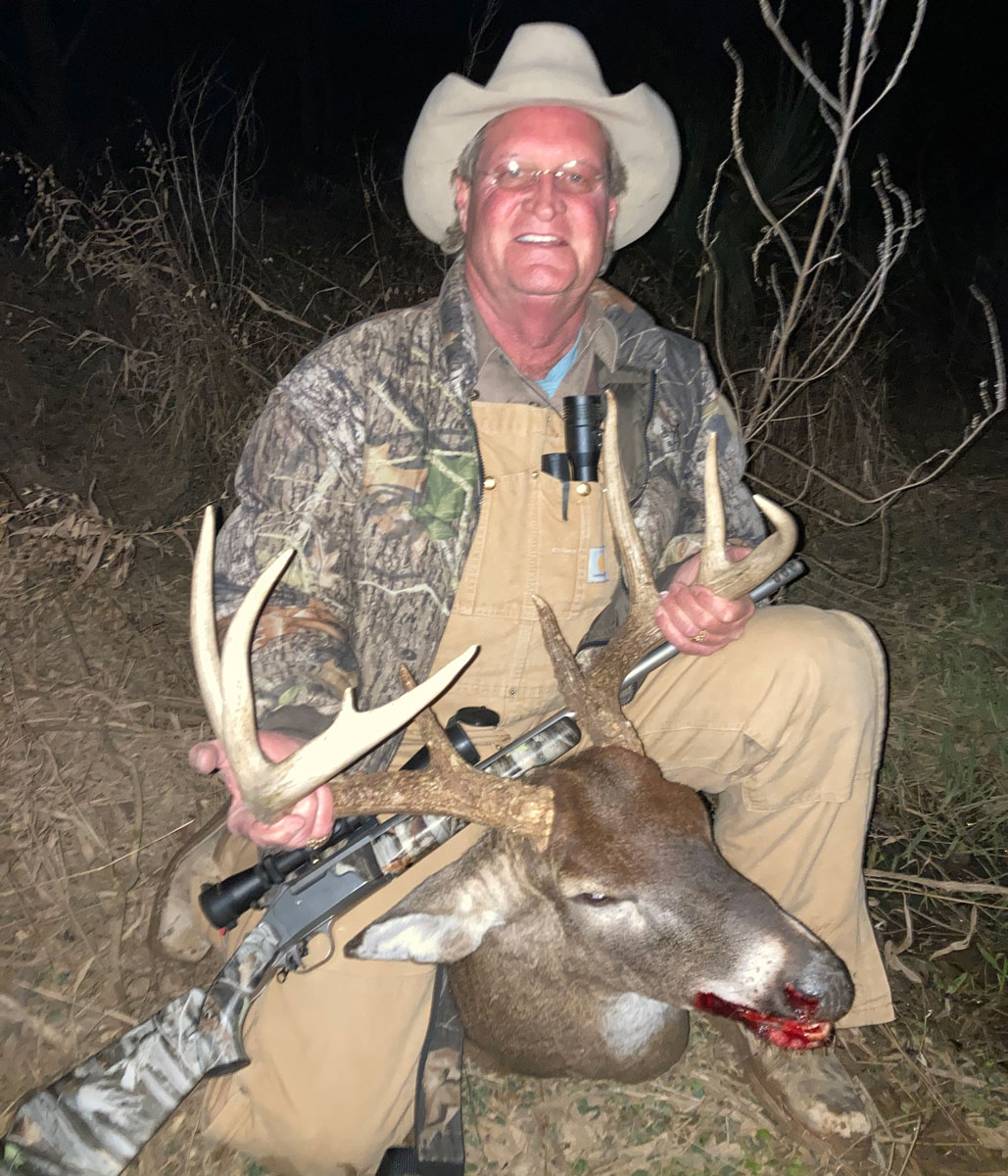 If ever there was a buck that refused to go down, it has to be an old 8 ½-year-old 9-point that survived being grazed last season by an arrow and had his brisket creased by a bullet. This season, it took three well placed shots with 300 grain bullets to finally put him down for good.

Gordon Sorey shared the story of this big buck that he has known about for at least six years.

“I found his shed antlers for the past six years and the buck was estimated to be at least 8½ years old,” Sorey said. “Last year, he came out on a neighbor who was bow hunting. He released an arrow that grazed his back. Then before the season ended last year, my daughter was on a stand when the buck appeared in a thicket out from the stand but she could only see his head and neck.

“Even though he was in brush, she estimated when his vitals were and took a shot. Her bullet clipped him just under his rib cage.”

Ten days before the season ended last year, the buck was back on camera, so Sorey knew the buck had survived both the arrow and bullet. He had dropped one of his antlers and Sorey decided not to hunt him since he didn’t want to take a buck that big that had only one antler.

“I kept feed out this year until March and April and my neighbor and I started getting him back on camera this year,” Sorey said. “I have two stands on the property, one on the south end and another on the north end. On Thursday, Jan.. 27, I was hunting from my south stand, my phone ‘pinged’ alerting me to a photo of the buck at the feeder next to my north stand at 5:59.”

The following afternoon, Jan. 28, Sorey elected to sit on the north stand to see if the buck would make another appearance during shooting hours. His friend and long-time hunting buddy, Charlie Thomason, sat on the south stand.

“I had a doe and two yearlings hanging around my stand,” he said. “At around 5:30 I looked up to see a big bodied deer at 165 yards, but low-hanging limbs obscured my vision. I thought it was a big doe until he put his head down to nibble on oats on the food plot. Then I knew it was the big buck.”

Sorey shoots 300 grain bullets through a Knight KP1 rifle n .45-70 caliber. He first scoped the buck out with his binoculars to confirm it was the big one, laid a glove on the shooting rail and readied for a shot.

“He had turned and was quartering away and was headed back into the palmetto and weeds so I shot,” Sorey said. “When I did, he flipped over and as I was reloading, the buck lunged into the palmetto. He fell on his belly but I could see his head and neck so I put another round into him.” 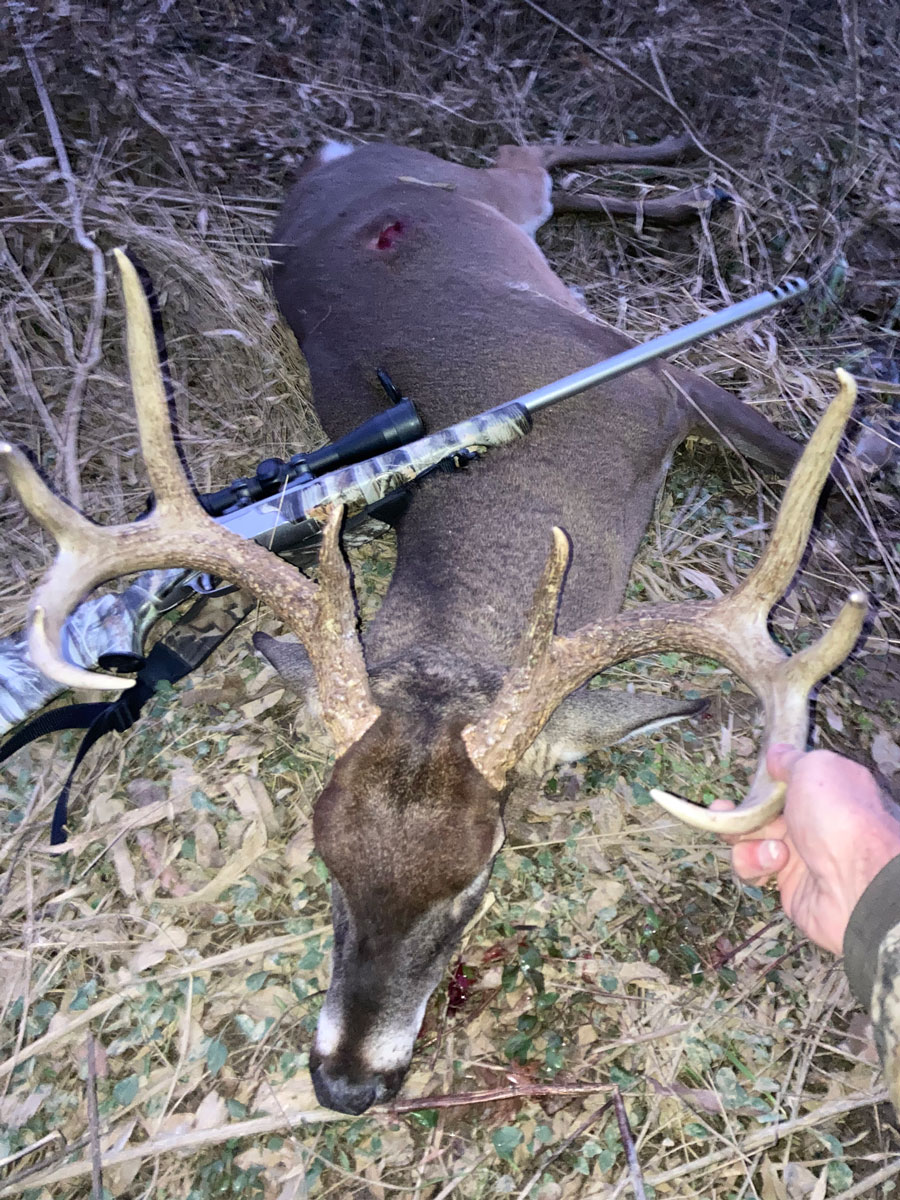 Surely that was enough to put the buck out for good, but that wasn’t exactly what happened.

“I got down, went to him, laid my rifle aside and was prepared to drag him out of the palmetto, but as I sent a photo to Charlie before I pulled him out, I turned around and the buck was back on his front legs trying to get up,” he said. “It took a third shot to finish him off.”

The buck carried a rack of 9 points with an inside spread of 20 inches. He was not officially weighed but Sorey estimated the deer weighed around 235 pounds.

“It took all Charlie and I could do to get him loaded,” he said.

Buck Master scorer, Cecil Reddick, put the tape on him and measured 158 5/8 inches.

“I want to give Charlie Thomason credit for the fact that every time he and I hunt together, something good happens,” Sorey said.

Taking the buck to Poindexter Taxidermy in Mangham, the jaw bone showed the buck to be at least 8 ½ years old.