You just gotta go to know.

When Shawn Hall woke up Saturday morning, Oct. 20, rain was pouring outside, so he went back to bed. But he realized it was his only day to hunt last weekend, so he eventually grabbed his gear and slicker suit and headed for his deer stand.

Turns out, it was a wise move.

About an hour after climbing into his lock-on stand, he arrowed a 10-point buck with a green score pushing 150 inches.

“I had a history with this buck as I’d seen him several times on trail cameras and knew he was a good one. I started seeing him when he was 3 ½ years old and the next year, I had a chance at him at 10 yards but a doe with him had me pegged and I never had the chance to draw my bow,” said Hall, 38, who lives in Marthaville.

He hunts a 1,000-acre plot, part family land and part leased property immediately behind his Natchitoches Parish home. The area he prefers to hunt is a fairly open hardwoods with lots of acorns already falling.

“I got in my stand about 24 feet up the tree around 7:20 and it was still raining steadily. I hadn’t been there long before a doe and yearling appeared feeding on acorns. About that time, I heard two different bucks grunting; one behind me and another out front. The doe walked past me and behind me headed toward the buck grunting in back of me,” Hall said.

As he began looking for the source of the grunting behind him, he wasn’t able to see because of the thick cover and the steady rain. Then he turned and looked forward — and there stood the big 10-point at 35 yards, moving in the direction the doe had gone.

“The buck was moving at a pretty good clip and by the time I was able to turn around and draw my bow, the buck had already gotten past one of my shooting lanes and all I could see was from his front legs back. I took the shot although I knew it was a bit far back,” Hall noted. 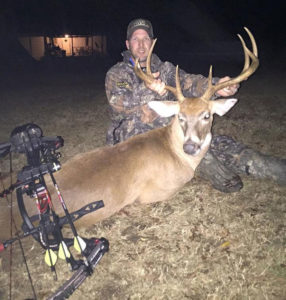 He shoots a Hoyt Carbon Element bow with an arrow tipped with a 100-grain Muzzy broadhead.

Knowing because of all the rain,there wouldn’t be a good blood trail to follow, Hall called his dad and father-in-law, telling them to bring their blood-tracking dog, an 11-year-old yellow lab named Jersey.

“She’s old and arthritic and we’re training a younger dog, but decided we needed the years of experience the old dog had. Within two minutes, she found the buck dead; it ran only 70 yards. This is probably the last deer she’ll ever have the opportunity to track,” Hall said.

The buck sported 10 points, carried a 19-inch inside spread and mass that continued through the entire rack. The 5 ½ year old buck weighed 200 pounds, and was green-scored between 145 and 150 inches.