Deer will put soft mast on their menu early in the fall when the fruit begins to ripen. Hunters need to be able to recognize it, pay attention to it and set up close by.

September brings mixed emotions for deer hunters. We are longing to get afield, but at times, the sweltering heat makes it difficult to bear. For those of us who do not have large agriculture fields to hunt, we should be focused on one thing and one thing only: soft mast, the key to early season success.

That was the case for me once as I sat along the edge of a fallow field. Some earlier scouting had shown me loaded persimmon trees along one of the edges. Knowing that persimmons are a favorite wildlife food in September, I set up an ambush point. Just after daylight, a mature buck that had been feeding on the persimmons was making his way back to his bed. He didn’t make it.

What really is soft mast, and how do you know what the best soft mast is for deer? How many different kinds of soft mast are there that deer key in on, and how can you manipulate them for your benefit?

Mast is a term used to describe a type of food or fruit that trees and bushes produce. Fruit trees produce soft mast, while oak trees, hickory, beech and others produce hard mast. Soft mast typically involves foods such as berries, plums, pears, persimmon, muscadines, scuppernongs, crabapples, apples, poke berries and others. Knowing how to identify these soft-mast species can help you maximize your early season success.

Let’s look at these major foods individually and learn how you can identify them and use this deer candy to put a big buck on your wall.

American Persimmon, Diospryos virginiana,is without question the favorite soft mast to find in the deer woods. When ripe, it produces a light-orange fruit about the size of a golf ball. This delicious fruit will attract every animal in the forest when they are falling: fox, coyote, squirrels, rabbits and, of course, deer. But locating persimmon trees is not the only thing you have to worry about. Persimmon trees are dioecious trees, which means that the trees are separated into male and female. Only the female tree produces fruit. There is no way to tell the males from the females except during the flowering and fruit-bearing season.

The field with the persimmons I mentioned earlier had far more male than female trees. Scouting in the summer when fruit is growing is the best method of determining if a persimmon tree bears fruit or not. I can assure you one thing: every animal in the forest knows where the female persimmon trees are, and they will flock to them in September. If you don’t learn anything else, learn to identify persimmons and hunt them.

If you are preparing a food plot for deer, always throw in several female and male persimmon trees to help you along. You have to have both for the female to produce fruit. 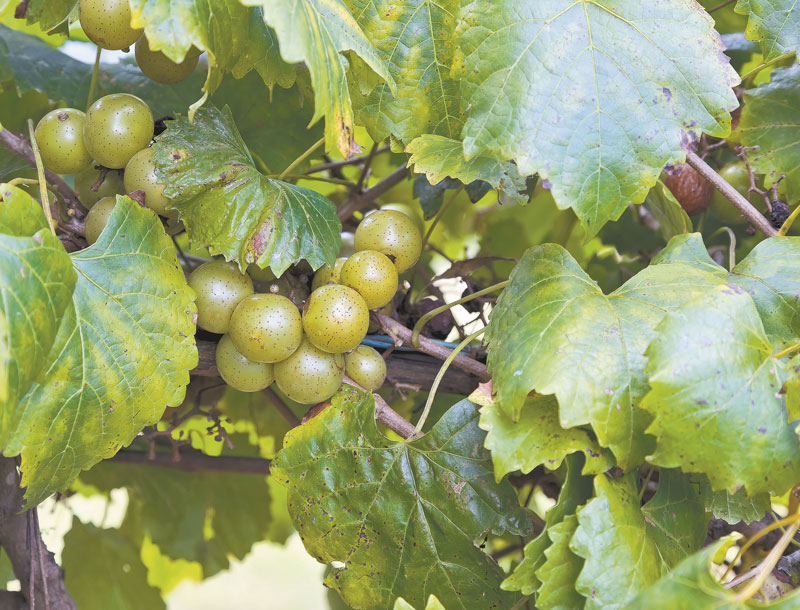 Muscadines and scuppernongs are a variety of muscadine grapes that share the same biological name, Vitis rotundifolia. The scuppernong is the state fruit of North Carolina. These two are next on the important list of soft mast to hunt. These wild grapes, as some call them, are plentiful, and wildlife will voraciously feed on them. Muscadines are dark, while scuppernongs are pale in color. Both are incredibly tasty, and when I find them, I gorge myself on them.

Healthy vines will climb to the furthest reaches of trees and can be difficult to spot since their leaves are usually well up in the trees’ canopies.  Locating the vines is one thing. Setting up at the one the deer will visit is another. With so many vines in the forest, it can be difficult to isolate which ones the deer will be attracted to, but knowing where they are can be the difference.

Growing up in Saluda County, S.C., very few homesteads were missing a muscadine arbor. Growing this favorite fruit was not only commonplace, but it also seemed to be a requirement. This tasty fruit was famous for making excellent jelly and preserves. Muscadine and scuppernongs are also fine table fare for any industrious teenager looking for a snack.

Both muscadines and scuppernongs are able to thrive in deciduous and pine forests of the South, from the high mountains to the maritime forest. Florentine explorer Giovanni de Verrazzano documented the abundance of scuppernongs (named for North Carolina’s Scuppernong River) while exploring the North Carolina coast near Cape Fear in 1524.

Typically maturing from Labor Day to mid-September, the muscadine grape is a favorite of hunters and animals. Though these grapes tend to grow best in fertile, sandy loam and alluvial soils, they also grow wild in well-drained bottomlands and are not subject to extended drought or waterlogging. Both muscadines and scuppernongs are readily available afield.

Southern Crabapple (Malus angustifolia)is a shrub tree that will reach heights of 20 to 30 feet in some areas. It loves pine forests but can be found in mixed forests. It prefers edges where sunlight is not hindered. Crabapples produce crops in 3 to 4 years and reach full abundance in 6 to 7 years. This, too, is a great crop for soft-mast manipulation. The fruit is palatable to deer, and it will attract them, typically from late September to early October. I have seen deer feeding on crabapples as late as the end of October, but this is not common.

Honey locust (Gleditsia triacanthos), not to be confused with its cousin, black locust, is another favorite food source for white-tailed deer. Easily identifiable, the trunk will have large thorns, some reaching three to four inches long. The large seed pods resemble green bean pods but are 15 times larger. Measuring around 10 to 12 inches longer and 2 to 4 inches across, these large seed pods are a delicacy for wildlife and when producing, can be a ticket for killing big bucks.

In some cases, honey locust is considered an invasive species and has been known to spread rapidly. It is still a desirable food source for wildlife in general and deer in particular. Where it is found growing wild, the honey locust tree is one of the favorites. Similar to the persimmon, the honey locust is a tree that every animal in the woods knows where to find. If you are able to locate one, set a stand immediately and get ready. Even though the pods will begin dropping in September, deer tend to focus on them after they have dried and hardened. If you are looking to plant honey locust, be certain that no livestock can access the plant.  It can be toxic to humans and livestock.

Soft mast is a personal favorite for early season success. Locating these delicacies will put game in your sights and trophies on your wall.