Special relationship is mutually beneficial for the Sanders

Theirs is a relationship and a story that transcends most father and son hunting kinships, little 13-year-old Jason and his dad Dana Sanders, who recently celebrated the youngster’s first deer taken with a bow.

It takes just a few seconds of talking with the father to understand his dedication to the son. When he speaks of his boy, Dana doesn’t just say Jason, he refers to him as “my Jason.”

And, it becomes quite obvious that they need each other, love each other dearly, and benefit from each other, especially when it comes to their hunting trips.

Here’s the deal. Jason was diagnosed with cerebral palsy at the age of 14 months. His body is severely weakened by the horrible affliction.

“His limitations are fine and gross-motor related, which means that he can’t walk and has muscle tone that requires him to use a wheelchair for most of his getting around,” Dana Sanders said. “He can use a walker with some assistance.”

A longtime hunter with two older sons already in college, Sanders now concentrates on sharing his love of the outdoors with Jason. It is a story with several successful chapters already written.

It’s also one that has reached out and touched others.

“My Jason has hunted with us for several years now,” Sanders said, with us referring to his wife Adrian and other sons Nathan, 24, and David, 20. “Two years ago, we took him to a Hope Outdoors Disabled Hunt where he killed his first buck, a small spike. The recovery of that first buck exceeded 2.5 million views on Facebook.

“Last year, I had someone reach out to me that wanted to take him to South Texas where he took a 135-inch 9-point buck. The recovery of that buck exceeded 8.5 million views on the Trinity Outdoors Adventures Facebook page.”

With each success, the eagerness of the young hunter grew.

“This year, my Jason told me that he wanted to kill a deer with a crossbow,” Sanders said. “Not wanting to spend a fortune on a new crossbow, I posted on Facebook if anyone might have a used crossbow they would be willing to sell me for Jason.” 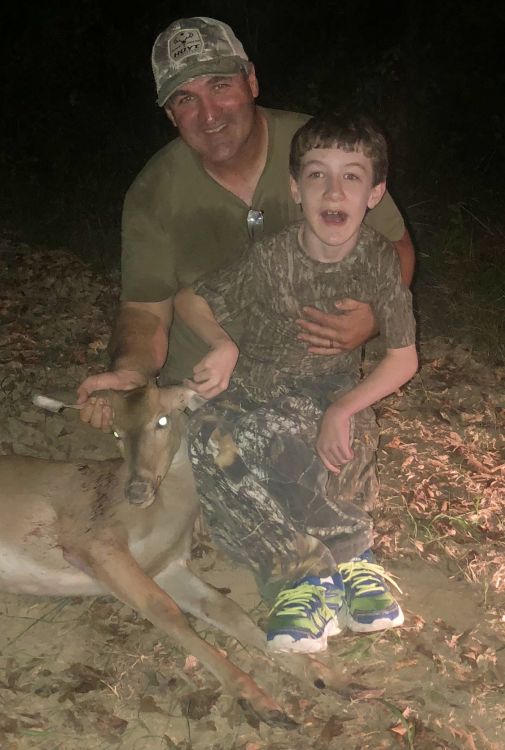 His request was quickly answered.

“A lady by the name of Jan Nolan sent me a Facebook message telling me of her husband’s recent passing and that she would love to give her late husband’s crossbow to my Jason,” Sanders said. “It just so happens that she attended the same church that we had been visiting and had recently joined.

“So on a Sunday morning, Mrs. Jan brought her husband’s crossbow and presented it to Jason. Tears were shed and many hugs were shared. I knew that I had to put some effort into making this happen and get it done.”

Sanders is a native of Vicksburg, but his father’s business opportunities took him to the Mississippi Gulf Coast where he eventually joined his dad in a wetlands consulting business. With the two oldest sons in college, Dana and Adrian decided to move back to the family farm in Claiborne County where they could home-school Jason, not to mention be very close to some outstanding deer hunting.

Over the past few years as the youngster began hunting, the dad studied up on hunting techniques and equipment for the physically challenged and got creative. He also got help from friends, like gunsmith Jimmy Bagby from Firearms Outfitters in Vicksburg, who built and gave a custom .257 Roberts rifle with a 2.5-pound trigger to the youngster.

“Sitting in the blind, we utilize a handicap activity chair that has straps that hold Jason up and has hydraulic cylinders that can raise him up and down,” Sanders said. “My Jason sits to my left and I shoot off my left shoulder. Jason is able to look down the crossbow (or gun) at the deer as I look through the scope. Then he reaches his hand under the trigger guard and pulls the trigger when I give him the signal to do so.

“It’s how we’ve taken most of his deer with a gun. I want Jason to be as much in control of the hunting event as possible. Pulling the trigger is all him.”

On Monday (Oct. 8), Dana and Jason took the crossbow to the stand.

“We got in the stand around 4:30 to beat the heat,” Dana said. “I had already taken his chair and Caldwell Field pod to the stand the day before. Hunting with my Jason requires some planning ahead.

“It was a warm sit but the electric fan kept us from getting hot and helped keep the mosquitoes off of him. We had not seen anything and it was getting late, and I was pondering going ahead and getting everything packed up when I heard footsteps to our right.”

The hunt was on.

“I said ‘Jason, there’s a deer coming up the road right next to the blind, be still and very quiet,” Sanders recalled. “Jason’s breathing and posture changed and he said, ‘Papa, my heart, can you hear it?’

“The deer came out in front of the blind at only 17 steps, and we went into our routine. I got behind the crossbow and settled the crosshairs on the deer. Jason was grabbing for the trigger and I helped him get his finger on the trigger. Then I gave him the go ahead. He jerked back on the trigger very hard causing the crossbow to fire.”

The deer jumped and ran off. It looked like a solid hit.

“Jason was squalling and so happy,” Sanders said. “We got out after a bit but found no arrow or blood. I called a friend of mine with the Mississippi Blood Trailing Network and he brought a dog. They found the deer.

“My Jason has now taken a deer with his archery gear. It was a really awesome time and we owe it all to Mrs. Jan who gave my Jason her husband’s crossbow.”

The dad’s dedication to his son is obvious, but it’s a mutual beneficial relationship, giving the elder Sanders a solid reminder of what the outdoors should be about.

“I’ve had the privilege to have hunted some great places in Mississippi and Louisiana over my 35 years of deer hunting,” he said. “I’ve taken a lot of deer. I still enjoy hunting but really like the preparation, and holding out for a nice buck. Hunting with Jason however, brings back those emotions that I used to get when I’d see a deer or kill one.

“His joy and excitement is contagious and takes me back to what hunting should really be about. In a day and time where big antlered bucks get all the spotlights, there’s my Jason, showing me what it’s really all about.”

You can listen to the audio from the celebration after the bow kill in the video clip.