When Maria Ellis, 35, of Baldwin, entered the Louisiana Department of Wildlife and Fisheries office to collect the alligator tags she’d won for the Sherburne WMA lottery hunt, office personnel looked at her a little sideways. In their defense, they probably don’t see many alligator hunters who are women.

“You can send him in…” one of them said, nodding towards the parking lot.

Ellis said that the tags were hers. “I’m a female…” she said, and then she laughed. She could not know it, but she would be doing a lot more laughing in coming days. Indeed, she’d be laughing last, thanks to an 11½-foot alligator taken from Big Alabama Bayou.

As Ellis, her brother-in-law and helper, Bryan Mires, and a photographer, Craig Weenum, approached the first line of their 6-line set on the afternoon of Sept. 6 and spied the 11 ½-foot alligator on the bank, the laughing was more of the nervous kind.

“No, there’s no way that gator is on our line.” someone said.

They took some pictures, and then the alligator slid down off the bank. As the boat drew near, the alligator began to bob up and down, pulling at the line.

“The gator definitely knew that he was caught,” Ellis said. “It kept rising and falling in the water, tugging on the line.”

When the boat got close, the alligator went down in the water.

“My brother-in-law grabbed the line, and pulled the gator close to the surface so I could shoot it,” Ellis said, “but the alligator kept submerging, fighting the line, and the boat rocked each time that it sank into the water.”

Ellis kept thinking: “Oh my God, he’s going to knock the boat, and I’m going to fall into the water.”

Each time the boat rocked, Ellis climbed up and down to the gunwale. All that movement made for a difficult shot.

“You get this natural high; you feel flooded with all these emotions, and you’ve got to work through them and do your job as humanely as possible,” said Ellis who fired four times. Two of her shots hit the alligator’s “soft-spot,” but the last one killed the gator.

“I heard the gurgle on the fourth shot; that was the kill-shot,” Ellis said. 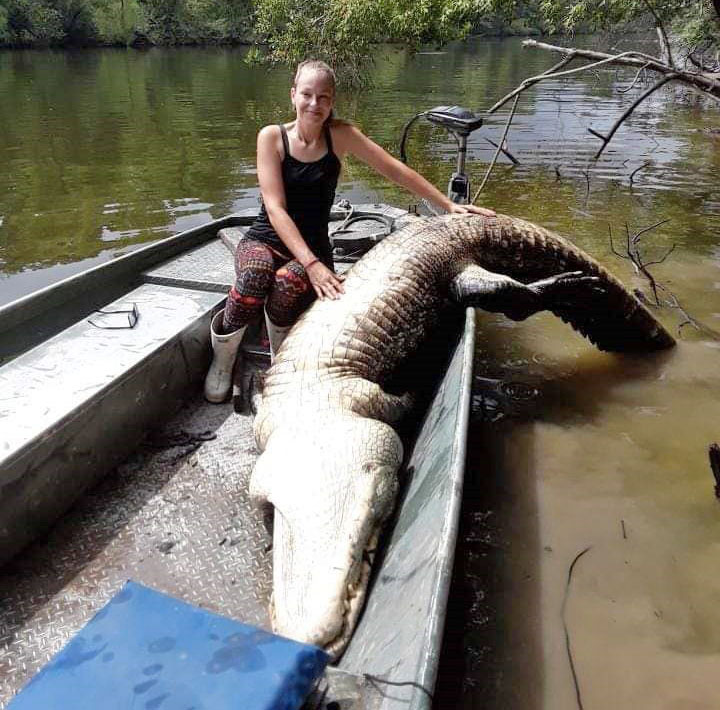 “We had to pull the alligator to the bank because we couldn’t lift it into the boat without some kind of leverage,” Ellis said. “We pulled the boat parallel to the bank, and my brother-in-law got out.

“The three of us hauled it into the boat,” she said. “It actually took us between 45 minutes and 1 hour to get it in; it was a struggle.

“There’s no way I could have handled that 11½-foot gator on my own,” Ellis said. “When we got to my sister’s house, we had to use a tractor to pull it out of the truck.

“We never expected to pull up on a big, old gator like that,” Ellis said. “You can see the excitement on our faces in the photos of us pulling the gator out of the water.”

“We were elated to get a gator that huge. It’s a once in a lifetime gator.”

Three gators and something to be proud of

In the next few days, Ellis would fill her remaining tags with a 9-foot-9 gator she harvested on Little Alabama Bayou and a 7-foot-4 gator from Big Alabama Bayou. 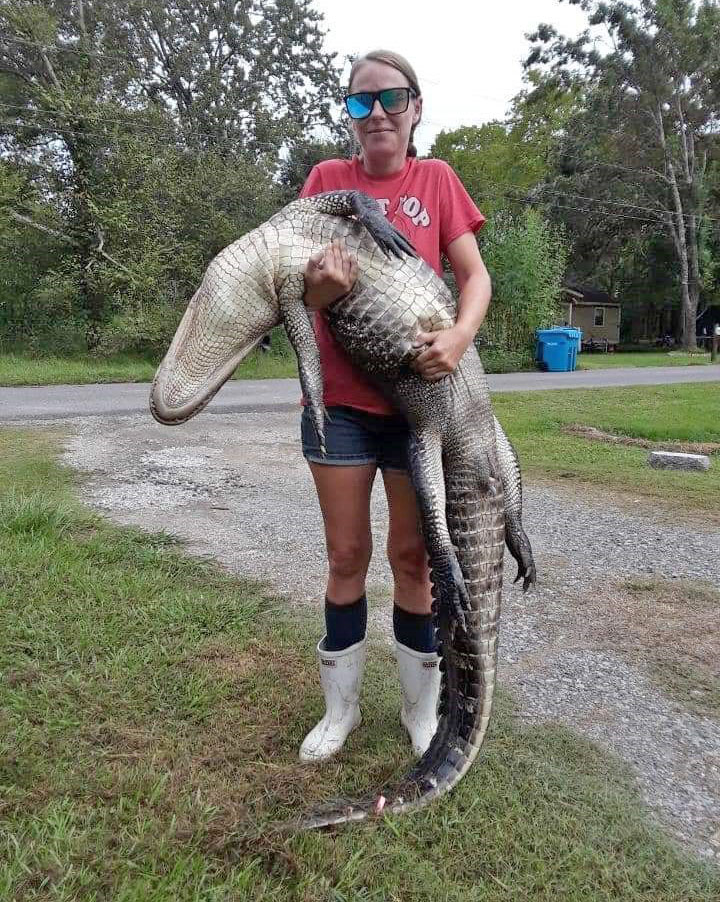 Ellis wrestled the 9-footer into the boat by herself. She’s very proud.