It’s become clear that we have an full-scale epidemic on our hands. Louisiana anglers are becoming outlaws at an unprecedented rate, and no one is immune. Boaters, kayakers and bank fishermen all are increasingly being called out and are unwelcome in areas they have always fished in the past.

Why is this happening? Louisiana’s trespass laws allow landowners to lock anglers out of most coastal marshes. In recent years, more and more landowners are deciding to do just that in an attempt to protect their property rights as they watch their land dissolve into open water.

It’s a problem rife with complexities, and it’s becoming more problematic every year as landowners flex their muscles and more anglers out for a good time in Sportsman’s Paradise are harassed, ticketed, prosecuted and fined.

Landowners and oil companies are trying to find ways to hold on to their precious land and subsequent mineral rights. And many are pouring lots of money into projects to protect and build their land, because if they don’t, it’s only a matter of time before they will lose it.

Oil companies are no stranger to lawsuits in this sue-happy economy, and for this reason some are leery of allowing the public to access their properties.

This wasn’t always the case. For years, as oil companies dug canals through our marsh for easier navigation, they welcomed anglers to fish in the newfound habitat. And as time marched on and canals were dredged and re-dredged, these became the highways of the marsh, beating out the bayous as primary waterways.

With limited exceptions, Louisiana considers any water that wasn’t mapped at the time of statehood in 1812 to be privately owned, even if those waters ebb and flow with the tides.

That makes it nearly impossible for anyone with a boat to enjoy a day on the water without, at some point, crossing invisible lines separating public and private water.

To craft an analogy of the current tidal-water-access situation in Louisiana, the president and CEO of Backcountry Hunters & Anglers, Land Tawney, had to reach all the way back to a book written in 1883 by Howard Pyle.

“It’s the European model, right? Think about Robin Hood,” Tawney quipped. “It was penalty of death if you got caught killing the king’s game or hunting the king’s forest. We wanted our country to be different.”

Certainly no one in Louisiana has been forced to sit in Ol’ Sparky for fishing private water — or at least not yet — but that doesn’t make the situation any less alarming to men and women who watch the clocks in their cubicles all week, fantasizing about getting out in the marshes on the weekend.

More and more frequently, anglers are getting harassed by landowners or their lessees, who are claiming exclusive rights to tidal water, often in expansive areas with no discernible boundaries or markers. Even worse, waters from Leeville to Lafitte, Dularge to Delacroix are sporting gates at primary access points, allowing the public’s fish to enter, but certainly not the public.

In every other coastal state, tidal water, no matter where it flows, belongs to the public, and access to it may not be hindered. That’s why Tawney’s organization has joined the battle in the Bayou State, to right what he views as a grievous wrong.

“While I’m not from down there, I’ve definitely got some of that marsh in my fingernails, and I love the culture and the people,” he said. “We have plenty of members who are generational down there. They see this as a way (landowners) are trying to push out the small, average man or woman, and we want to make sure we push against that.”

Tawney said there have been court cases in North Carolina, Florida and California in which landowners fight to keep members of the public off the beaches behind their homes, but the laws are so clear, very few landowners even attempt to forbid access to the tidal waters adjacent to their property.

“It’s a problem that’s unique to Louisiana,” he said.

Mike Benge runs Delacroix Corp., a land-holding company with property in Plaquemines and St. Bernard parishes. The company’s holdings include Bayou Gentilly, Little Lake (Lake Petit) and Four Horse Lake, as well as most of the marsh ponds anglers typically fish out of Delacroix.

“All this legislation could force a change (to Delacroix Corp.’s open-access policy). There’s no doubt about it,” he said. “I have stockholders and board members who would like me to charge money. They’re stockholders of this corporation for a reason — to make money. Fortunately, we have been able to make enough money in oil and gas, which has been really, really depressed the last five years. We’ve survived on our alligators and our duck leases and our launches that we charge people to use. We have an inherent motive for providing fishery access. We built a couple boat launches, and we make a little bit of money with those.

“I don’t for a minute believe that the issue is as dire as the (Louisiana Sportsmen’s Coalition makes it out to be.) Editor’s note: Louisiana Sportsmen’s Coalition is not affilitated with Louisiana Sportsman magazine. I’ve sat through hearings, I’ve listened to stories of people with AR15s running poor little children off their fishing leases. Nobody I know in the landowner business has anybody riding around the marsh with an AR15, okay? But it sounds really great when you say that in front of (the legislature).

“The narrative that’s being played out, I think, is bad for the state. Landowners who don’t have as much land as I do, and who depend on whatever income they can generate from their property to continue to maintain (it) or pay the taxes and hold onto what little bit they have, that’s their right.

“This is being driven by a small group of commercial guides who are making money using private-property resources. If I go to (the Louisiana Sportsman magazine) website and look at all the guides fishing in Delacroix Island and Shell Beach, everybody’s catching fish. Nobody’s having trouble catching fish. Everyone’s buying into the frenzy that fishing’s off-limits in Louisiana, that you can’t catch fish anywhere. That people are running around with AR15s running off high-school kids and their bass tournaments.

“Most of the landowners I know who’ve put (their property off-limits), either it’s areas where nobody catches fish or they’ve allowed people to get a lease. And that was one of the suggestions of the Sea Grant study. I don’t think that’s an unreasonable solution. It’s not my (solution). I’ve had people call me because of all this foolishness looking to buy a fishing lease, and I don’t have fishing leases. About 65,000 acres of my property is open to the public to fish, within reason.

“It’s a very, very small percentage of people who are whipping this up into far more damaging manner (than it is). The law’s not going to pass, the House bill (HB231). We’ve already been through it. It’s unconstitutional. The state cannot afford to take the private property of its citizens. We have paid for this property. We’ve paid the taxes. The minute the state gets into a taking situation, as they’re finding out with Catahoula Lake — you can only flex your muscles so long, and then the chickens come home to roost.

“People are exercising their rights, and these rights were guaranteed by the constitution of the United States. The right to own property is a fundamental right.”

Daryl Carpenter is hoping the tide, as it were, begins to change in the 2019 session of the Louisiana Legislature, which began on April 8. Carpenter, who serves on the board of the Louisiana Sportsmen’s Coalition, is watching three bills in particular that address different factors of the public access problem.

The most important, in Carpenter’s view, is HB231, a follow-up to the much-discussed HB 391, which was defeated 59-37 by the legislature last year. The new bill “provides for the public navigation of running waters, including those running waters passing over any privately owned water bottom directly connected to a state-owned water bottom that is subject to the ebb and flow of the tide.”

“It’s basically the language from 391, except it looks like it wasn’t as rushed when it was put together,” he said. “The language is much more detailed. The reasonable exclusions are already in there, such as ports, sensitive areas such as Homeland Security and Port Fourchon, stuff like that.”

Carpenter is also tracking HB270, which “requires proof of private ownership of immovable property when criminal trespass is upon a river, stream, lake or other waterway,” according to the bill’s digest.

“It’s more of a stopgap in case something doesn’t happen on the access side,” Carpenter said. “It affects the ability to be charged for trespassing on these dual-claim areas where the state claims it, but a private landowner claims it also.

“The bill, as I read it, would stop anyone from being charged with trespassing in those areas because the prosecuting authority would have to prove title. If that title is in dispute, then it would be much more difficult to prove title. That’s the thought behind the bill.”

The third bill on Carpenter’s radar is HB165, which “requires that agreements between an acquiring agency and a landowner for integrated coastal protection projects ensure public recreational access to lands and waterways reclaimed.”

It would apply mostly to projects headed up by the Coastal Protection and Restoration Authority, according to Carpenter.

“It requires public access on future CPRA projects in the cases where they acquire title,” he said. “My personal opinion is public money is public money. Public money is being spent on all CPRA projects, so I don’t know why it should be limited to only those in which they acquire title, and I don’t feel like this bill is going to have very much of an effect because, as I’m told by legislators and others, there are very few projects in which CPRA acquires title.”

Still, Carpenter said, he’ll support this bill for the situations in which title is acquired by CPRA.

Carpenter will be a frequent visitor over the next few weeks to the state’s capitol, and he encourages other anglers to do the same. 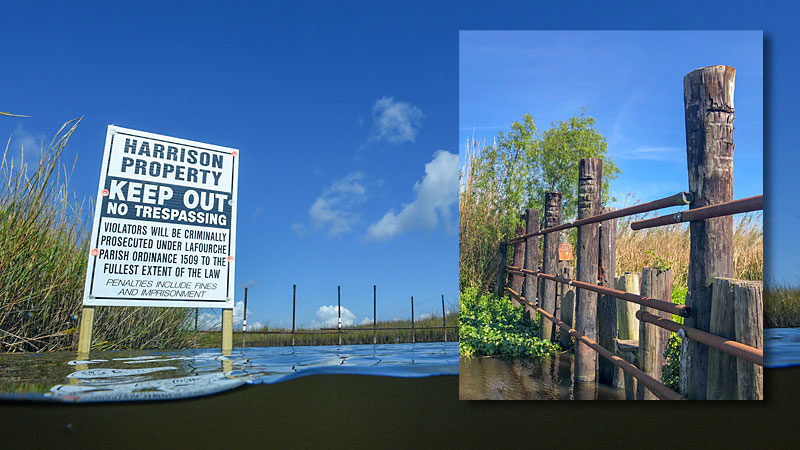 Or, as Tawney would put it, it’s going to be Robin Hood. 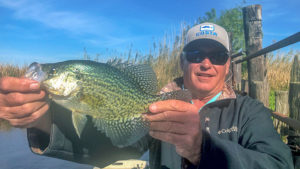 The Louisiana Supreme Court awarded him the title to the Company Canal in 2003. He closed it for public use in October 2007.

Gheens residents argue that the Company canal, in use since the 1800s, should be considered public. Many residents used the canal, dug between Morgan City and New Orleans in the 1830s by slaves, to reach their fishing camps in Lake Salvador. There was even a public boat launch.

At 52,000 acres, Golden Ranch is the state’s largest privately owned refuge according to their website. They now charge people to fish in the canals.

Angler Mike White of Paradis has been fishing Bayou Des Allemands and Salvador for years. In the photo above, he’s fishing at the mouth of the Calfat, a canal gated by Golden Rance Farms, off of the western edge of Lake Salvador.