It had been a 5-hour fight in stand-up gear, a grueling battle that had tested the resolve of every man on the boat, and Donnie Jackson, Jr., a 32-year-old charter captain from Metairie, panted on-deck as he looked down at the massive, 309.9-pound swordfish he’d just landed on June 12, the final day of the Mississippi Gulf Coast Billfish Classic, 400 miles west of Biloxi.

He knew it was a Mississippi state-record swordfish, worth $300,000 in the Classic if he could get it back to Biloxi Marina by 6 p.m.

Despite the 200-gallon fuel bladder he’d brought along, he knew that he’d need to stop in Venice to refuel. Not enough time.

Jackson was joined in the tournament by his father, Don Jackson, Sr. of Metairie, La., Russel Webb of Biloxi, Miss., and Mitch Bronson and Whitney Barron from Alabama.

There had been plenty to keep them worried during the catch. “The fish kept doing these violent headshakes,” Donnie Jackson said. “We’d get him up a little, and then he’d go right back down to the bottom.”

Again, and again, they’d fight the fish to a few hundred feet, and he’d remain at that depth or dive.

“We thought that he was done after 2½ hours,” Jackson said. “It was just a big, big fish.”

Getting this big fish in the boat

It took all five members of the crew to muscle the huge swordfish through the tuna door onto the deck of the Tails-Up Sea Cruiser.

“We had three gaffs in her and a tail rope to bring her in,” Jackson said. 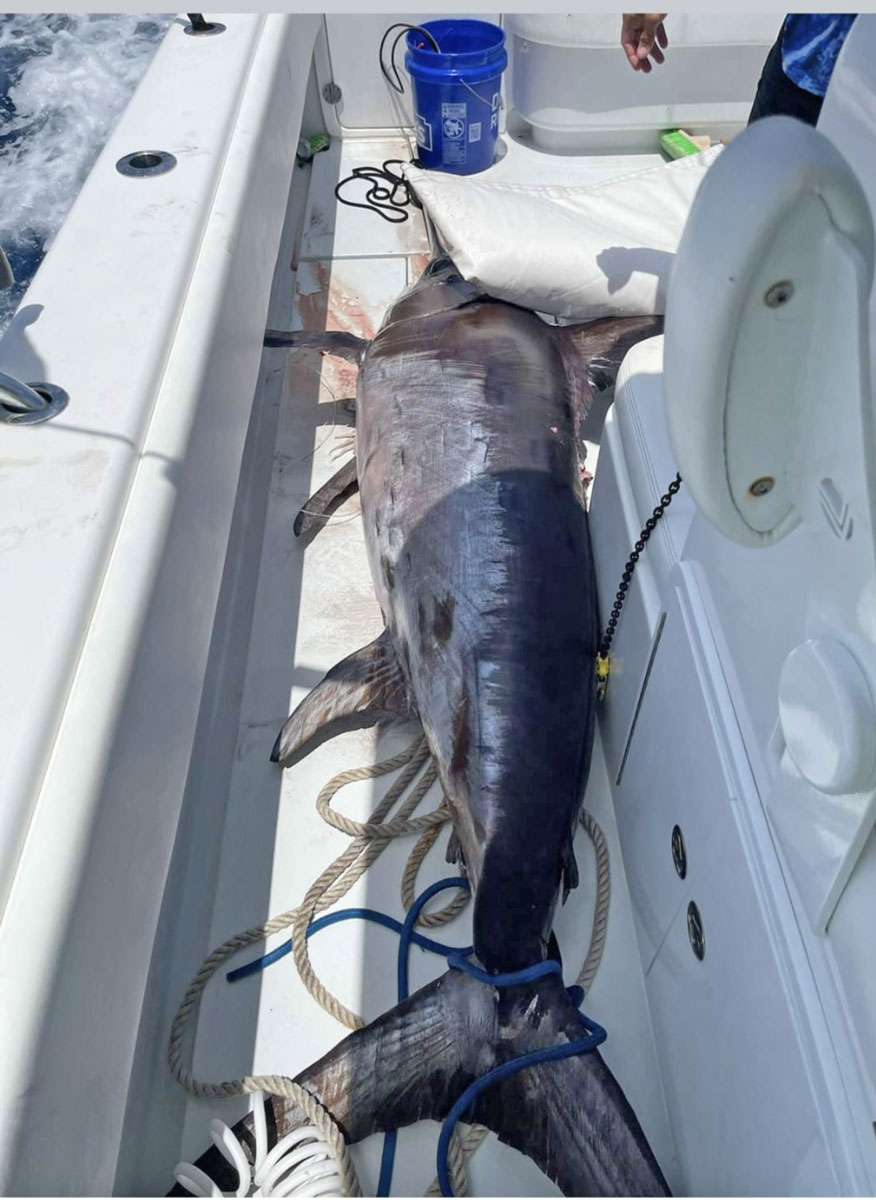 But the fish was onboard. That part of the mission was complete. All the money he’d spent preparing his boat, the work, the time, and the discomfort and stress of spending three days and two nights aboard his vessel. It was worth it. Almost.

They were already an hour behind. Earlier, Jackson had calculated that 11 o’clock was the latest they could depart for Biloxi and make the 6 p.m. cutoff. So, as the triple 425s of his Contender 39 roared to life, he said a silent prayer.

Venice was 200 miles away, so the crew iced the fish even as the boat reached speeds topping 60 mph.

Jackson estimated that they had enough fuel onboard to make it to Red Pass, but he hadn’t considered that they’d be running the motors so hard. The late catch of the record-breaking fish had changed everything.

“When I got about 3 miles from Red Pass, the engines started missing and the fuel lights were flashing; the boat came to a halt,” Capt. Jackson said. “We were out of fuel in our big tank.”

Doubt began to set in.

“We were heartbroken,” he said. “Luckily, I remembered that I saved 9 gallons of fuel in one of my side tanks for this reason.

“I switched the tanks, pumped the fuel bulbs, and we were back in action,” he said. “I had to creep up Red Pass at 30 mph to (stretch) our leftover fuel enough to make it to Venice Marina, which was about a mile closer than my home port marina, Cypress Cove.” 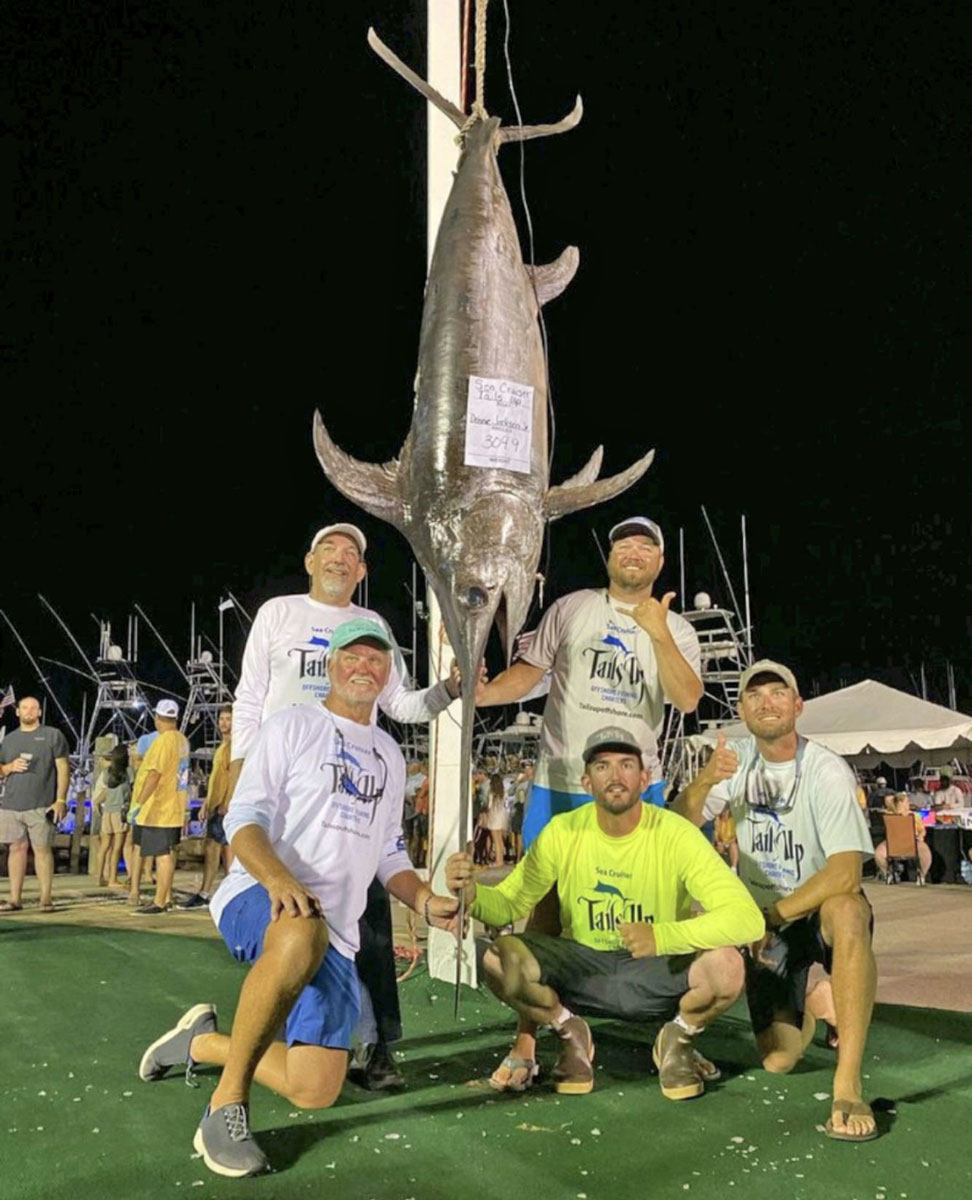 Jackson put everyone on the bow to make sure the boat planed through the water as they made it through the pass.

“There were a few boats in front of us, but I explained to a buddy of mine what was going on, and he let us get fuel before him and use his pump; so, we were able to get 160 gallons of fuel in 10 to 15 minutes,” Jackson said.

Once refueled, Jackson and his crew sped for Biloxi, 90 miles away.

“We couldn’t have one issue happen for us, and make it,” he said. “I ran the boat wide-open from Baptiste Collette to Ship Island on pins and needles, going 64 mph for the last 90 miles.”

Jackson and his crew arrived at Biloxi Marina with 5 gallons of fuel and 8 minutes to spare.

“Luckily, we had good weather conditions,” he said. “Without the 1- or 2-foot seas, there’s no way we could have made it, because we wouldn’t have been able to run as hard as we did.”

Jackson is ecstatic about what this big victory will mean for his business and family, not to mention the well-earned pride that landing a record-breaking fish brings. 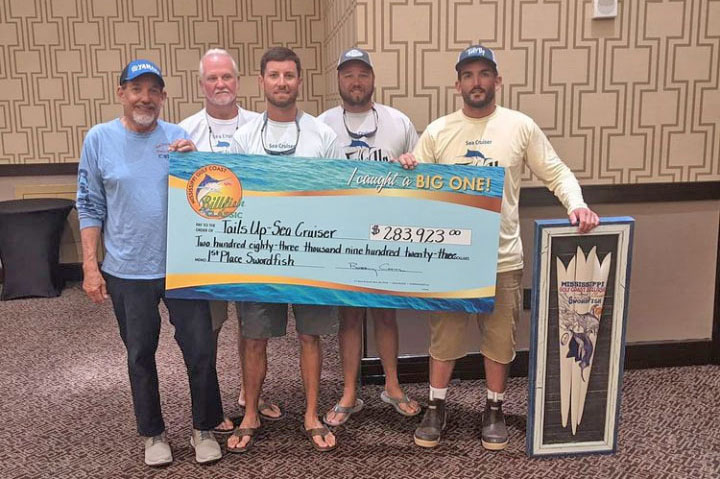 “You know, to catch one 309 pounds in stand-up gear is a huge accomplishment,” he said. “I’ve fished out of Louisiana my whole life and haven’t got one close to that big.

“And it couldn’t have come at a better time,” he said. “It was a great family thing, too. I’m a father of two with a fiancé, and my kids were a part of it. I got to do it with my dad, who’s getting older…. It was just very meaningful. ‘Just a great story.’”

Marsh Man Masson headed down to the Lone Star State to experience some of the legendary fishing near the coastal town of Port Aransas, Texas. […]