A giant 42.6-pound yellowedge grouper was caught last month in the Mississippi Canyon off the coast of Venice. It would have made the record books as the largest ever caught in the state, but it was taken by electric reel and cannot qualify for record status, as curated by the Louisiana Outdoor Writers Association (LOWA).

Most angler’s familiar with yellowedge say a 25-pound fish is impressive. The current state record yellowedge was taken in 2009 and weighed in at 41.9-pounds. This grouper managed to best a state record by almost a pound which is a trophy fish and a catch of a lifetime, even without record status.

Joey Coco, from Baton Rouge, planned a trip to assist Horace Wilkinson, also from Baton Rouge, and a few other anglers with breaking in Wilkinson’s new 32-foot Yellowfin boat. Coco is an engineer by profession and had a detailed plan laid-out for the mostly greenhorn crew. The day started early in the morning deep dropping for swordfish. After the crew managed to land a sword, they shifted gears to red snapper and made short work of their limit, boxing 18 fish.

As they made their way toward Venice, Coco guided the boat to several different spots to make a few dead drops for grouper, which are usually found around the 500 foot depth mark.

“As soon as we dropped it was on fire,” Coco said. “One yellowedge grouper after another. I had sort of a hot hand that day.”

The crew managed to box several yellowedge grouper in the 20-pound class and a golden tilefish for a bonus.

For deep dropping, Coco uses a Banax Kaigen 1000 electric reel paired with a Banax deep dropper rod. His rig is spooled with Sufix Top Shot 80 pound braid and a Sufix Wind-On 200 pound leader. The business end includes a custom 14/0 deep drop multiple hook rig with a hefty size chunk of squid to top it all off.

With the new boat well christened with plenty of catches, the crew made the call to head in.

Since Coco’s plan had gone like clockwork, the crew had plenty of leisure time left to try a few unfished holes. Coco had identified a spot that had irregular bottom features using the Navionics App. Still in the Canyon in about 550 feet of water, they pulled, but with nothing but dead bottom on the sounder (not uncommon with grouper fishing). But then…

“I literally dropped it on that fish’s head,” Coco said. “As soon as it hit the bottom, that fish hit that bait. And the fight was on.”

The fish buried Coco’s deep drop rig. For about 10 minutes the fish had a heavy strain on the electric reel and was managing to take drag from time to time. Eventually, the electrical reel was able to make gains on the fish, and the grouper began to rise to the top. 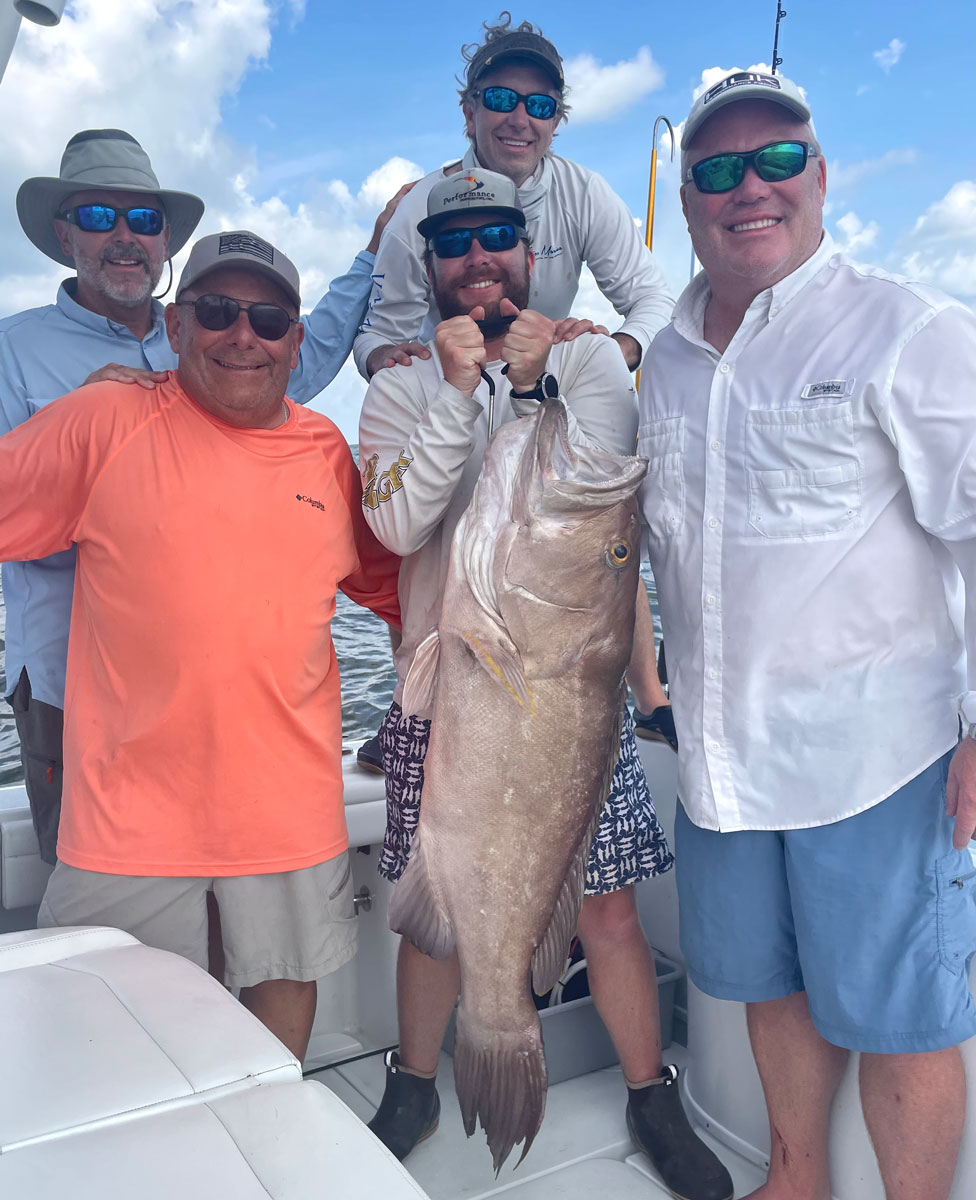 “It ascended to the surface about 40 feet from the boat. We thought it was a Warsaw when it came up just due to its large size,” Coco said. “As we got it to the boat, everyone was hooting and hollering realizing it was a yellowedge.”

On missing out on an official state record, Coco confessed that it was the one time he wished he had hand cranked a fish 550 feet to the surface. In the absence of state record memorabilia, Coco took plenty of pictures and measurements in order to memorialize the fish with a fiberglass replica.

“It will go on my wall and be the source of many future fishing stories at the camp,” Coco said.

You gotta love it when a plan comes together!

And if you’re fortunate enough to land a potential state record fish, be sure to check out the LOWA website, https://louisianaoutdoorwriters.com/awards-records/fish-hunt-records/, for rules and submission requirements.