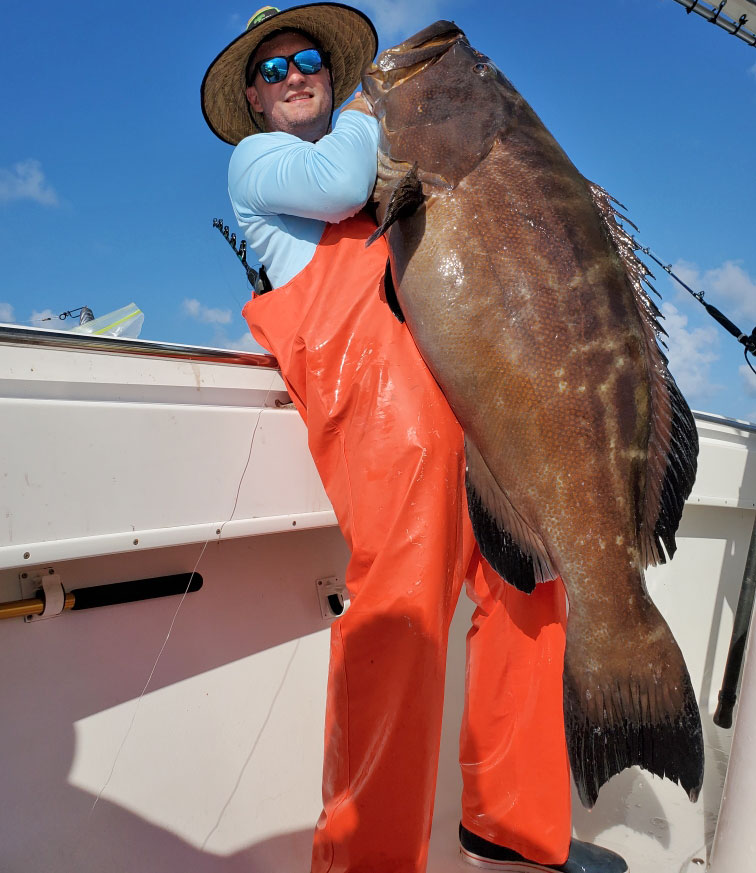 Andrew Godley of Youngsville and his crew won “best boat” at St. Thomas More Catholic High School’s annual fishing rodeo Aug. 6-7 out of Cypremort Point, sweeping the top three spots in the grouper category, taking two of the three top spots in the mahi-mahi and adding a winning amberjack.

Rivers Andre, the son of Chris Andre, who captained the vessel, and his cousin, Izaac Andre, also won mahi-mahi and tuna categories in the youth division.

On Aug. 6, the crew set out on the Thank You, Sugar, a 31-foot Cape Horn cruiser, for a 125-mile trip to the continental shelf, where they planned to fish floating platforms and natural formations.

“(We’d) also heard about a drill-ship out there that people were catching some tuna on,” Godley said. “So we decided to try to hit all of the categories and (fish) overnight for tuna. The first fish we brought in was an 89-pound amberjack that we caught on live hardtail.

The fishermen hit the remote, coral banks and some pipeline crossings in the area.

“We caught four marbled grouper using electric (reels), two of (which) were over 25 pounds, and (we) would have been top-5 Louisiana fish if we’d been using hand-cranked reels,” Godley said.

In addition to the grouper, they also caught some porgies before continuing south to target yellowfin tuna. 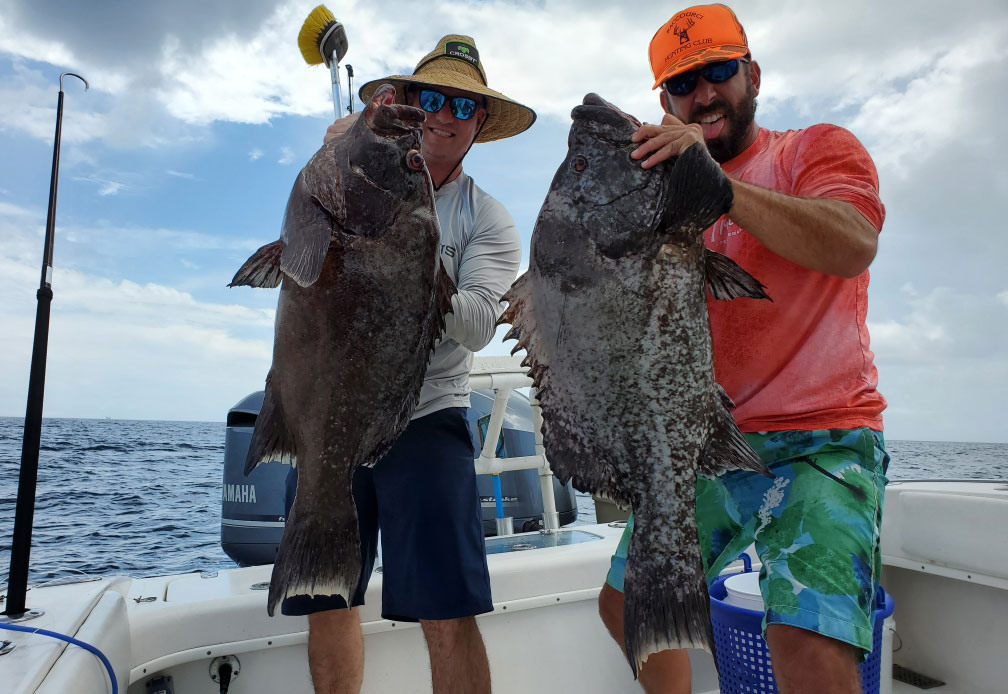 As the sun fell to the west, they hit multiple spots, catching eight yellowfins, some of them on topwater poppers in schools of flying fish.

“The flying fish were hitting the boat and flying over the bow,” Godley said, explaining that crew members had to duck between casts to avoid the flying fish.

“When you hook up … on spinning tackle, it’s amazing. I’ve never heard a (reel) scream as hard as when tuna would make a run; It sounded like it was going to explode.”

“The nice thing is that a fight (with a 45-pound fish) is not as long as it is with a 180-pound fish,” Godley said. “They put up a good fight, but it is short-lived; you can get them in the boat in a few minutes and then keep on fishing.”

After dark, they caught a few mahi-mahi, including a 19-pounder. Rivers and Isaac Andre also caught some blackfin tuna speed-jigging. 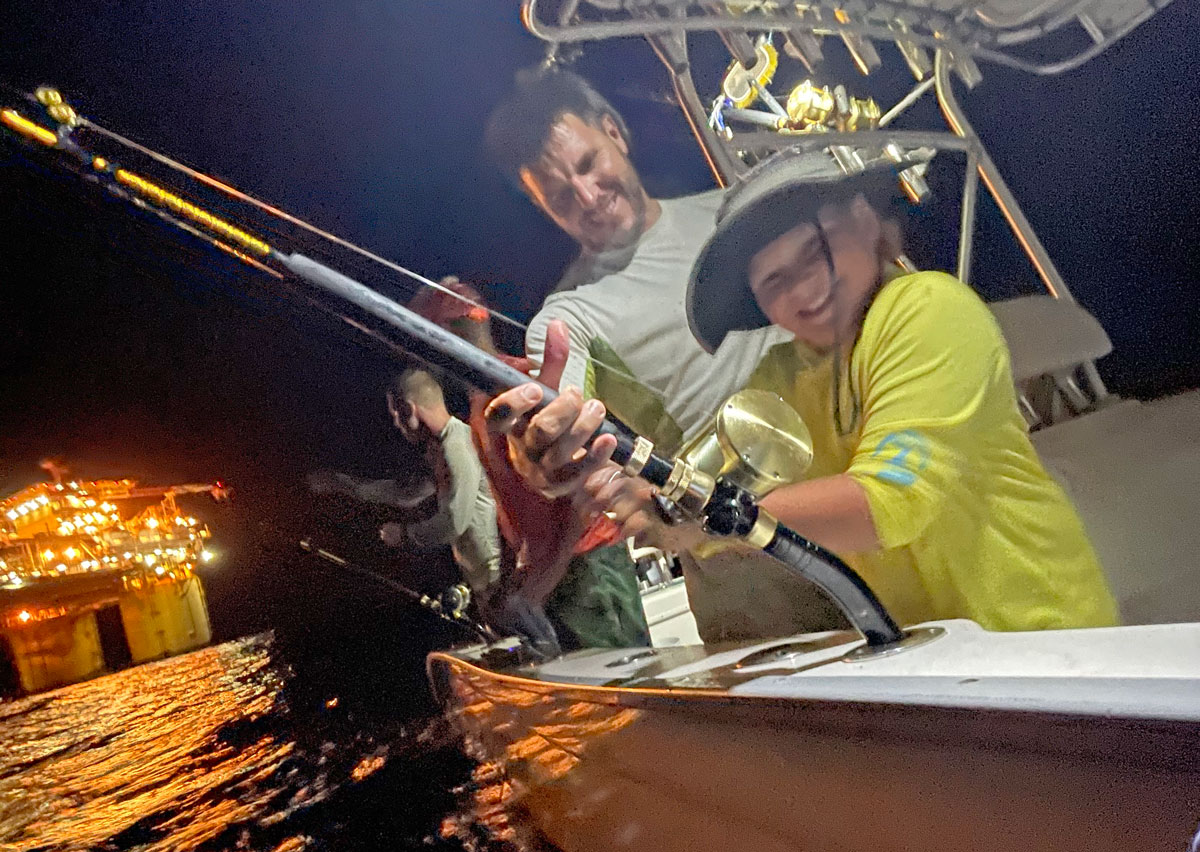 On the way back to port, Godley caught an 80.3-pound black grouper on a large chunk of cut squid.

“I wanted to catch another marbled grouper for the Louisiana (record-books),” Godley said, “so I grabbed a big, hand-crank rig that I’d set up for amberjack the day before. (It was a) Shimano Tiagra 50 sporting a 150-pound-test leader and the biggest hook on the boat,” Godley said. “(It was) much bigger than what we would normally use… but it was handy.”

Just after Godley hooked the fish, a barracuda tangled the fishermen’s lines. He was surprised that the fish was still on after the tangles were cleared.

“But I could tell that it was a really big fish,” Godley said. “When I managed to get it about halfway, it started digging hard back down to the bottom, taking all the line.”

Godley thought it was an amberjack because of the way the fish dove back down; once off the bottom, grouper bloat and float.

“When we got it close to the boat, we saw a big brown fish under the water,” Godley said. “But then it started floating, and we could see a lot of bubbles.

“We realized it was a gigantic grouper. We got the gaffs in it and looked at each other. We were confused about what kind of grouper it was; we’d never seen one that looked like it before.”

“Everybody yelled and screamed,” he said. “When we got it in the boat, we realized that we’d caught a pretty rare fish.” 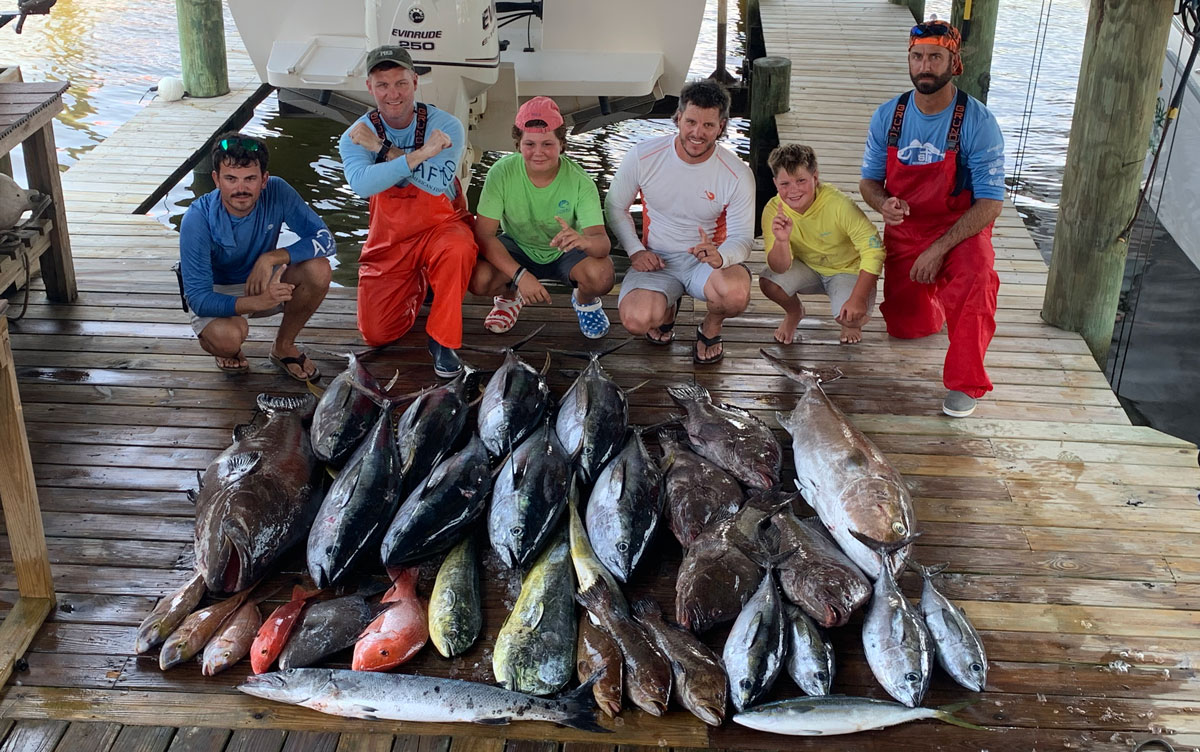 Godley said only three black grouper have been registered in Louisiana’s fishing record book, the biggest at 105 pounds and the next two around 50 pounds. Godley’s fish comes in at No. 2.

“Since we had no room left in the (ice) box, we headed back to Cypremort Point, cruising at 45 mph on calm seas,” Godley said.  “It ended up being a trip of a lifetime with a couple of amazing fish.”

Sign Up Now
About Will Martin 104 Articles
Will Martin is an adventure writer based in New Orleans, LA. He pens fiction and nonfiction stories at willmartin.info, and is a staff writer at Louisiana Sportsman. He can be reached at willm@lasmag.com.