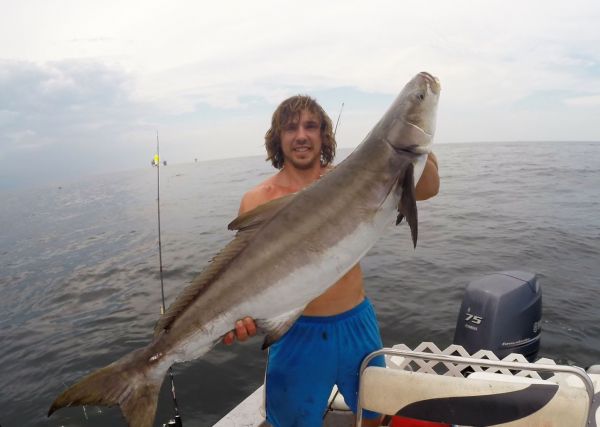 First snapper at a rig often brings lemonfish up with it, Chauvin says

Cobia are one of my favorite fish to catch, but with only a 16-foot bay boat, my days at trying to get these tasty fish are very limited.

So I make sure to have the most enticing bait that no cobia can resist: barb-less hardhead catfish.

This old trick that I learned growing up in Cocodrie has produced lemonfish while other boats are tossing out every lure in their box with no luck. But after a few seconds with an iridescent, croaking catfish swimming around, a lemonfish is usually on my line in no time — leaving nearby boaters scratching their heads.

Before I go out to the some of my favorite rigs 2 to 8 miles out of Fourchon, I make sure to stop at the first few shallow rigs out of Belle Pass. Using small hooks on the bottom stuffed with bait shrimp, I’ll quickly catch about a dozen small to medium (7- to 11-inch) hardheads. Then, I’ll remove their three stickers with pliers before putting them in the livewell.

Catfish are tough, and do very well in the livewell with other baitfish all day long.

Once I get to a rig in cobia waters, I stop the boat 100 yards out to prepare. Hook a catfish near the tail with a large circle hook tied onto some heavy line. I like directly spooling 100 yards of 60- to 80-pound Trilene Big Game mono with several hundred yards of 65-pound PowerPro backing. Nothing is worse than having that big cobia break you off in the rig, so I don’t play around with light line.

Always have another two lines rigged and ready to be fished with various-colored large bucktail jigs since the cobia often swim in groups. Or, another hardhead line can be rigged and ready to go dangling at the water’s surface with the rods in rod holders.

Test the current first. With low to moderate current, that catfish should have no problem swimming down in the water column where it will suspend. However, when the current is ripping, a few ounces of weight may be needed to get the catfish further beneath the surface. Don’t wait until the moment of truth to realize your catfish won’t make it deep enough due to the water conditions.

Make the approach then pull up a snapper. I’ll circle around the rig and see if any lemonfish come up. When that doesn’t work, I implement my favorite tactic, which I created myself — the red snapper pull-up.

Don’t tie up to the rig, because you’ll need a quick escape. Drop some dead bait to the bottom and hook a red snapper — it should only take a couple of minutes.

As always, crank fast at first to avoid getting popped in the rig, but once the snapper is half-way up, slow the ascent. When the snapper is finally just in view, stop and scan the waters for a few seconds.

Most of the time those curious lemonfish will be circling the snapper wondering what’s going on. That’s when I deploy my catfish to the same depth of the lemonfish, or start working my bucktail jigs.

The majority of my cobia are caught using this snapper tactic, but the first time is definitely the charm. Rarely do I see cobia on the second or third snapper that I pull in. Many people will miss out on seeing the lemonfish when cranking in another fish unless they are looking carefully, and cranking them up at a slow enough speed.

Once you hook one cobia, don’t boat him quickly or move away from the rig unless it is very big. Scan the water for other cobia swimming alongside the hooked one.

Never give up. If no cobia are at one spot, don’t waste time staying at that rig for an extended period.  I have more success bouncing from rig to rig quickly, and usually hook the majority of my lemonfish within the first 10 minutes of arriving at each rig.

Try the method yourself with two poles at once. Here’s the  story of this step in action when I was fishing alone in my small bay boat.

That battle had begun shortly after I got to the rig and did my usual initial circle. I didn’t even need to look into the water or catch a snapper because workers up on the rig were yelling that a big lemonfish was within view. Without ever seeing the fish, I dropped my hardhead in the water and started working a bucktail jig on another pole for several minutes.

I thought the fish must’ve left because I never saw it, but then a cobia smoked my bucktail and was taking me down.

I quickly realized it was probably a solid keeper, but instead of boating the fish, I kept playing it out around the rig hoping that the bigger one was still around. All of a sudden, a huge shadow started following my hooked lemonfish. With my free hand, I grabbed my hardhead pole to position it in front the shadow.

Seconds later, my catfish pole nearly got ripped out of my hand. The workers up on the rig were laughing at me for using two rods at once.

I instantly knew the second fish was a monster, and I was on the losing end of this arm wrestling battle.

I lost interest in the smaller cobia, and it took a hard run and got off the line without me controlling the drag, but that little fish was of no concern. I had to get the big one away from the rig — and quick.

I put the motor in reverse to back away from the rig, with wave after wave crashing over the motor well. Sinking the boat wasn’t my concern, but landing this beast of a fish was!

The water-filled boat started to self-drain and the battle ensued in open water on my front deck — with my ill-equipped $25 reel.

The fish made its first run to the boat, and the circle hook was just barely attached in the corner of its mouth. I knew a quick landing would be crucial to boat the fish.

I readied my gaff on my prototype boat pole, but the prototype that had worked flawlessly up until that point on many fish failed at a most unfortunate moment. The cheap clip holding the gaff came loose right before I could stick the beast, and my gaff attachment sank to the bottom of the Gulf as I sat there speechless.

Scoop after scoop, I came up empty — wondering if it was even possible to fit this big lunker in the net,  and how long that hook would stay in place. But somehow I got the fish’s head in the net and with a major effort, I tossed him from the water into my 16-foot boat.

Victory — or so I thought. Seconds later the fish started bucking violently, and nearly jumped out my low-sided boat. I dove on top of the cobia much like I would wrestle a gator to keep the hard-kicking beast aboard. Eventually, I was able to lift the massive fish that bottomed out my 50-pound scale and get it on ice.

Exciting battles against big fish are the reason I go rig fishing when conditions are calm and no rain is forecast. I have my CB radio, boat horn, flare gun, Spot Satellite Communicator and rare stern-mount system for my trolling motor with three batteries aboard to stay safe in case something unforeseen were to happen. I stay within sight of shore structures, so weather systems can’t pop up and surprise me.

Lemonfish will hit many different lures. I’ve caught them on bucktail jigs, rattle traps, braid runners and even holographic jigging spoons with steel leaders — but I’ve yet to see one come up to my de-barbed hardheads without taking a bite.

Even though I often find huge hardtails in the bellies of cobia I clean, I like to fish with a bait that is a tad different than what they are constantly seeing. Large 6- to 10-inch live croakers also make for great baits, as well.

For artificials, I use 4- to 6-ounce bucktail jigs when targeting cobia because the bluefish won’t attack larger jigs as readily. A smaller bucktail will get torn to pieces out there, and nothing is worse than seeing a big cobia approaching your lure only to have a small bluefish swim in front, bite it and then cut the line. Even when bluefish don’t cut the line, their sharp teeth will rip off all the hair on a bucktail jig within seconds.

I work jigs violently and extra hard to create a wildly erratic presentation that drive the fish crazy, and lightweight jigs are too slow for this method. Heavier bucktails will sink faster to get in the strike zone quicker before a sighted cobia leaves the area.

I don’t use attached plastic grubs because it slows down the presentation. Instead, I buy jigs with flashy strands or tie on some flashabou strands myself — they have more action than any attached plastic.

The best time to hit the nearshore rigs is in the mid-summer months when the cleaner water comes close, and brings the cobia with it. Try the snapper pull-up method, and use the barb-less hardhead trick to hopefully bottom out your scale, too.

Finally, put those tasty slabs on the grill, and enjoy!