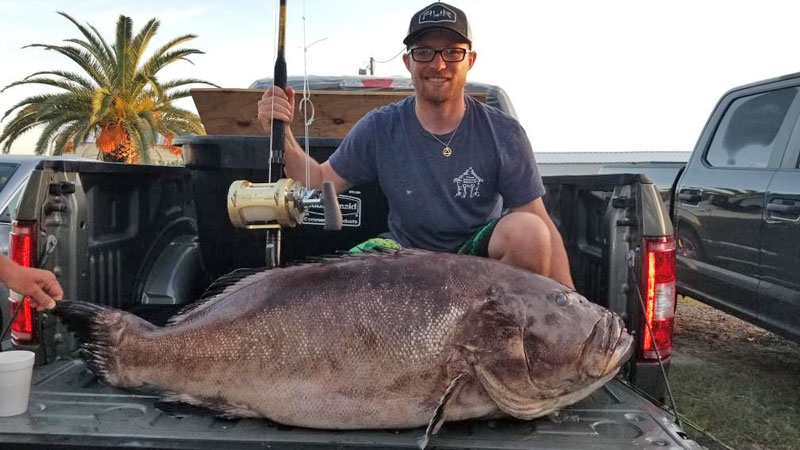 Cole Thurman’s first time fishing offshore in Louisiana was a trip he’ll never forget – his catch made him a state record holder.

With an official weight of 106.3 pounds, the black grouper Thurman hauled in was 56 inches long. The weight nearly doubled the previous state record.

“It surpassed the previous record by 51 pounds and was 18 shy of the world record,” said Thurman, from Marble Falls, Texas. “I didn’t expect that when I rolled out the driveway that morning. I was just excited to see my friends and go fishing…. I didn’t expect to set a new state record.”

The catch of a lifetime happened Sept. 3 when Thurman and some friends launched out of Port Fourchon with Down the Bayou Charters. Two boats were loaded down with anglers, with Thurman’s boat guided by Capt. Ian Buzbee.

“It was my first time to go offshore fishing in Louisiana,” Thurman said. “We were going out to fish some reefs about 90 miles offshore.”

Thurman said the boats stopped off at a few rigs about 20 miles out to catch the bait fish for the trip, and expectations were high.

“I couldn’t have asked for a more beautiful morning,” Thurman said. “We just wanted to catch a lot of fish. With Louisiana being like the fishing capital — a complete outdoorsman paradise — I was just excited to be out here on the water.”

After a morning of catching fish left and right, Thurman said Buzbee helped him get a Shimano Tiagra 50 reel with 300-pound monofilament and a custom, 5-foot-5 extra-heavy action rod situated with live bait and lots of sinkers.

It was set, and 30 minutes passed.

“All of a sudden, that rod just doubles over, and I knew right from the moment I set the hook it was something huge,” Thurman said, adding he initially suspected the catch was a shark or amberjack. “The fight for me felt like it was over in an instant.”

Buzbee said the catch came in the middle of the trip.

“We had just finished catching amberjack, and we were trying to catch some groupers a few miles away,” Buzbee said. “The fight took about 15 to 20 minutes. We were not confident …. we thought we were going to lose it.”

Thurman said during the fight, he had a rush of adrenaline, but he still almost gave the rod to someone else to finish the job until he looked down again.

“I looked back down, and I could see color,” he said. “About 15 feet from the boat it rolled over, and I knew it was a grouper because of the large mouth and huge paddletail. I finished the job, but after that, I was exhausted.”

As soon as the grouper was brought aboard the boat, Thurman said Buzbee radioed another captain and crew a few miles away and told them a state record had been broken.

“I obliterated the old (record),” Thurman said. “It was unreal. I was just blown into a state of disbelief for the remainder of the day.”

Joey Maciasz with Down the Bayou Charters said the catch was unique and rare.

“It’s definitely a fish of the year,” Maciasz said. “Anything that doubles the previous state record is damn cool.”

Thurman said the entire experience proved to be memorable, including the trip to the Louisiana Department of Wildlife and Fisheries office in Bourg to certify the catch.

“It’s truly a fishing story,” he said. “You would never believe it. In the back of my truck I have this fish in a hundred-gallon tub and it’s covered in cardboard. Well, someone pulled out in front of me, and I had to slam on my brakes and the fish took out my window — the back window of my brand-new F150.

“I’d break out 10 more back windows for a fish like that,” he said.