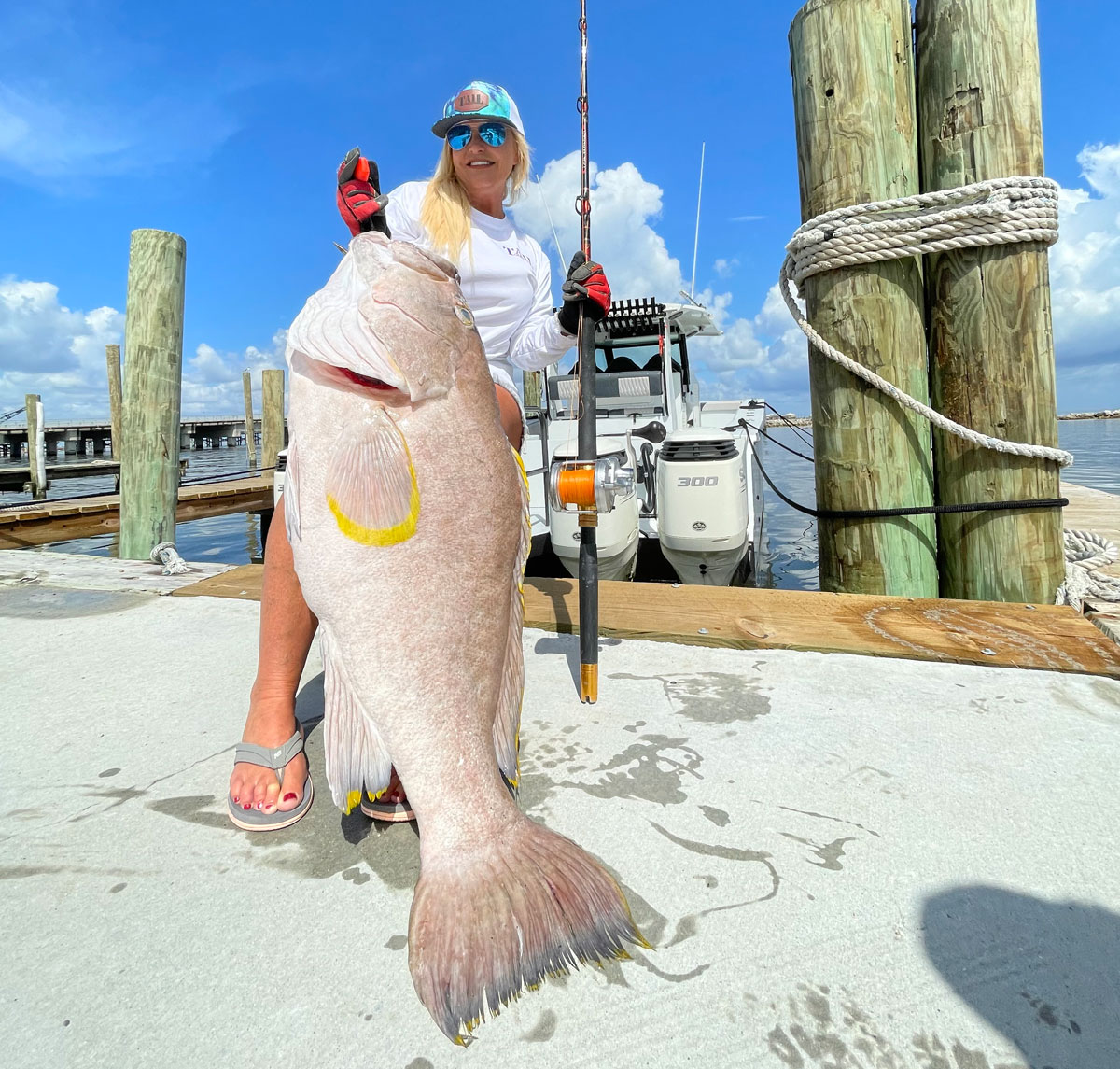 Sue Beiriger has traveled from her home in Ascension Parish to fish in places all around the world. She’s caught all kinds of big fish in her life fishing with her husband, Jared. She has been excited before, but never as much as on Saturday, July 16.

That’s when she hooked into the state record yellowedge grouper fishing about 50 miles out of Grand Isle. The big fish weighed 42.95 pounds and was just three pounds shy of the world record.

“I screamed. I jumped up and down. Tears were streaming down my face. I just couldn’t believe it,” she said, still on cloud nine a week after the catch. “I’ve got all kinds of big fish all over the place, but grouper is my thing. And to catch the state record. There’s a video of it all and it has more than 5,000 views on Facebook. I think the reaction was probably more exciting than the fish itself.”

Like many record catches, it was almost a record that wasn’t.

Drop a line out

She and Jared had headed their boat, the Double Down, out of Grand Isle and were taking the custom built 38-foot catamaran aluminum hull boat out looking for red snapper with her two grandchildren, Cannon and Ellie, and some friends. She had not even been fishing as they limited out on snapper fairly quickly and they headed back to an area to fish for grouper.

“I was just letting everybody else fish and we stopped in an area that was like a little canyon out from the rigs,” she said. “I decided to drop a line out and as it was sinking to the bottom, one of our friends caught an amberjack. Those fish fight all the way in like crazy and I didn’t want to do that. But then I got a fish on and I just knew it was an amberjack, too.

When they got the big fish in the boat, there was some speculation that it could be a state record, so they cut the rest of the trip short and headed to Bridgeside to weigh it. Jared texted ahead so they would have the scales ready.

“My favorite is grouper,” she said. “ That’s my dream fish. I’ve caught bigger fish of other species, but this was my dream fish, to catch the state record grouper.”

She also made sure the catch was preserved. Not only will she have a replica of the fish made to hang at the entrance of their camp in Grand Isle, she also had a fish stamp print made and is having a skull mount made as well. The fish will take the prime spot in the camp previously occupied by a huge Cubera snapper caught by Jared in Costa Rica. But he doesn’t care.

“I just love seeing her catch big fish,” he said.

She landed the fish using a pogie for bait on a Shimano Speedmaster reel and Acuma rod with 60 pound PowerPro braid. The old state record for yellowedge is 41.90 pounds caught by Dustin Mule off the West Delta Blocks in July of 2009. The world record was broken earlier this year with a 46 pound, two ounce fish caught off the Norfolk Canyon area of the Virginia coast.