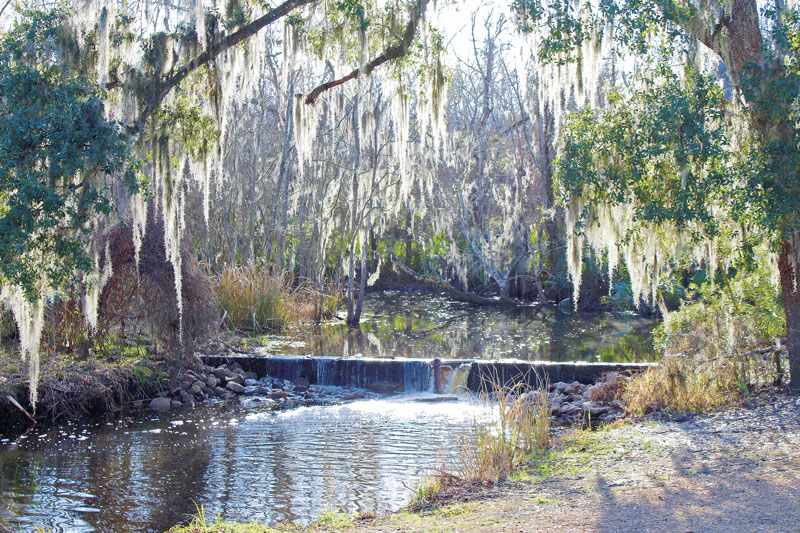 You often hear of them referred to as “Happy Places.” Places where people can go in their minds to a simpler life with no worries and no distractions. When you need refreshing, go to your Happy Place.

Fortunately here in Louisiana, we have places that actually exist where we can do that without a long trip or spending an armored car load of money. Palmetto Island State Park in Abbeville and Sam Houston Jones State Park outside of Lake Charles are two of those places. They feature just about any activity you’d like to pursue in the outdoors and there is no better time to visit than in the spring.

And like the popular old movie, a river runs through them both.

Located on the Vermilion River, Palmetto Island State Park offers a real south Louisiana outdoors experience. A boat launch provides access to the river for fishing and boating, while the interior lagoons allow canoe and kayak lovers an up-close look at the native plant and animal life.

The park covers 1,299 acres and, not surprisingly, is noted for its abundance of palmettos which form a dense understory in the coastal bottomland hardwood forest that predominates here. Palmetto Island State Park has a visitor’s center which houses a multi-purpose room that can be rented for meetings, weddings and other social events. A water playground is located nearby. Guests may stay at one of six two-bedroom cabins nestled in the woods or use any of the park’s 95 campsites. There are four picnic pavilions and strategically placed picnic sites for visitors. An aquatic pavilion overlooks the Vermilion River.

“Camping is the biggest draw to the park and we get a lot of repeat campers who are local to this area,” said park manager Marcelle Guidry. “The campground is full of trees and is shady. The natural plants give a separation between campsites. But there are a few areas where, if a group is camping together, they can get set up to be close together.

Guidry said the park gives an illusion of being far away from civilization deep in the south Louisiana swamp, but it’s just a few minutes to Abbeville in case campers need something. Fishing in the river is also an attraction and there are ponds and a canoe trail as well.

“It’s beautiful here all the time, but especially in the spring,” she said. “It’s still kind of cool and the greenery is already lush.”

One attraction that the whole family can enjoy and learn from is the visitor center complex. It will definitely be a “must do” for the day-use visitor, with a water playground and bathhouse. The ever-present palmetto plants are echoed in many of the architectural elements around the park.

Palmetto Island State Park is a recent addition to the Louisiana State Park system. The new state park is located south of Abbeville, Louisiana in Vermilion Parish. The state of Louisiana acquired the property for the park in 1981 but did not begin construction on it with the intent of public use until 2002. State budget constraints and other concerns delayed the park’s opening until October 28, 2010.

Unfortunately, this park suffered severe damage during Hurricane Ida and was already in need of repairs and had to be closed. But the good news is, the park is scheduled to reopen this month. Before you plan a trip, check to make sure. And the really good news is that even though the park is isolated, everything will be like new.

“The entire campground area has been updated and improved with camper spots extended and widened,” said Park Manager Tracie Ramey. “We’ve got 10 brand new riverfront cabins with screened in porches that also include TV and fireplaces.”

Fishing is also fine here in the spring. Two boat launches are conveniently located on the West Fork of the Calcasieu River, providing access to Calcasieu Lake, about 20 miles away.

“You can put in right on the Calcasieu River and head out into the lake or even run all the way to the Gulf if you have a mind too,” she said. “We have a mix of freshwater fish and on further south as the water gets more brackish, there’s a mix of some saltwater species, too.”

Sam Houston Jones State Park was given its current name in honor of the state’s 46th governor, Sam Houston Jones, who was instrumental in setting aside this tract of land for the public to enjoy for both day-use and overnight visitors. The caretakers of this 1,087-acre park have worked to keep the land in its natural state, abundant wildlife inhabits the area. Tree-filled lagoons and a mixed pine and hardwood forest combine to create a unique natural environment. The park is located just north of the most productive birding region of Louisiana. The bird watching is always excellent, but at certain times of year, nearly 200 species of birds can be seen at or within 30 miles of the site.

Sam Houston Jones State Park is home to more than 70 acres of longleaf pines, the oldest living southern pine species. They were once one of the most abundant tree species in the United States, stretching across 90 million acres from Virginia to Texas. Over time, land-use practices such as logging, farming, development, urban encroachment, and fire exclusion have diminished the longleaf pine, leaving less than 4 million acres of longleaf forest and less than 10 percent of their original presence in Louisiana.

The three hiking trails winding through this beautiful park make strolling or serious hiking, pleasurable. Particularly interesting is the old stagecoach road, which hikers may travel to explore the park and the banks of the various tributaries to the Calcasieu River.

Summer is here and you can partake in the fishing and camping at two facilities, Jimmie Davis State Park and Chicot State Park. […]