The Asian swamp eel, an invasive species, has been found in Bayou St. John in New Orleans. LDWF sampling over the past several days have found the eel, native to Asia, in several locations.

The impact of the Asian swamp eel on native species is unknown. Its diet consists of fish, shrimp, crawfish, frogs and other aquatic invertebrates, such as worms and insects.

In its native habitat, the Asian swamp eel is routinely found in shallow waterbodies and burrows into the shoreline for nesting areas and protection from predators. It primarily lives in freshwater; however, it can tolerate brackish water for short periods. 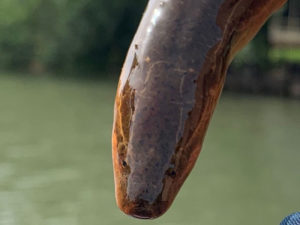 “If this species becomes established in Louisiana it could be the first population in the United States. Its impact to our native fish is unknown and something we will study. We are always concerned when we find potentially invasive, non-native species in the state,” said LDWF Aquatic Nuisance Species Coordinator Robert Bourgeois.

These eels are common food in many parts of Asia. How the eels found their way into Louisiana waterways is unknown. However, the most likely case is through an accidental release or the release of pets from an aquarium. Possession of live Asian swamp eels is prohibited under state law, and it is illegal to release a live Asian swamp eel into state waterways. 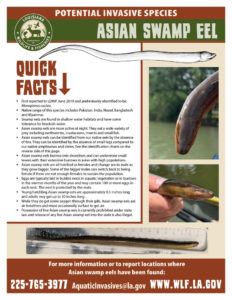 LDWF is investigating how the eels were released into Bayou St. John.

Over the years, similar Asian swamp eel species have been found in New Jersey, Hawaii, Georgia and Florida.

Asian swamp eels are different from native eels by the lack of any fin structures. It is also different from aquatic species, such as sirens or amphibians, as they lack tiny legs. 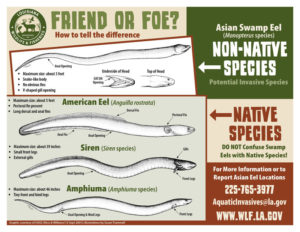 LDWF is sampling surrounding waterbodies to determine how widespread the eels have spread. The department is asking the public to help determine the range of the non-native invasive by immediately placing any specimens collected in a plastic bag and placing it in a freezer. Please contact the department to arrange for pickup.

LDWF will be developing a plan to protect the state’s aquatic resources from this non-native and invasive species.

Youth squirrel season on select LDWF WMAs will be Sept. 26-27 and not Sept. 28-29 as was incorrectly published in the hunting pamphlet. […]

LDWF Secretary Jack Montoucet signed a declaration of emergency to re-open the recreational red snapper season for one final weekend. […]