Reaching the northeastern stretches of the Biloxi Marsh requires long hauls from Louisiana ports, but it’s less than 12 miles from Pass Christian. Here’s how to catch limits without burning a lot of fuel.

I arrived at the small-boat harbor in Pass Christian, Miss., 15 minutes before our 2 p.m. appointment — as storms just to the north of the coast broke loose.

So the next hour or so was spent visiting with Capt. Ronnie Daniels and the father-and-son fishing team of Dana and David Sanders while the rains passed.

When we finally left port, Daniels pointed the bow of his bay boat south and made the 11 1/2-mile trip to the first available spit of Louisiana land.

When he pulled off plane, we were just off Isle au Pitre, the northeastern-most tip of the Biloxi Marsh.

And the surface of the beautifully clear water was alive with rain minnows flipping and fish blowing.

While Daniels, Dana Sanders and I fiddle-farted around getting our gear ready, 17-year-old David Sanders was already on the bow sending a Matrix Shad into the fray.

On that very first cast, he set the hook and dragged the first trout of the trip into the boat.

But as he unhooked the schoolie and tossed it overboard, we older and slower anglers got into gear and put lures in the water.

Clouds of bait were creating nervous ripples as predatory fish swept through their schools.

And that’s why Daniels, owner of Fisher-Man Guide Service, makes the short jaunt into Louisiana — the waters are teeming with life.

The tide on this day wasn’t much, but you wouldn’t know it by the conditions we found: A text-book tide line was formed up, flowing around the eastern tip of Isle au Pitre, with storm minnows being swept along the clear side of the current break.

Daniels said that sets up the perfect situation for anglers.

“(Trout) are going to be along this tide line on one side or the other,” Daniels explained. “They can sit in that muddy water and run out into the clear water to ambush bait.

“At some point, they will be feeding here.”

Seventeen-year-old David Sanders, who builds custom jigs and sells them under the name David’s Custom Tackle, seemed intent on proving 1) that trout were there and 2) that he was the best angler on the boat.

He did so by reeling in nice trout while Daniels and I played with ladyfish, while the elder Sanders hung around on the back of the boat making some casts but pretty much enjoying the scene of his son spanking us.

Of course, it was hard for me to keep up because I had to put down my rod to take photos when he landed a solid keeper. I mean, I was there to work.

Not sure what excuse Daniels could fall back on.

To his credit, David didn’t rub it in. Too much.

But with all of that, by the time we were chased back across the Mississippi Sound by a massive lightning storm, I was already thinking about how to get back out to this part of Louisiana few of us ever consider fishing.

Daniels said he sees a Louisiana boat here and there, but for the most part this secton of the Biloxi Marsh is only fished by Magnolia State anglers.

Of course, since it’s the first land anglers see after crossing the border, Isle au Pitre acts as a magnet, attracting a lot of attention.

That can lead to frustration, as boats crowd around the relatively small island. The virtue of patience can truly be tested, especially on the weekends.

So when there are a number of boats surrounding the island — or if he’s working the area and crowds build — Daniels simply moves farther into the Biloxi Marsh to find waters free of the pressure and frustrations.

Normally, Daniels sticks to areas from Door Point north, but runs to areas familiar to most Hopedale anglers are not unreasonable.

Between Isle au Pitre and Bay Eloi lie a lot of marsh islands, with many associated reefs and bays. So there’s no shortage of targets, even in the height of summer.

When he’s working Isle au Pitre and islands on the eastern edge of the marsh, the guide said it’s important to use the tidal flow to determine where to set up.

“On an incoming tide, we’ll fish the north side (of an island) because the fish are waiting for shrimp to be swept around the islands,” Daniels said. “On an outgoing tide, there will be a big, looping tide line around the points, and the fish will be on that side of the island.

“They’re just sitting there waiting on all those shrimp to come across that point.”

But by August catching trout in the shallow flats off these islands becomes an early morning and late-afternoon game.

“When that water temperature gets up, they’re conserving their energy and hunker down,” Daniels explained. “You get an early morning bite and a late-evening bite, but during the middle of the day they’re not feeding.

“They’re there; they just aren’t feeding.” 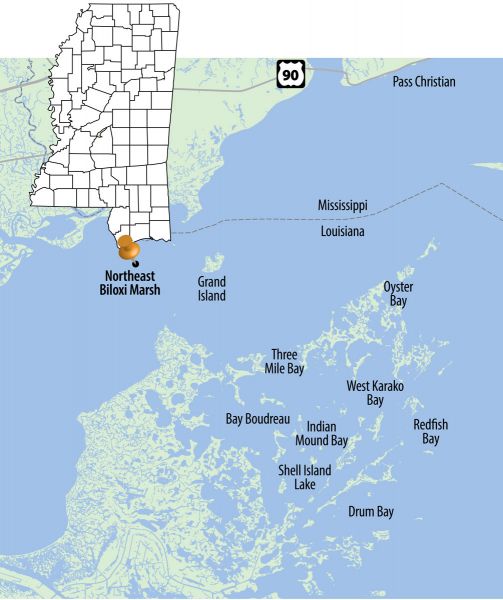 So after picking off fish early along the islands, Daniels will head to deeper water if he needs to round out limits.

He then focuses his efforts on two kinds of structures: oyster reefs and shallow-water rigs.

There are three keys that have to be considered when looking for just the right place to begin:

“Any time you can find clear water pushed up against muddy water that’s a good ambush point,” Daniels said, using the conditions on this day at Isle au Pitre as an example. “We know there are shrimp and rain minnows here because we see them flipping, and we have tidal movement.

“There’s going to be some good fish feeding here at some point today.”

He normally puts up his artificials when he’s searching midday bites.

While croakers are part of the early summer arsenal, he said shrimp become more important during the when the broiler of summer heat really kicks in.

“In August, we’re not using croakers as much any more,” Daniels said. “They get too big, and the trout just seem of turn off of them.”

While Carolina rigs are the norm for croakers, when he turns to shrimp Daniels other means of delivery.

“If I’m throwing shrimp, a lot of times it’s drop-shotting,” he said.

The entire Biloxi Marsh is located in Louisiana, but what if you decide to launch in Mississippi? Do you have to abide by the 15-fish daily creel because you’ll cross Mississippi waters on the way in?

“Recreational fishermen not fishing in Mississippi waters may transport and land fish that meet the minimum size and creel limits of the waters in which they were legally caught,” the regulations read.

So you can legally catch and keep the Louisiana-allowed 25-trout creel per man, as long as you only fish in Louisiana waters.

And you don’t even have to purchase a Mississippi fishing license to catch them.

“Said recreational fishermen must possess a valid saltwater sportfishing license as may be required in the waters where the fish were caught,” the Mississippi Department of Marine Resources regs stipulate.

And if you want to just hire one of the guides who fish out of the Pass Christian Small Boat Harbor, you also are good to go.

“You can keep Louisiana limits, as long as I don’t stop on the way in,” Capt. Ronnie Daniels said.

How to learn new fishing areas

An intimate knowledge of a specific area can produce quick limits of fish, Capt. Ronnie Daniels said. He simply knows where he should go given the specific conditions on a given day.

Building such a library of information took time, and that’s something Daniels said many anglers seem unwilling to invest.

“A lot of guys try to learn too much too fast,” he said.

That leads to a lot of running around — especially in places like the Biloxi Marsh, where there are many options — with the result that little information is gleaned about any particular spot.

“They spend so much time running around trying to learn everything that they never learn there’s a shell reef that comes off that point and the tide sweeps around it on an outgoing tide,” Daniels said.

What anglers should do instead is to focus, the captain said.

That way, you’ll know where fish concentrate and how to pick them off when you arrive.

Once you know that smaller area very well, then you can widen your search and add to your library of knowledge, Daniels said.

Capt. Ronnie Daniels said effectively working a flat extending off a spit of marsh is about knowing how trout relate to the underwater structure. 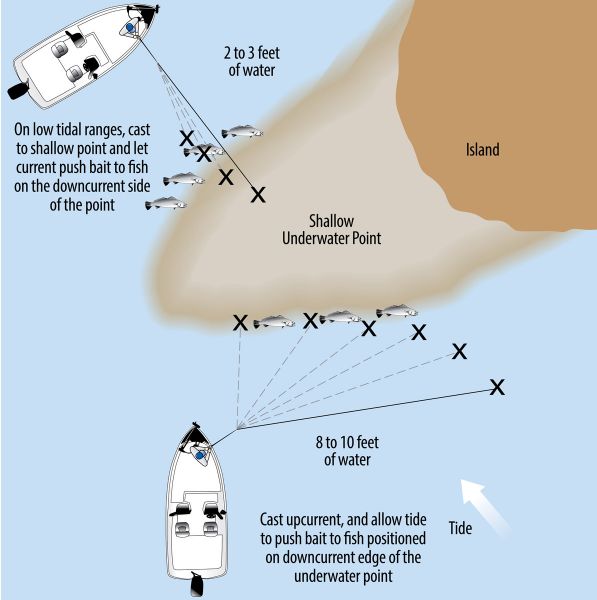 “I find that a lot of times they’ll be on the up current side,” Daniels said. “They can just group up in the eddy and eat, and not have to work so hard.”

He said often these flats will have a ledge on one side and taper off on the other side, and it’s that drop-off that sets up a the eddies that allow fish to conserve their energy.

That’s not to say some fish won’t be on the down current side of a flat — but they will only be there when the current is fairly slow because there is no eddy.

In either situation, the guide uses the current to position his bait properly. That means he will cast up current and let the tide drag his lure to the fish.

David Flores, 6, hooked his first speckled trout on his first fishing trip in Lake Borgne back in October 2022. […]