The water is getting cooler, and large trout are moving from Timbalier Bay and Caillou Island inland towards places like Catfish Lake and Bay Courant, according to Capt. Roger Dowdy with Reel Cajun Adventures.

According to Dowdy, one of the founders of Four Horsemen Tackle — which manufactures the Four Horseman Cork that anglers along the Gulf Coast use — the real trick is getting into the canals and ditches draining from the open-water areas and getting on the current lines with a minnow or a Matrix Shad tight-lined or under a Four Horseman Cork.

“In Catfish Lake, you have to find those trash shell beds and trash piles,” Dowdy said. “Just sit on those trash piles under a cork or just tight-line with a fluorocarbon leader to a 1/4-ounce jighead with a Matrix shrimp cocktail or green hornet. Green hornet is probably my favorite color.” 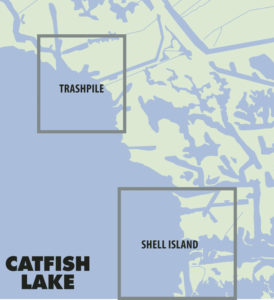 Speckled trout will be coming out of the bays and spreading out across the marsh. They haven’t gotten into the deeper holes yet, so anglers can find trout all over the place, according to Dowdy.

“It’s really a good time to fish right now, because the trout are spread out,” he said. “You can catch a limit of trout on a random point in the middle of the marsh this time of the year.”

Why these spots are hot 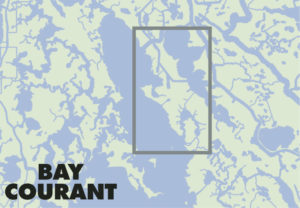 Most of the fish in Catfish Lake will mostly be on the east side of the lake, according to Dowdy. When anglers enter Catfish Lake, there’s a small shell island and some trash structure; on the northeast side is another trash pile that people fish as well. A lot of trout will be in the marsh around the east side of Catfish Lake.

Bay Courant and all of the canals leading into the bay from the east and north are good to fish as well, according to Dowdy.

“It’s going to get better as it gets colder until we get to January. It gets a little unusual but there’s still some good fishing out there,” he said.