Up well before dawn on a chilly January morning, Tommy Vidrine looked more like he was dressed to target specklebelly geese— not speckled trout.

But he definitely wasn’t headed to a rice field in Southwest Louisiana with a shotgun.

Nope, he was leaving Grand Isle in the early-morning darkness dressed in waders, a camo multi-layer duck hunting jacket and a knit cap — armed only with a couple of fishing rods, a handful of his favorite artificial lures and his trusty roadside 5-gallon bucket.

Speckled trout stacked in deep water along Louisiana Highway 1 in spots like the Forbidden Hole and the Snake Pit were what he was after.

And Vidrine, 55, who splits time between his home in Baton Rouge and his new camp in Queen Bess Bay on Grand Isle, is a trout-fishing fanatic no matter the time of year. Whether he’s yanking 6-pounders from the Caminada Pass jetties in the spring, fishing the surf at Elmer’s Island during the summer or hitting the Fourchon barges in the fall, Vidrine never stops pursuing trout.

So brisk winds from the northeast and temps in the upper-40s that morning were ideal conditions for him to launch long casts to fish positioned in the deeper, slightly warmer water on the south side of the highway.

The colder the better

For Vidrine, the colder the weather is over consecutive days in the winter, the better the trout fishing along Highway 1.

“These holes on the side of the road are like a sanctuary for trout,” he said. “If it gets real warm and the bait goes out, they’ll follow the bait. But when it gets real cold, the bait comes in and the trout stay in there, and when we fish with our swimbaits or twitchbaits or topwaters or whatever we try to entice them with, they’re going to eat. They’ve got to eat.”

Much of the marsh might be only 2 to 3 feet in most spots, but Vidrine said some holes are probably 15 feet deep along the highway, making them attractive to fish seeking out slightly warmer water.

“If it gets too warm, you have to move to the small bridges you cross as you head onto Grand Isle,” he said. “The trout are going to get out of those holes and get in the marsh and get where that current will bring them bait.

“If it’s not too cold and the water is comfortable, they’ll stay there instead of having to go in the pits to chase bait.”

Over the course of a chilly morning, we put more than 30 fish in the bucket by about 9:30, and had released at least 20 more smaller specks that had started biting as the day wore on.

As always, Vidrine was open to sharing his methods and tactics to help everyone enjoy the “park and fish” bite.

“If you’re going to fish the side of the road, you better find the best reel and rod for you to be able to throw far out, because only 20 or 30 yards is probably not going to give you much production. For most people, that probably means going to a spinning reel,” Vidrine said. “I see people doing that all the time — I’m out there throwing 40 or 50 yards, and I’m catching and they’re not. You really have to get it out there.”

“Out there, the most popular bait is probably your favorite swimbait, whether it be a Tsunami or a LiveTarget — a lot of them will work,” he said. “In January, you need a swimbait that looks like a mullet. All that’s left in there for them to eat — and they’re eating them — is finger mullet. So if you imitate the finger mullet, that would be the way to go.” 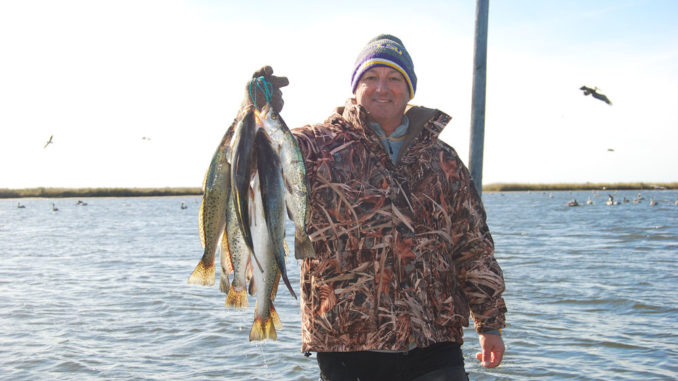 And Vidrine, who uses 12-pound mono line in the wintertime, advised not to forget about topwaters, either.

“You can’t do it on a sunny bright day in most cases, but when it’s cloudy or overcast where you can work the bait — I’ve caught some of my biggest roadside trout on topwaters,” he said. “Bring your favorite one, as long as it walks the dog. It can be pink or chartreuse — I don’t think the color matters. I think it’s the movement in the water. And topwaters equal big fish.”

A slow-sinking, suspending twitchbait is also one of Vidrine’s go-to roadside lures. When we fished, he was using a 3 ½ long chartreuse Yo-Zuri twitchbait with a 3D prism finish.

“You have to let it sink. Lots of people start twitching it back right away, but you need to let it sink for 10 or 15 seconds so you know it’s close to the bottom,” he said. “And when it’s really cold, you want slow twitches, nothing big or real fast. When the water is 35 degrees, they’re blood is close to 35. Remember, they’re moving slow right now.”

Typically in colder weather, Vidrine said the trout are suspended about 2 feet off the bottom down in the pits. He favors suspending baits with only two treble hooks, believing ones with three sink too fast and dive to the bottom where redfish are lurking.

“Remember, they still have to eat, regardless of the weather. You just have to be in the right spot at the right time with the right bait when they’re eating,” he said. “If you are, then you’re going to be successful.”

One of the biggest mistakes Vidrine sees other roadside anglers making is retrieving their lures too fast.

“Fish can’t physically move that fast because of the cold,” he said. “You have to move it fast enough to make it look alive, but slow enough for them to be able to catch it. Just imagine what that artificial bait looks like to the fish — a swimbait, a topwater or a twitchbait. You have to continuously move it, because if it stops, it’s useless because they’ll see it’s fake.

“But if you move it too fast, they can’t catch up to it because they’re too cold. So it’s got to be just right — and when you find out that pace, you can become very successful.”

This winter Vidrine’s favorite swimbait is Overcast Lures’ Swim Shad, in both salt and peppa and marsh bass colors, rigged on an 1/8-ounce jighead. He typically goes with a steady “lift and drop” retrieve.

“And they usually catch it on the drop,” he said. “Sometimes they want it faster and sometimes they just want a straight retrieve. Try different ways until it works, then duplicate it again.”

And when you do get a bite, you might have to wait to set the hook, he said.

“That’s hard stuff to do for most anglers – when they feel pressure, they want to pull,” Vidrine said. “But in the winter, when it’s cold, you have to wait. Those trout are lethargic because of the cold water, and might not have the whole bait in their mouth.

“Sometimes you have to wait three, four or five seconds to set the hook in the winter. It’s crazy.”

“A big key to being successful is being able to walk out in the water,” Vidrine said. “Sometimes they’re close early in the morning, but after the sun comes up, you have to get in that deeper water to catch them.”

Hip boots are OK, but you might end up cold and wet if you accidentally step into a hole.

“The waders are the most safe, and the neoprene helps keep you warm,” Vidrine said. “Waders give you some extra casting distance. They also get you away from the rocks and the bushes in the Snake Pit — it gets you away from all the obstructions.

“With waders, you can step out a little bit and really swing it hard to get your bait out there. Remember with those longer casts that you have to wait longer for your lure to go down. But your chances go way up on getting hit on the retrieve.”

In addition to waders, make sure you’re bundled up to withstand the chilly temps and potentially a brisk north wind.

“Roadside fishing ain’t for the faint of heart,” Vidrine said. “If you don’t like cold weather, it’s probably not for you. You have to dress like you’re going duck hunting. It’s usually cold and the north wind kicks you, so you need a nice thick hat over your ears, a good jacket and some warm socks.

“If you’re cold-natured, you might be better off waiting for the spring or summer.”

When selecting a roadside fishing spot right now, a couple of keys to look for are the presence of baitfish and cormorants, Vidrine said.

“Look and see if there are mullet flipping, and most of the time you’ll see cormorants diving down,” he said. “If the bait is in there, the cormorants are in they’re diving and eating.

“When you see that, the bait is there, and if the bait’s there, trout or redfish will be in there, too.”

Be aware, however, that some areas are private property along Highway 1, even if there are no signs. If redfish are what you’re after, you have lots of options.

“Most of it is public, but there are a few places where they might kick you off,” Vidrine said. “But the bridges all the way from Grand Isle to Fourchon are good for redfish. You can put some dead shrimp on a jighead and throw it on the bottom and catch redfish almost all the time, anywhere.”

And just like he recommends at the height of the summer trout bite, Vidrine said to be prepared to stay mobile to catch more fish in the winter.

“In the wintertime, you’ve got to stick and move,” he said. “It’s just like when you’re in your boat, but now you’re in a car. Park and fish, try a little bit and then move to another spot.

“Once you do it a lot, over the years, you learn the spots so you can move with the conditions.”

And remember, either side of the road can hold abundant fish, he said.

At Bayou Segnette and Grand Isle state parks, fishermen can stay next to some of the best fishing in the world and enjoy boating. […]