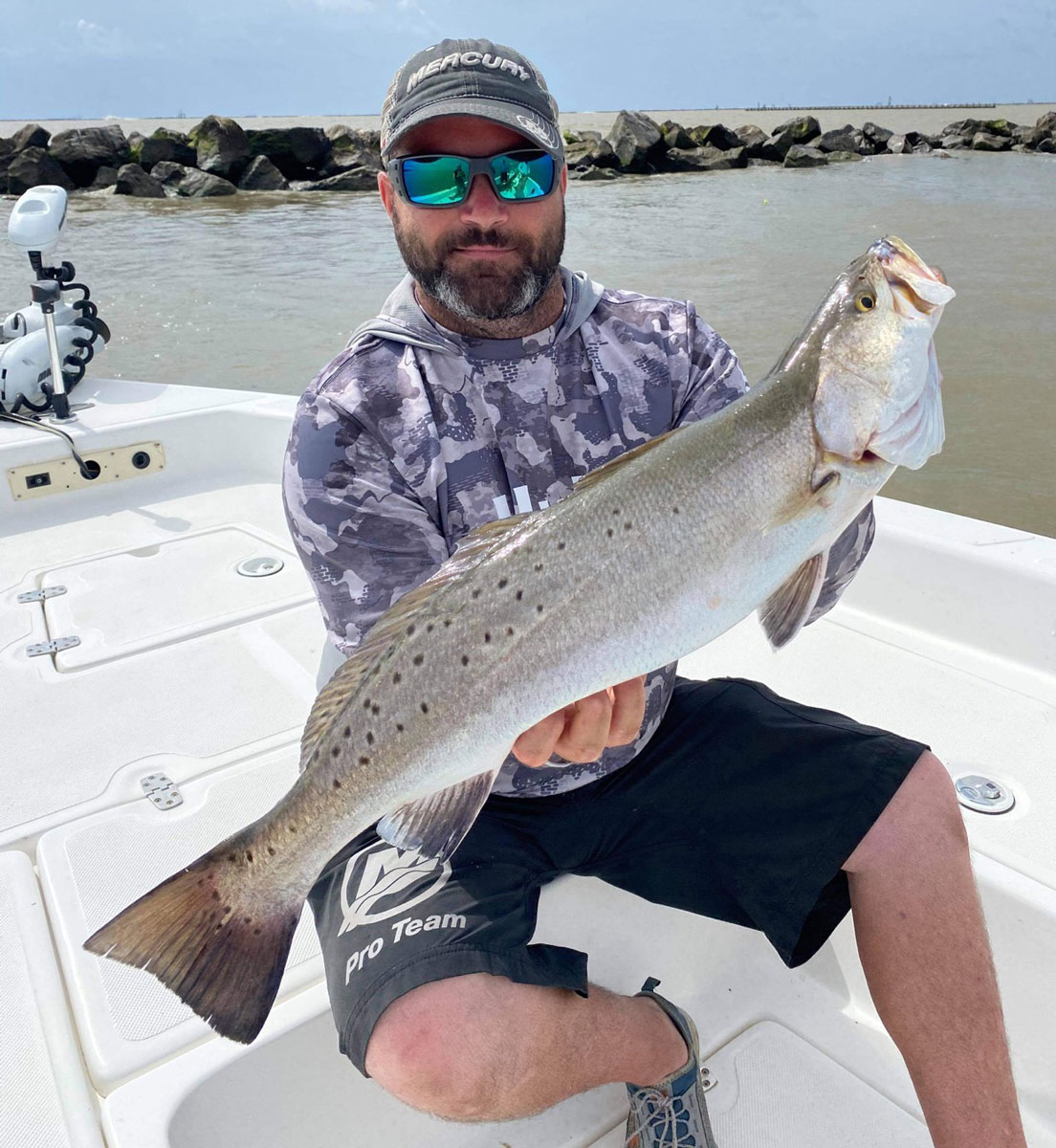 Paul Fuselier of Covington caught a 27 1/4-inch speckled trout while fishing near Venice on Monday, May 17. The fish weighed nearly 7 pounds, a giant given the size trout caught in south Louisiana the past few years. Unfortunately, weather conditions were too rough for a more accurate determination of its weight. Here’s the story:

The fishing trip was a bachelor party excursion in honor of Fuselier, a 38-year-old employee of Coca Cola Bottling Company. Fuselier had a friend and two family members with him, doing their best not to fall overboard. The motor whined as their guide, Capt. Jack Marino with Jack’d Up Charters (504-214-2946), made for calmer water.

“We went out, and the wind was blowing 25 mph,” Fuselier said. “We thought the wind had killed the trout fishing, so we switched to redfish.”

They caught three or four redfish and a big drum, but it wasn’t easy.

“We were struggling,” Fuselier said.

It was the sort of move bass fishermen routinely make. Marino maneuvered the boat behind some rocks — a tricky thing to do in rough seas — and into a very narrow windbreak. He’d gotten the wind direction spot on, and they were somewhat sheltered.

On the Gulf side of the rocks, 8- to 10-foot seas were cresting. Fuselier and his companions were on the leading edge of a storm system that would cause extensive flooding in Prairieville and other nearby towns by mid-week.

They had caught 3 redfish in the 30-inch to 32-inch range, when the wind shifted. After each cast, the wind would immediately move their corks away from the rocks. The solution was to remove the corks and fish on the bottom, and three of the fishermen started to re-rig.

But not Fuselier; he left his rig alone, having a hunch, a feeling in his gut that told him to keep using the Four Horsemen cork. He threaded on the largest shrimp in the livewell.

Fishing with a Daiwa Procyon combo spooled with 30-pound braid, he heaved the cork and shrimp.

“I threw my bait as close to the rocks as I could get it,” Fuselier said, “and as soon as the cork touched the water, it disappeared.

“I was thinking, ‘Here’s another one of those big, giant redfish,’” Fuselier said, “so I set the hook hard and reeled with my rod all down and crazy.

“When I got the fish to the side of the boat, and everybody saw what it was, they couldn’t believe it.”

As the excitement died down, everyone got to work. There was a scramble for the net, but the fish was scooped into the boat without incident.

“But as soon as she hit the deck, the hook popped out,” Fuselier said. “I mean, I had her by the skin.”

Because of rough water and a questionable set of scales, Fuselier was hesitant to judge the fish’s weight without a serious caveat.

“(The reading) bounced to 7 pounds, and I know that it weighed slightly more than 6.5 pounds,” Fuselier said. “I feel comfortable saying that the fish was 27 1/4 inches in length, and somewhere between 6 1/2 and 7 pounds.”