Some anglers cast with one hand; I almost always cast with two, particularly when I’m trying to sling a hard-plastic lure as far from the boat as possible.

So, with my right hand gripping the rod near the reel, my left hand took its position near the butt. Working in opposite motions, they sent the SB-57 crankbait on a long journey to the other side of the marsh pond I was fishing.

The lure landed with a small splash, and I engaged the reel to begin rhythmic cranks and twitches.

Those twitches are essential, but the fish almost never hit on them. Rather, they wait until the pause that follows and usually hit with such fury, the rod is in danger of being extricated from your grip.

That’s what happened here. A 3-pound speckled trout, the largest I’d encountered in a few weeks, slammed the SB-57 and rose to the surface to protest being fooled after I set the hook.

It was a valiant — if fruitless — attempt to earn its freedom, and after a sporty fight, the fish succumbed to a rubber-coated landing net. Normally I release 3-pound trout, but this one’s destiny was to star in a Marsh Man Masson video showing how to prepare whole, boneless stuffed speckled trout, a dish that tastes even better than it sounds.

That the crankbait produced the largest speckled trout of the day wasn’t the least bit surprising. For whatever reason, hard-plastics tend to deliver bigger specks than soft-plastics on average, and that’s particularly true in June.

It’s a great time to target big sows who still carry plenty of weight from their spring gorge and haven’t yet fallen into the summer doldrums, when the water becomes just too warm for them to feed frequently during daytime hours.

As a general rule, topwaters like Matrix Mullets or MirrOlure She Dogs thrown onto beaches or over coastal grass flats during rising tides are most productive first thing in the morning. Surf-holding fish will be between the first trough and the sand, so literally, the best casts are those that plop down on terra firma. 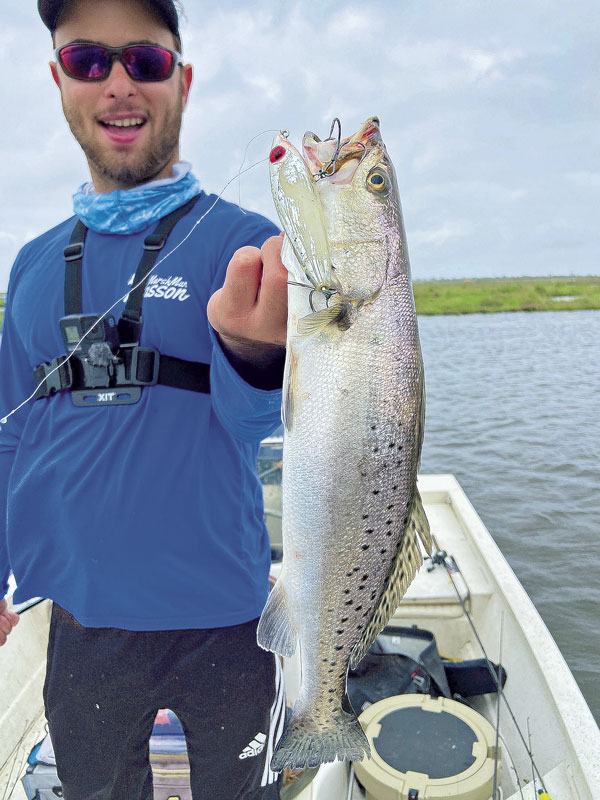 The action during the first 30 minutes of daylight can be epic, and often, that’s when the biggest fish of the day hit.

That changes, though, as soon as the sun peeks over the horizon. The fish tend to pull back and become more suspicious of topwater plugs. That’s when twitchbaits, like MirrOdines, SoftDines and Paul Browns, or crankbaits, like the aforementioned SB-57, become irresistible.

Each of these types of lures has its place, with twitchbaits producing well when winds are light and crankbaits shining in moderate breezes. It’s challenging to work a twitchbait effectively when winds push the line and keep the lure in perpetual motion. Remember, it’s those pauses that drive the fish crazy.

As far as colors go, I like bone topwaters in the early morning when the sky is still waking up and darker colors when clouds make it opaque. For subsurface plugs, I’ve been having great success this year with an assortment of reds, particularly the SB-57 in Rayburn red craw

What could a speckled trout possibly be feeding on that’s red? Nothing I can think of, but I know it works.

When I fished with Capt. C.A. Richardson in Florida back in April, he caught a number of fish on a MirrOlure with a red head and mustard body. He said most Floridians feel every detail of a lure must look exactly like the prey the fish are feeding on, but Richardson likes colors with contrast that get the attention of the fish.

It’s just confirmation that “matching the hatch” isn’t nearly as important as getting noticed.