In south Louisiana, the speckled trout is widely revered as the most sought-after inshore gamefish, and a really big speckled trout is the pinnacle of inshore angling for many anglers. Each spring speckled trout migrate to the barrier islands and beaches along the coastline to feast on the massive schools of baitfish gathering there at the same time. Savvy anglers follow them to the surf. Here are ten tips to help you target speckled trout, especially larger ones, in the surf.

1. Pay attention to the weather

Perhaps no other factor is more important to the success of a surf-fishing trip than the weather. The Gulf of Mexico is a large body of water, and it can easily become so rough that it is unfishable. Fortunately, these days it is easy to check both the marine forecast and real-time buoy reports online. I generally look for seas of less than 3 feet, with a 6-second or longer interval (the timing between the waves) and winds of 10 knots or less. Light, southeasterly winds are ideal because they usually push clean water in towards the beach, as well as baitfish. West winds are usually the kiss of death and should be avoided at all costs.

2. Plan your trip to take advantage of tidal movement

The tide is a key consideration when targeting speckled trout, especially larger ones. Tidal movement concentrates baitfish, and larger speckled trout, being ambush predators, prefer to lie in wait, allowing the tide to bring their meals to them. Larger trout usually feed best during the last hour of an incoming tide or the first hour of a falling tide, especially during larger tides. This requires them to expend less energy to feed. I prefer a tidal range of .75-1.2 feet, but I’ve been successful with more or less tide; you merely have to adjust your timing or location to find the fish. My favorite tide is incoming, as it usually brings cleaner water to the beach.

3. Fish locations with structure that will hold fish

At a casual glance, most beaches seem featureless beneath the water; however, nothing could be farther from the truth. Besides the obvious structures above the surface, such as tips of islands and passes or cuts, sandbars serve as underwater structure to which big trout relate. Being the ambush predators that they are, big speckled trout love to sit on the bottom of slightly deeper holes, out of the main force of the waves and current, allowing baitfish to wash over them and striking them from below. Find these slightly deeper areas, and you will often find the trout.

Fish areas with concentrations of baitfish. Large speckled trout primarily feed on fish, so if you find baitfish, you often find trout. Look for nervous baitfish, such as rafted mullet or flipping pogies. These often indicate the presence of predators such as big trout, whereas relaxed or loafing bait usually means just the opposite. I have had success in dirty water that was full of baitfish, but rarely in clean water with scarce bait.

Be observant of your surroundings at all times. Watch for diving birds, which can indicate the presence of specks forcing bait to the surface. Oily slicks on the water’s surface also often indicates feeding fish below it. Remember that feeding fish are often upcurrent of the slick, as it takes a little while for the oil to rise to the surface of the water. Also, look for wave patterns to identify troughs that might hold fish.

6. Fish with the right types of lures

Certain lure types favor catching larger trout. Topwater and suspending hard baits such as MirrOdines, and suspending soft lures like Paul Brown’s Corky, Fat Boy and Soft-Dine XL are known big trout producers. These lures have the profile of a larger baitfish, and they suspend in the strike zone longer, often proving irresistible to larger trout.

While not absolutely necessary for success, clean water certainly helps. That being said, I don’t like it to be crystal clear. My favorite water is slightly off-colored or “trout green” water. Super-clean water often brings “gangster” species such as Spanish mackerel and bluefish to the beach. This can be frustrating when they start biting off expensive lures. Besides, speckled trout have keen vision, and slightly off-colored water helps maintain the illusion that your lure is something alive and edible, not a piece of plastic sporting treble hooks.

Although they are a vicious predator, speckled trout, especially those in the surf, are not at the top of the food chain. Trout are always “looking over their shoulder,” and are very sensitive to noise and vibration. This is one reason wade fisherman have an advantage in the surf, because waves slapping against the hull of a boat or trolling motor noise often spook trout. Big trout often hold close to the beach, using the shoreline to confine baitfish. Always cast from the sand first, slowly working your way out from the shore. Don’t wade any deeper than necessary. The deeper you wade, the greater the chance of spooking trout, and the harder it becomes to fish. Be quiet and make long casts, wading slowly to avoid making pressure waves in the water. The calmer the seas, the more essential stealth becomes.

If you are confident in the area you are fishing, whether from past experience or because of appearance, and you have favorable conditions, give it time and have patience. Big trout do not always follow the playbook exactly, and they feed when they are ready. Conditions on the beach change throughout the day and slight changes in water clarity, temperature, or barometric pressure can trigger a trout bite at any time. Remember, you can’t catch a big trout if you aren’t fishing!

10. Be aware of the moon phase when planning a trip

The phase of the moon has an effect on trout fishing, especially the average size of fish. Keep this in mind when planning a trip to the surf. 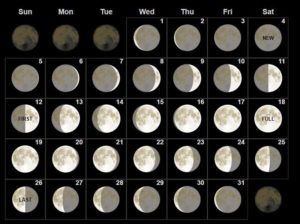 Moon phases seem to have a major effect on speckled trout fishing, especially when it comes to catching big trout in the months of April, May and June. Fishing around the two major phases of the moon (full and new) not only increases your chances of catching a trophy fish, but usually leads to a larger average size of the fish on your stringer. The actual day of a full or new moon usually isn’t the most productive, but several days before and after each of these two phases, with the full moon being my favorite. There are varying theories as to why this is the case; but from an angler’s perspective, the reason doesn’t matter as much as the results.

Perhaps it’s because the full and new moon phases usually coincide with the strongest tides of the month, and speckled trout typically spawn in strong currents. Trout often feed heavily for several days before and after these two phases, and females producing roe (usually larger than males) make up a larger portion of the catch. The phases of the moon are predictable, and when possible, you should try to schedule your fishing trips during the four or five days leading up to or just after these two moon phases.

Snap a pic and set it free

Big speckled trout are elusive, special fish. If you are fortunate enough to catch a trophy trout, consider releasing it after a quick photo. Really large speckled trout aren’t nearly as good on the table as smaller ones, and with the quality of today’s release mounts, there is no reason to remove such a precious resource from our waters.