New Iberia’s Clay Peltier has walked the two weirs along Bird Island Bayou in Marsh Island with cast net in hand for many years to catch shrimp for his redfish and speckled trout trips in and around Vermilion Bay.

Peltier isn’t the only one who frequents the weirs. Hundreds of boaters stop by the Big Dam Weir or The Belly Weir, a smaller weir, or both, in their quest to load the ice chest with shrimp, crabs, baby croakers, finger mullet and shad, and some also use the visit to catch flounder or redfish.

Why take the time and effort to cast-net for shrimp, croakers, mullets and shad to use as live bait?

“Depending on who’s fishing, live bait is always the right color,” Peltier said. “Live bait will help you find fish if you’re fishing with people who are just not experienced at fishing with artificials. They’ll be more productive and enjoy the day a lot better.”

At Marsh Island’s designated weirs, Louisiana Department of Wildlife and Fisheries regulations allow people to catch and keep 25 pounds of shrimp per boat during the shrimp season and 10 pounds per boat in the offseason. Peltier said he once was advised by LDWF Enforcement Division agents to beware of the possession limit. If you bought 10 pounds of shrimp at a bait shop and hauled in 20 pounds cast-netting during the shrimp season, you are over the possession limit.

The public is also permitted to cast-net for shrimp and fish for crabs at another weir, the Gordy Weir in Worm Bayou.

The only way to access Big Dam Weir and The Belly Weir is by boat. The nearest boat launch is Quintana Canal Boat Landing off LA319 at Cypremort Point. 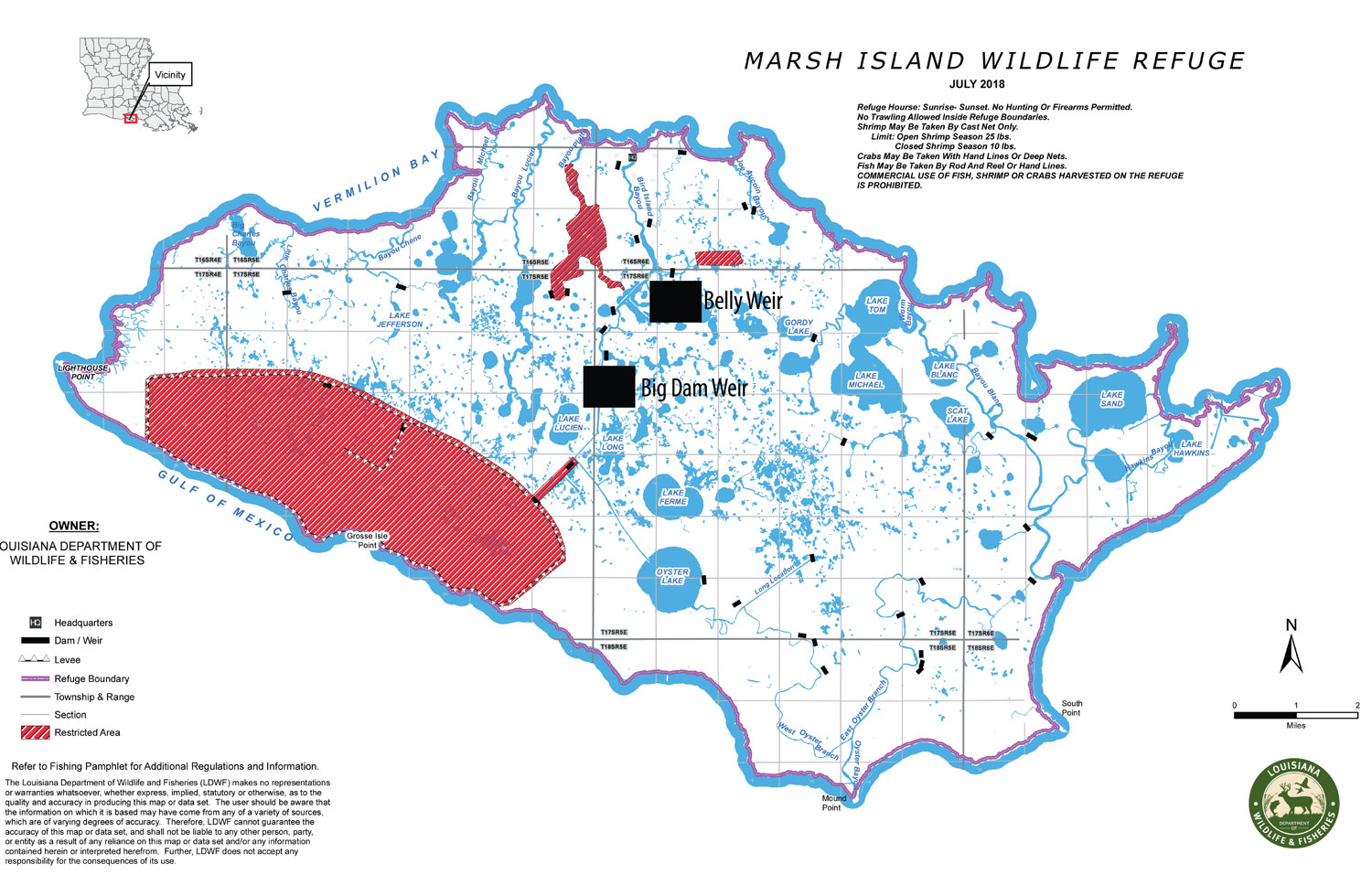 Peltier, 74, said cast-netting for shrimp at the weirs is best in the fall, not so much in July, but there are other draws that keep people coming to the Big Dam Weir and The Belly Weir.

Despite a drop-off in the cast-netting shrimp harvest, the Big Dam remains a top destination in July and August. Peltier has seen as many as 15 boats there on a Saturday or Sunday, which is one reason he prefers to go to the weirs in midweek.

Why the crowd? While baitfish such as croakers and mullets can be caught in cast nets, the lure is crabs, which can be caught only with hand-lines or drop nets, 12 dozen per boat per day, per LDWF regulations. A trip to the weir fuels countless crab boils at the Point and across Acadiana.

“When they’re running, that brings a lot of families here. They even bring beach umbrellas, settle for the day and let the kids run around,” Peltier said.

Jeff Marx, an LDWF biologist based in Lafayette, agreed: “The weirs are a popular area, especially for shrimping and crabbing.”

The Big Dam Weir is 6 feet wide and 120 feet long. The structure was closed after the storm surge from Hurricane Rita destroyed the old wooden platform/walkway in September 2005. It was replaced with FEMA funding at a cost of $49,400 and completed June 25. The fiberglass grating platform is nonstick and considered safer for that reason and because it is cleaner; the LDWF said before the weir was reopened to the public in time for the July 4, 2006.

Peltier targets shrimp like a pro when he goes to the weirs, mostly The Belly Weir.

“I usually do better at the smaller dam,” Peltier said, pointing out that it’s more compact and off the beaten path. “It is, and there’s not as many people. I like the little dam better,” he said.

Peltier is prepared when he goes to a weir to cast a net. Some of the things needed are a laundry basket, 5-gallon bucket, cast net and some bait.

Bait? Peltier and other successful cast-netters won’t leave home without it.

He makes the bait, which is used like fishing chum, at home. He buys fish meal at a feed store, mixes it with an equal amount of the cheapest flour you can get and water to the desired consistency, puts it in a Ziplock bag and freezes if he’s making it ahead of time. “It looks like a blob. A big pile of poop is what it looks like,” Peltier said.

At the weir, Peltier makes a few test casts with the cast net “to see if they’ve got any shrimp there.” If shrimp are present, he’ll open the Ziplock bag and squeeze about half of the goo into the water. Let the area set for about 15 minutes, trying other locations during that time, then go back and cast net the area.

Peltier said he uses a cast net with a ring for a reason.

“See this ring? It’s good for people who have trouble throwing it,” he said.

When shrimp are running at the weirs, he has no trouble throwing it and hauling in shrimp to catch speckled trout and redfish.