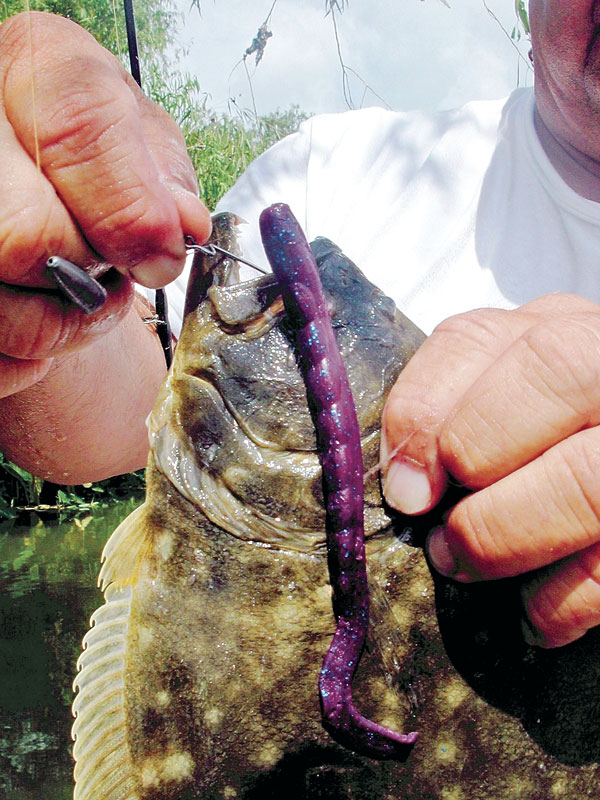 Fishing an array of artificial lures works to fool the big ones.

Few Gulf Coast anglers intentionally leave the dock hoping to stack a mess of flounder on ice, but nobody objects when they land a bonus “flattie” or two. Anglers who target flounder usually fish with live shrimp, minnows and other natural baits. However, artificial temptations can catch flounder and the finicky fish can’t strip them off the hooks as easily.

Since flounder obviously must spend most of their time on the bottom looking skyward, sinking lures traditionally make the best presentations. Many saltwater anglers fish jigheads sweetened with soft-plastic trailers.

“For flounder, some people like smoky curled-tail grubs, but I like brightly colored plastics,” recommended Mike Gallo of Angling Adventures of Louisiana, (985-781-7811, www.AAofLA.com) of Slidell, La. “I throw white, pearl or chartreuse grubs. I just drag it along the bottom. Flounder are very much scent oriented, so sometimes we tip jigs with a piece of shrimp. Gulp! baits and other scented lures also work very well.”

When specifically targeting flounder, use the least amount of weight possible, just enough to get the offering to the bottom. During a strong tide, upsize the weight, but not too big. Ambush predators, flounder commonly face into the flow to watch for prey drifting or tumbling naturally along the bottom, like an injured shrimp or baitfish caught in the tide.

“I definitely look for moving water,” said Tom Adams with Fishing Tom Guide Service (318-675-9114, www.fishingtom.net) in Hackberry, La. “Normally, I use a 1/8-ounce jighead, but I go to a ¼-ounce if necessary. I don’t want anything too heavy. I throw a bait upstream so it bounces along the bottom with the current. That’s when flounder pop it. I like a 3-inch Berkley Gulp! Swimming Mullet. My favorite flounder colors are pink or chartreuse.”

During a falling tide, small marshy ditches draining ponds pull bait out to deeper water. When fishing a falling tide, toss a soft-plastic shrimp imitation or similar temptation as far upstream as possible. Hold the rod tip high to let the bait barely bounce over the bottom. As necessary, gently lift the rod tip to keep the bait off the bottom and in the flow. Use the reel only to take up slack.

“I’ve caught flounder on a plethora of lures,” said Kyle Johnson with Coastal Waters Outfitters (228-669-3553, www.fishcoastalwaters.com) in Biloxi, Miss. “The great thing about artificial lures, flounder don’t play with it like live bait. When they want it, they hit it and swallow it.”

“My favorite flounder lure is a Down South Lures soft-plastic shad on a 1/8- or ¼-ounce jighead,” Johnson revealed. “I like a jighead with a short-shanked hook in 2/0 or 1/0. The shorter shank gives a soft-plastic bait more action because the body can wiggle and move around more. A person can also get a better hook set with a shorter shank. I also like a 3.5-inch Egret Baits Mambo Mullet swimbait in Cajun Pepper color with some red and gold flakes. It has a ¼-ounce internal weight. With the swimbait, I let it touch bottom occasionally, but try to keep it swimming just off the bottom. Flounder come off the bottom to smack it.”

Besides jigheads and swimbaits, flounder smash many other baits. Any bass angler who regularly fishes brackish marshes and river deltas probably caught flounder on practically every bait type in the tackle inventory.

“While targeting bass on the Sabine River system around Sabine Lake, we absolutely catch flounder on worms, jigs and many different kinds of baits,” Adams said. “Flounder are a lot more aggressive predators than most people think. I’ve had flounder hit lures so hard it almost ripped the rod out of my hands. Once, I saw fish busting baitfish and thought it was redfish. I threw a topwater out and caught two flounder.”

Favorite bass busters turned flounder finders, Texas-rigged worms, weedless jigs and similar attractants can put fish in the boat. A weedless bass jig tipped with soft-plastic craw imitates a crawfish or crab. Worms and weedless jigs can slip into thick cover where flounder often lurk. For fishing weedy shorelines, jetties, bridge pilings or similar places, flip weedless jigs as close to cover as possible and fish them vertically. The sudden invasion of its lair might trigger a reaction strike even from a flounder not feeding aggressively. If the bait hits bottom with no bite, jig it up and down a couple times. Then, drop it into another likely hiding spot.

Another bass technique, a wacky worm with a hook inserted into the middle rather than at the head slowly sinks like a dying shad or shrimp. Drop a wacky worm next to weeds or other cover and let it sink without additional action. A flounder sees a tantalizing silhouette slowly descending to its hiding spot with the tips quivering seductively. That prompts a predatory instinct. If nothing hits, drop it into another nearby pocket. This way, anglers can probe all along a shoreline, reef edge, jetty, bulkhead or other places that might hold flounder. Watch how the line moves for subtle bites.

“A typical flounder bite is a very soft, sensitive bite, just a nudge” Adams said. “Someone must have a feel for it.”

Flounder frequently slurp soft plastics, but these toothy predators can attack prey more aggressively. Anything that might interest a speckled trout or redfish could entice a flounder. Many anglers throw spinnerbaits or shallow-diving crankbaits for redfish. These baits imitate shad or other baitfish and might tempt larger flounder looking for a bigger meal.

Toss a spinnerbait to a shoreline, jetty or other cover. Let it sink to the bottom. Barely turn the reel handle to keep the blade flickering just off the bottom. Anglers can also fish wobbling gold or silver spoons the same way. With either bait, anglers might add a sliver of shrimp or cut bait for flavor and scent.

“I catch a bunch of flounder by slow-rolling spinnerbaits,” said Sonny Schindler with Shore Thing Fishing Charters (228-342-2206, www.shorethingcharters.com) in Bay St. Louis, Miss. “I’ll just dig it across the bottom. When flounder want a spinnerbait, they crush it.”

Use smaller crankbaits that generate good wobbling action and resemble pogies, mullets, croakers or other salty morsels. Run crankbaits parallel to shorelines, jetties or other structures. When fishing flats, use lures with bills that make the bait dive slightly deeper than the water. As the bill hits bottom, it digs up a silt trail. This commotion could attract fish.

Any brackish to salty system along the Gulf Coast should hold flounder. With low profiles and high tolerance for fresh water, flounder even enter coastal rivers. The marshes between Sabine and Calcasieu lakes near Lake Charles offer some of the best waters to catch big flatties in Louisiana.

“Flounder use some deep bayous off the Calcasieu Ship Channel when running to or from the marsh,” Adams said. “Some deep bayous at the south end of Calcasieu Lake, Kelso Bayou and the Salt Ditch areas around Black Lake are good places to look for flounder.”

People can also find flounder in the Terrebonne-Barataria Estuary, particularly around the Grand Isle area. Marshes, bayous and passes associated with eastern Lake Pontchartrain, Lake Borgne out to the Gulf of Mexico and south to the mouth of the Mississippi River offer unlimited excellent places to catch flounder.

Mississippi anglers catch flounder in the Pearl and Pascagoula River deltas, around the barrier islands and in the marshes surrounding Back Bay or Biloxi Bay. The Old Fort Bayou area near Ocean Springs can produce good flounder action. Many people fish the Bayou Caddy area and the marshes bordering Mississippi Sound between Waveland and Pearl River.

“Back Bay is a good place to catch flounder,” Johnson said. “We often go out to the Chandeleur Islands. Running a 28-foot boat with twin 200-horsepower engines, it takes less than an hour to reach the islands from Biloxi. In late winter or spring, I fish from the main island to the north.”

Situated in Louisiana waters, but accessible by boat from Mississippi, the Chandeleur Islands run in a giant crescent for about 50 miles off the southeastern Louisiana coast. The low, sandy uninhabited chain of barrier islands create excellent habitat for flounder and other species.

“We’ve caught some big flounder in the Chandeleurs while wade fishing,” Johnson recalled. “I am very conservation-minded. I say just take what you need and release the rest. If we really get into flounder, each person can take a good one home and we release the rest. We don’t want to overdo it, especially considering the population has taken a real dip in recent years.”

For the past decade or so, flounder populations plunged across the Gulf Coast due to various reasons, but they seem to be making a comeback. Larger females generally remain in inshore waters while smaller males prefer deeper waters offshore. Therefore, the overwhelming preponderance of fishing pressure greatly impacts reproducing females more than males.

Keep some flounder to make a few delicious meals, but release the rest, especially the biggest ones.

About John Felsher 23 Articles
John N. Felsher is a professional freelance writer and photographer with more than 1,700 articles in more than 117 magazines to his credit.