Terry Blankenship’s passion is finding and catching crappie year-round. And the fish don’t stand a chance when the summer heat pushes fish out to deep, flooded brush and standing timber.

His passion is catching these sometimes finicky fish with plastics, so Blankenship, a member of Bobby Garland’s pro staff, has really nailed down tactics to force feed even the most stubborn crappie.

Here are his top 7 tips for success:

• Get the knot right

While some anglers insist a loop knot provides maximum action for jigs being worked through structure, Blankenship insists the knot should be cinched tight.

But the final step in ensuring the bait presentation is natural is to push the knot to the back of the hook’s eye, in line with the shank.

“If you just tie the knot and throw it out, that jig is going to sit vertically in the water — and that’s not natural,” Blankenship said. “By pushing the knot to the back of the eye, the bait stays more horizontal, which is more natural.”

• Go light with your line

Even though you might be fishing tangles of brush, Blankenship said light line is critical.

Anyone can catch crappie when the fish are actively feeding, but sometimes you have to finesse them a bit to get them to bite. Blankenship uses what he calls the “dying shad” retrieve to trigger strikes.

“This is where you jerk or pop the bait upward and let it fall,” he said. “This mimics a shad or minnow that is dying but has a few kicks left in him. This is an easy meal for the fish.

“Sometimes, the fish just need a reason to trigger.”

Blankenship said it’s important to offer crappie baits that match the stage of the natural food sources. So he ensures he has a full range of lure sizes.

“I rely on Bobby Garland baits to follow the size of baitfish,” he said. “There is no other bait manufacturer that has lures from (tiny to large), and everything in between.”

Garland offers its Itty Bitty line of plastics to match early stages of baitfish growth, and their 3-inch Slab Slayers to provide beefier meals when natural bait has grown up.

“When you’re vertical jigging, don’t put your hand on the reel,” Blankenship said. “When you miss a fish and you reel in line, you pull the lure away from the fish, but if you don’t reel, you can just let that bait go right back down in front of them.”

• Be a line watcher 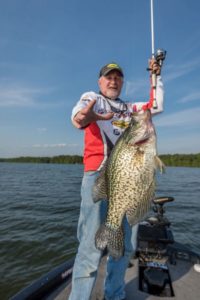 Life is easy when fish are jerking the rod out of your hand, but crappie bites are often very subtle. That’s why it’s important to pay close attention to your line for any hint of a strike.

“Crappie tend to come up behind a bait and suck it up,” Blankenship said. “A lot of times, you won’t feel the hit, but you can see it with a hi-vis line.

“Always be ready if your line goes slack. Set the hook.”

• Stick a Snickers in their faces

When the bite really gets tough, Blankenship turns to what he calls the “Snickers candy bar trick” to continue putting fish in the boat.

Blankenship starts by checking his Humminbird Helix electronics to nail down the depth at which crappie are holding, and then he counts down to that depth.

“Then I just hold the jig as still as possible above the fish — if possible, within a few feet of their ‘Snickers zone,’” Blankenship said. “Like me, if they see it they will eat it.”