Don’t be afraid to drop a bait or lure right next to a tree when crappie are making their big move to the shallows to spawn. Rub the bark, and you might get a bite.

Steve Danna slowly circled the lone cypress tree with the concentration of a lion sizing up its prey — looking for spawning crappie.

He began by swimming one of his favorite lures, a soft-plastic Bobby Garland bait in Cajun cricket color, around the outer edges of the tree, covering every side while gently raising and lowering the jig to cover several different depths.

The first pass yielded nothing. Danna moved closer and changed to one of his hand-tied hair jigs: a red head with a blue/chartreuse body. This time, he dropped the jig right on the edge of the tree, letting it slowly fall as close to the tree as possible and working it even under the lower branches. The second time he dropped it, he got what he was after.

That “thump” is the signature feel of a crappie that makes even veteran anglers experience a sudden rise in blood pressure. Danna lifted the crappie into the boat and dropped the lure back in the same place with the same result. Before he left the tree, he had three good fish — every one of them bit so close to the tree that many anglers would have missed the opportunity because they wouldn’t have been so determined.

“There are dozens of proven techniques to successfully catch crappie,” Danna said. “But none of them beat the thrill of the thump — actually holding a pole in your hand, tight-lining a jig and feeling the crappie take the bait. That signature thump is what it is all about for me. It’s my favorite way to catch crappie.”

This time of year, you might as well forget calling Danna by his real name. Just call him “Tree Thumper”. That’s because he is probably out chasing crappie, and he’s using his tree-hugging technique to catch them.

Fish in the trees

Late February and the month of March are times when you’ll often hear whispered conversations among veteran crappie anglers include the phrase, “They’re on the trees.” That means crappie are beginning to move shallow, are making nests and laying eggs at the base of cypress and tupelo gum trees.

It drives fishermen like Danna to not only fish around the trees, but up in them. Some even pull up into the trees and have one person hold onto the limbs while another works a jig down into places that seem impossible to penetrate with a lure. The tougher the presentation seems, the more successful the bite. That’s because the tighter you fish the tree, the more likely you are putting your bait where nobody has already fished, and where a female crappie is often going to spawn and male crappie are going to stand guard until the eggs hatch.

The best thing about “tree thumping” in Louisiana is that it works on almost every lake you can imagine, from riverine lakes like Concordia and Bruin to big reservoirs like D’Arbonne and Bistineau and smaller lakes like Black Bayou and Caddo. If the fish move from deeper to shallow water to spawn, and if there are stands of cypress or tupelo gum trees, this is a technique that will supply your fish fry.

Danna said the way to find and catch tree thumpers hasn’t changed. Early in the season, he picks out trees with a southerly exposure because they seem to warm up first. He finds crappie in small bunches of trees more often than straight lines of trees, but his favorite is a single cypress tree in 2 to 4 feet of water, but not far from deeper water. He will often pitch the jig past the tree and let it fall, but if they don’t hit that, he’ll get the tip of his rod as close to the tree as he can and drop it right down the side hoping to put it right in front of the fish.

The key to fish moving up on the trees is usually water temperature. It varies some from lake to lake, but when water temperatures get in the upper 50s they start to move in. When it hits 60 degrees, the bite is on.

Danna is one of many former bass fishermen who learned to love fishing for crappie. As he travels putting on fishing seminars and as an instructor at Crappie University, he shares a slide show that is titled, “Kidnapped by Crappie.” He also fishes professionally on two crappie circuits.

He will fish whatever pattern and technique he needs to in order to catch crappie, but his heart is always  dropping that jig down by the cypress tree.

“Fish as many trees as you can,” he said. “When they are on the trees, you’ll have the time of your life.”

Danna said there is kind of a “numbers game” when fishing trees for crappie. Every tree or stretch of trees won’t hold fish, and it isn’t easy to look at a tree and see if it will hold a crappie; you just have to fish them. You will begin to find that certain trees, or groups of trees, hold crappie. Concentrate your efforts on those instead of trying to fish every tree. You’ll also find that some trees only hold one crappie, but certain ones may give up five to 10 fish if you are patient. Only experience can teach you which ones.

Danna also reminds anglers that crappie feed up, even in shallow water, so don’t let your jig fall all the way to the bottom and leave it there. Fish at various depths. Also, on some days, crappie will want the bait totally still, while other days they like it swimming or jigged up and down. Pay attention when you get a bite, repeat the procedure, and you will get more bites.

“This time of year, we are subject to late cold fronts, and that can change fishing,” he said. “Sometimes, it moves the fish tighter to the tree, but other times, it will move the fish out 10 to 15 feet from the trees to the edge of deeper water. You just have to be flexible and put some time in on the water to learn that.”

Danna said he can’t complete a tree-fishing lesson without another important tip.

Something a lot of people don’t understand is that crappie don’t all spawn at the same time, and they don’t all spawn in the same place. The first ones get through, and more move in. If they didn’t, fishermen would catch them all around the bank, and there wouldn’t be any left.

Save yourself some trouble

In the latter part of March, as the water warms and the spawn draws to an end, fishermen can save themselves some trouble by paying attention to the water around the trees as they approach them to fish.

If you see hundreds of what appear to be small shiners swimming frantically in a circle around the tree, don’t fish there. You are too late. Those are more than likely crappie fry that have already hatched out but don’t feel secure leaving the nesting area just yet. Momma Crappie and Poppa Crappie have probably moved on, and there isn’t any need to fish that tree.

When crappie are on the trees, they can be finicky. You might have to be a perfectionist to get the bait where they’ll want to hit it. But when they are aggressive, they’ll hit a variety of lures you drop in front of their noses or anywhere near their spawning beds.

That’s one of the best things about fishing trees. Some anglers fish with a slip cork and live shiner, but most fish with either hair jigs or soft-plastic jigs on the trees.

Danna said a soft-plastic jig of almost any color will work if you put it in the right place, but he likes crawfish, pink/purple or blue/chartreuse best. His favorite baits for tree fishing are hair jigs in black, silver or gray. He does have one personal preference, especially on hair jigs; he likes red heads.

The Roadrunner, a popular spinner, can catch fish if you are around trees where you have room to pitch it out and reel it back slowly against the tree trunk. White and white/chartreuse are his favorite colors for Roadrunners.

When fishing against tree trunks, Danna said anglers can save themselves a lot of grief by learning to slowly lower and raise their baits in the water. If you lower the bait and pull it back up too quickly, you’ll get hung up a lot. By raising it slowly, if you feel it hit a limb or root, you can let go, then ease it back up again and not get hung.

Get your hands on a ‘Tree Thumper’

Not many folks get to fish the way they most like to, with a rod that they designed and that carries their name, but the Tree Thumper”by B’n’M gives crappie pro Steve Danna that distinct privilege.

He had spoken several times with Jack Wells, the company president, about making a crappie pole just for fishing trees and this year, after more than a year of development tweaks, it is now on the market.

The Tree Thumper comes in 10- and 11-foot lengths. It combines the lightness of B’n’M’s Ultra-Lite series with the strength of it’s Brush Cutter series to offer lightness and sensitivity while still being able to snatch slabs away from trees, root systems and stumps. Made of a blend of high-modulus graphite, it features ceramic inserts, a bottom reel seat, and a contoured handle made of 100-percent Portuguese cork.

“It’s light enough to hold in your hand all day-long and it’s not too stiff. It’s perfectly balanced and sensitive enough to feel the slightest thump,” Danna said, “but it’s got enough backbone to horse a big crappie up without so much bend that rod is nearly doubled.”

The tree you can’t see 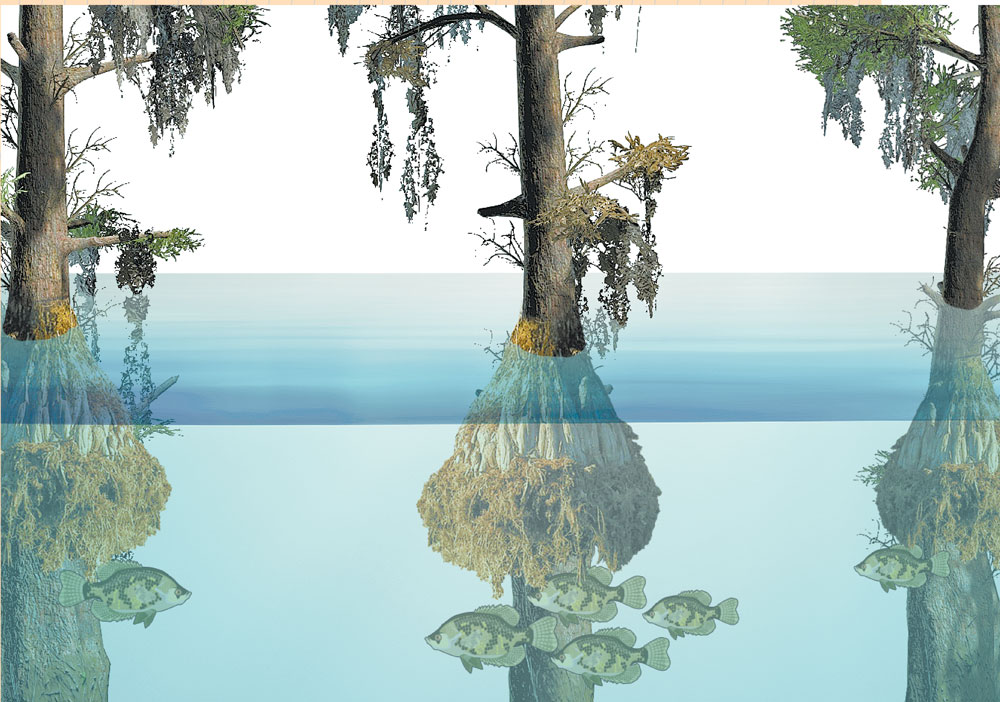 A normal cypress tree has a huge ball of roots under the water that stick out a foot to 18 inches from the trunk. Under that big ball is more tree trunk. When the water level is normal, this area below the roots is a prime spot for crappie to spawn.

To catch those crappie you’ve got to get your lure as close as you can to that area for them. If you just swim a lure past the root ball, you may not even have it where the fish are. That’s why “tree hugging” is an important technique to have for spring crappie.

Bayou D’Arbonne is one of Todd Garvin’s favorite places to fish in August. The main bayou, especially right below the spillway, is a hotspot. […]