There was silence as the slender, oblong cork slipped below the surface. Then followed an audible, slurpy pop as the cork, pulled under by a heavy sac-a-lait resurfaced noisily.

The fun tug-of-war was on but eventually the angler behind the light tackle prevailed. Soon, Bill McCarty got his hands on the biggest, fattest sac-a-lait of a trip in mid-February to Stephensville.

We were fishing the Duplantier Canal, also known as the “L” Canal, under budding cypress trees. The canal is part of a fish-laden maze of Union Oilfield canals near Stephensville. Duplantier Canal was the first of four destinations that included Barbier Canal and Pisani Slough, also in the Union Oilfield, and Hebert Canal in the nearby Oxy Field. 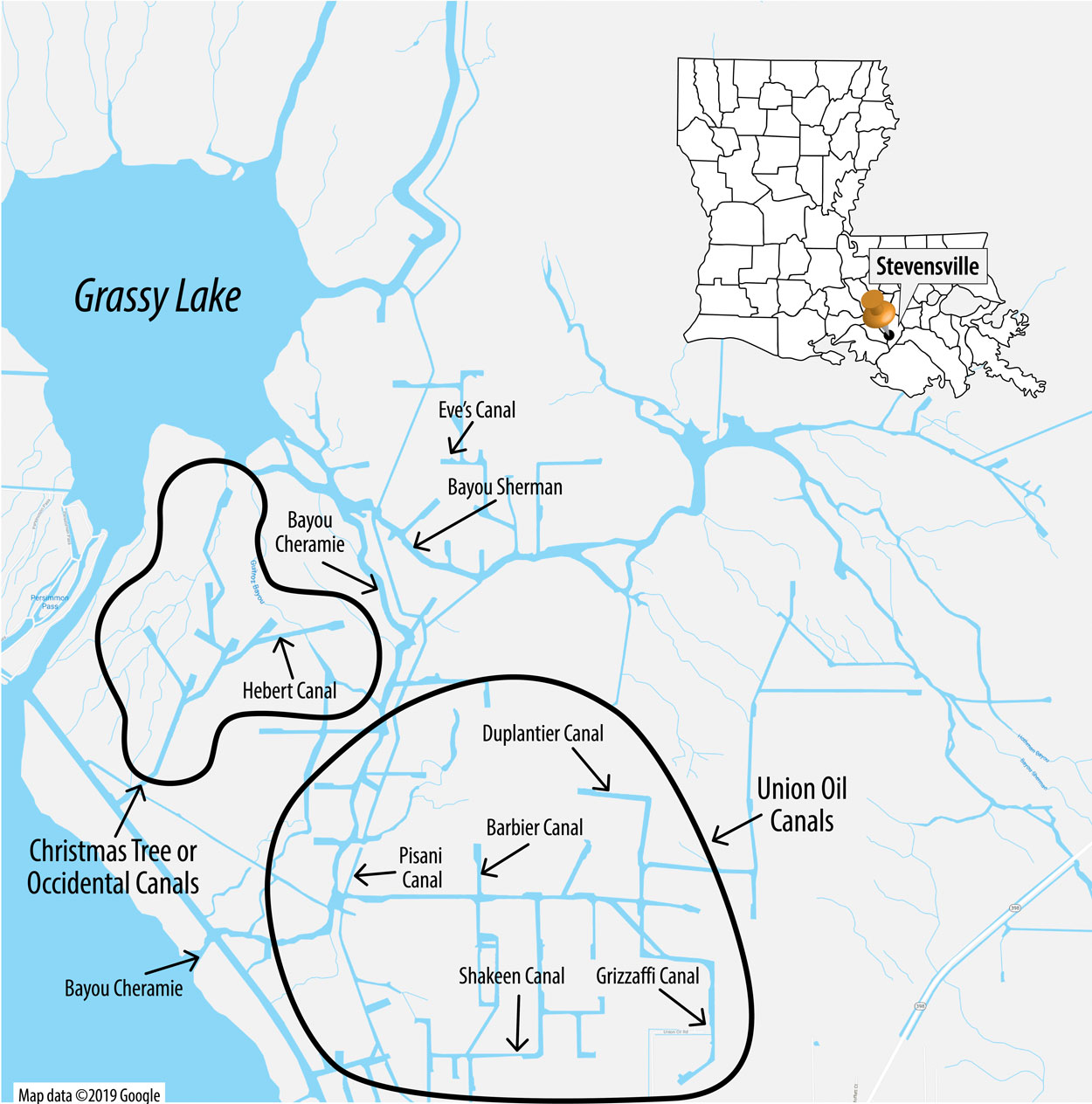 The takeaways from that scene are keys to putting sac-a-lait in the ice chest on the Stephensville side of the East Atchafalaya Basin Protection Levee:  Oilfield canals, Hard hookset, Poppa Chop, chartreuse Crappie Nibble and budding cypress trees. The combination is hard to beat.

“They’ve got to feel the steel,” McCarty said.

The lifelong Morgan City resident caught a few on shiners but most on his favorite blue/white hair jig and a black/blue/chartreuse minnow-shaped soft plastic. After starting with shiners, he switched to the Poppa-Chop, which he fished 2-feet deep, and said, “It’s a good bait. I’ve caught a lot of fish on it.

“When you get the first one, there’s usually three or four (in the vicinity). Typically,” he said with a robust chuckle, “the trick is to get the first one. I just want to see the cork go under, like that!”

Sure enough, the orange/white cork did a diving act and he set the hook on a sac-a-lait. Then he proceeded to hook and boat many more, starting with that first sac-a-lait weighing about 1 pound. A few minutes later, one of the day’s heavier sac-a-lait bit and instantly felt the steel. The tussle on light tackle was the kind that keeps fishermen fishing but in the end the angler held a solid 1 ½-pounder.

“That fish hit it when it was sitting still,” he said after unhooking it, kind of. The hook, imbedded so well in the bony part of the mouth, broke.

The biggest was caught soon after. It was a beauty by any standard. On this day quality overruled quantity.

“This is generally more a numbers game. But you’re also going to have what we have in there (the bigger sac-a-lait),” he said, noting there are plenty of slabs weighing “a couple pounds” lurking in the depths.

McCarty, 49, made deft casts with the Zebco on a baitcasting rod spooled with 6-pound test line. The casts required placement under branches and around trees and deadfalls with the occasional hangup.

“If you get aggravated every time you get hung up, this is not the game for you,” he said.

He has an answer to hangups, one he made himself with a 1-inch diameter PVC pipe and wood at the end shaped like a V. It has saved many hair jigs, tube jigs, etc.

Some sac-a-lait weren’t eager to eat the hair jig or soft plastic jig he presented. Those fish just nibbled and stayed safely in the water. After one particularly agonizing nibblefest on a Poppa Chop, jiggling the corkto and fro, McCarty said, “Oh, yes, it happens. They can be finicky, for sure. McCarty prefers the littlest cork he can get away with while jigging.

“A lot of times I’m hard-headed. If they don’t want to eat blue/white or black/chartreuse, if they ain’t going to bite it,” he confided, the result is fewer, if any, sac-a-lait to show for his time on the water.

He retrieved the artificials and the shiners as close as possible to cypress trees and other wood. Sac-a-lait stay tight to the cypress trees and root system, he believed, to have a hard surface to lay their eggs.

Sac-a-lait relate to structure much like another popularly targeted gamefish in the Union and Oxy fields.

McCarty, an accomplished bass angler whose biggest bass is an 8-14 at Lake Falcon in Texas, cut his sac-a-lait and bream fishing teeth as a boy with his father, Philip McCarty of Morgan City, and his uncle, Al Belaire of Morgan City. Many days found them, including Belaire’s daughter, in the latter’s small boat wetting a line in and around Stephensville.

One late winter or very early spring day in the 1990s, McCarty was fishing the Stephensville side with Dwight Barbier, his brother-in-law, and Dwight’s father, “Mr. Mo,” when they met an elderly fisherman in an Oxy Field canal who confided the sac-a-lait bite began two weeks earlier.

“We’d be in a canal catching and say, ‘They finally started biting.’ It seems like we were always two weeks behind. Finally, we ran into the old guy who told us when the cypress trees start budding, the sac-a-lait start biting,” McCarty said.

And the sac-a-lait bite is “pretty darned good” after the spawn, too.

“It usually is. It’s a time to eat and regain some strength. Something like this ought to be ideal in April)” he said as he scanned the scenic shoreline.

The area has so much to offer

The owner of WHM Services LLC, which conducts marine surveys on boats and barges, remembers limiting out many times in the days when the sac-a-lait limit was 50 per person. He’s had his fair share of trips with 25-fish limits over the past couple of decades.

He also put a handful of nice-sized bream in the boat, plus five bass up to 2 ½ pounds – the biggest giving him a battle royal on light tackle. His fourth and last stop of the day, one of his favorite long and narrow canals in the Oxy Field, usually is chock-full of bream but there were no takers while he fished for sac-a-lait.

“This is the canal we ran into that old man” who told the McCartys and Belaires about the correlation between the cypress trees budding and the start of good sac-a-lait fishing in the Stephensville area, he said.

That bream didn’t bite along with the sac-a-lait he caught that day in that canal surprised him. Regardless, he said, the bream fishing there and in other Oxy and Union canals should be red-hot in April-May.

“This is a good spot in late April. Oh, yeah, it’s a bluegill and chinquapin honey hole, too,” he said.

Sign Up Now
About Don Shoopman 472 Articles
Don Shoopman fishes for freshwater and saltwater species mostly in and around the Atchafalaya Basin and Vermilion Bay. He moved to the Sportsman’s Paradise in 1976, and he and his wife June live in New Iberia. They have two grown sons.