Follow these crucial tips to bring more bream to the boat

If you rank all the fish available to Louisiana anglers on an “excitement” scale of 1-10, the lowly bream would probably come in somewhere around a “2.” And it’s easy to assume that one of the reasons is because bream are just everywhere. They are easy to catch and don’t provide that much meat to eat, unless you like to fry them whole.

But the truth is, most Louisiana freshwater fishermen break into the sport bream fishing.

Not all are successful even at that. If they were, more fishermen might stay as bream fishermen. Being able to pass the exit exam of Bream Fishing 101 might just be the key to enjoying more success bream fishing, whether you are an eight-year-old just starting out or a seasoned veteran looking to put some tasty fish in the fryer.

“Bream fishing is a great sport, although often overlooked,” says Mike Wood. “Bream are eager to bite and good to eat and they pull like fish three times their size.”

Understanding bream, their habits and the basic skills of bream fishing can help you enjoy the sport more, Wood says. He should know. As the former head of freshwater fisheries for the Louisiana Department of Wildlife and Fisheries, he’s been around fishing all his life. And he realizes how unique bream are.

“Bream are the nervous busybodies of the freshwater world,” he says. “They have lots of predators so they have to stay together. And they’re constantly in each other business, hoping to score a tasty morsel or even a girlfriend from the other guy.”

There are bream in almost every body of freshwater in the state, from the largest reservoirs to small farm ponds. In many instances, you don’t even need a boat because you can catch them from the bank or fishing piers.

To catch more bream, Wood says to gear way down. If you want to use artificial bait, that’s okay, but keep the lure small and the line light. He likes 4 pound line because it casts further and handles so much better than 6, 8 or even larger line. The same applies for live bait. Use light line, small hooks, light weight, and a tiny cork. A live cricket slowly falling in front of a bream is too much for one to resist, especially this time of the year.

Catching bream on a “plethora”

Okay, a “plethora” isn’t a hot new bream bait. By definition, plethora means a large or excessive amount of something. One of the best things about bream fishing is the “plethora” of lures that you can catch the little critters on. The list is excessive.

The personal favorite of most people is the cricket. Sorry, but you have to buy the little grey ones at the bait stand. Those black ones that you catch under the street lights just don’t work as good. In fact, you can’t find them like you used to, so that may be a moot point.

Worms are a close second. The regular red worm variety wigglers are great and easier to use, but the big cold worms have gained in popularity over the years. They have to be cut or pinched in half unless you are after two pound bream. Good luck with that. The cold worms also seem to be more well favored by catfish, so many anglers choose them for the versatility. Then you’ve got meal worms, wax worms, plastic spinners, and even bream bites — little fishy smelling gobs of bright colored “stuff”…

If you are lucky enough to know someone with catalpa trees, that opens you up to a gourmet bream bait that bream love. Then you’ve got meal worms, wax worms, plastic spinners, and even bream bites — little fishy smelling gobs of bright colored “stuff”…

There’s more, like whole kernel corn, small pieces of hot dog weiners or vienna sausage will work. The best rule of thumb is this: If a bream can see or smell it and it’s small enough to fit in it’s little mouth, he’ll bite it!

“Aside from fishing with gear that’s too heavy, it’s very common for people to leave actively feeding bream after they’ve caught one or two,” Wood says. “Bream like to bunch up with others like them. If you catch one large one, there are probably others like him around. Catching a couple may scatter them, but they’ll come back. Wait them out.

“And try to keep the bumping and thumping in the boat or on the pier to a minimum,” Wood suggests. That’s not always possible with kids, but it does make a difference with the larger bream bite.

Can you have too many bream?

To maximize your bream population, it’s important to keep small lakes and ponds in balance with fisheries, water quality. Despite the best of plans, there are usually a number of potential problems that can upset the health and quality of a small water fish population. Bream populations play a key role in that.

“One of the most common small water problems is an unbalanced ratio of predator fish to prey fish,” Mike Wood says. “Left unchecked, these situations never get better on their own. However, there are often remedies to get things back on the right track.”

If you have a lake or pond that needs a simple fisheries management plan for bream or other freshwater fish, Wood works directly with property owners to offer experienced advice. You can contact him through his website, https://mikewoodfisheries.com 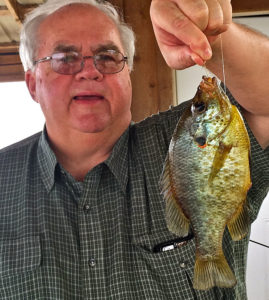 “Most of the time when people are talking about spawning bream, it’s either bluegill or redear sunfish (chinquapins, shellcrackers). Both species have similar spawning preferences and behaviors except chinquapin start a little earlier in the year,” Wood said. “Spawning beds will be on a firm bottom, usually some place that’s got some sand. Bream will dish out dead leaves and mud to make beds on sand, but they will not spawn if there’s not a firm bottom under there somewhere. The beds can be as deep as water clarity will allow. Sunlight is necessary for egg incubation. In most lakes, 2-4 feet is the norm. But, bream can spawn as deep as 18 feet deep in big lakes like Toledo Bend.

“The males move in first and make shallow depressions in the bottom as a nest. Then females move in for a romantic free for all. They spawn in groups that may have a few as 10 nests or sometimes as many as 75 nests so close they’re almost touching. Bream will spawn multiple time a year, especially in the summer and such activity is usually closely linked to a full moon,” Wood says.

When they are not spawning, bream usually scatter out a bit, but still like the same type of areas that they spawn in, just a bit deeper. They usually stay in fairly shallow water all summer long and they love stumpy areas, stands of cypress trees and the edges and holes of grass beds. They’ll get in brush tops and around fallen logs as well. Again, they need some place where they can find cover and stay in a bunch. They’ll stay there until late summer when the shallower water gets unbearably hot.

The term “bream” is collective for the nine different species of sunfish we have in Louisiana. Each has their own niche, but their preferred habitats overlap and they are often found mixed in together. Chinquapin filter bottom grit through their gill rakers in their search for small crustaceans and tiny mussels. Bluegill like lots of protective cover. Submerged vegetation and tree roots are good for that. Warmouth (goggle-eyes) have a big mouth and they like to hang around cypress trees looking for anything that will fit in it. There are other varieties of panfish, perch or sunfish that swim from one end of the state to the other in our lakes and rivers.

Chinquapins are a yellowish to white color with an orange or reddish dot on their gill flap. Bluegills usually red and dark bluish green colors. The smaller sunfish, especially those in rivers and bayous, come in a multitude of colors. These color combinations fall short as descriptions of adult male chinquapin and bluegill respectively. It’s just a fact that sunfish are among the most gorgeous fish ever. They have stunning color patterns and iridescences, particularly when first pulled out of the water.

And there is a reason they are called panfish. While they don’t provide big portions of meat, they are very sweet and tasty. Bigger bream can be filleted and fried or baked just like any other small game fish. But many veteran anglers don’t mind picking out the bones and still love to eat them the old fashioned way — fried whole. Either way, when combined with your favorite seasoning, a dose of corn meal and a pan full of peanut oil, you’ve got a tasty fish dinner that can’t be beat.

Dr. Ray Jones never wastes time getting to the lake when he thinks the bream are biting. He’s always ready to go. And he doesn’t waste any time standing in line at the bait shop, either, especially when the summer bite is on.

Witness his 2,000 cricket capacity cricket “box.” We’ve seen all kinds of bream buckets, cages, tubes, etc. But as his nickname, “Dr. Bream” indicates, Ray indubitably has the ultimate cricket bucket when he needs it. It was born of necessity a few years ago when he and some fishing partners ventured way back into the wilderness of north Louisiana for several days in a row to fish lakes where no bait stands were nearby.

But he’s apt to take it along on any trip now, loaded with crickets, just to strike up conversations with other bream fishermen in case they ask “how are they biting?” He’ll give that sly old smile and say, well, they are biting pretty good or I wouldn’t have this big cricket box with me!