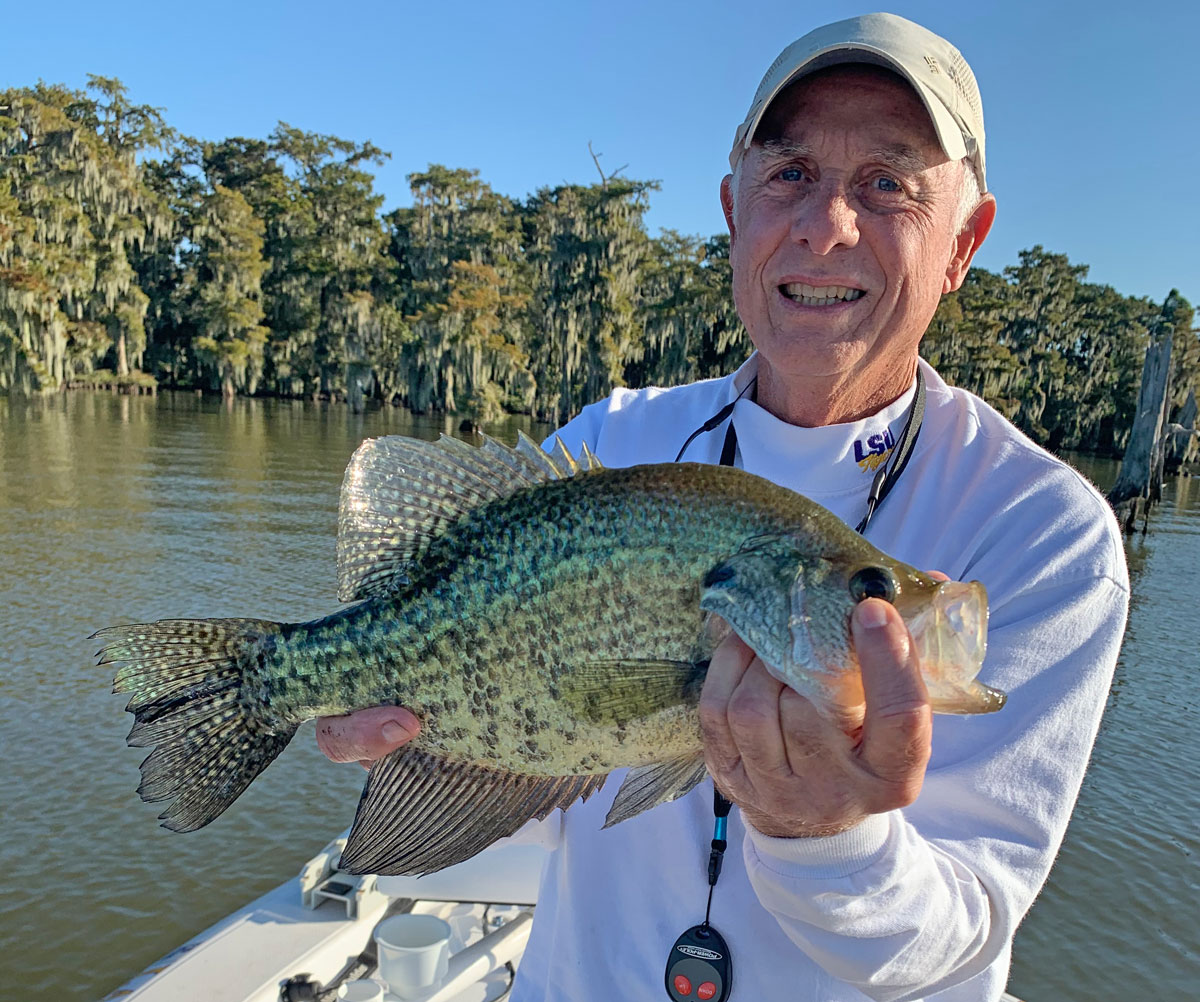 When Thibodaux resident Dickie Daigle set out to fish on Oct. 1 with his friend Glenn Landry, he said nothing seemed to be going right.

At least at first.

Even though the friends were seeking out catfish that day, Daigle said he likes to always bring some sac-a-lait bait … just in case.

“We left and were on our way to my camp and I realized I left my night crawlers, so we turned back around to get them,” Daigle said. “So we started off a little late, and the first area we went to we caught a few fish but they were small.”

Daigle said he decided to take his chances and guide his 19-foot blue wave boat somewhere else.

“The first place we fished is usually a good one, but there weren’t that many fish and the size wasn’t that big,” he said. “So I said, ‘Let’s go to this place I know I’m going to catch fish.’”

It was around 9:30 a.m. when the duo stopped at an area with a sunken tree.

“There were a lot of branches coming out the water and the first cast was that fish,” Daigle said of the spot near the Ike Canal. “I was dumbfounded.”

That fish turned out to be a 4.2 pound sac-a-lait. It measured 17 inches long.

“At first I thought it was a gaspergou because of the size,” Daigle said. “But my buddy fishes sac-a-lait all the time and he knew it was one. He grabbed a net and we netted it on the first try.”

Catch of the year

Daigle said the rest of the trip, in which he caught a one pound sac-a-lait and 22 catfish, paled in comparison to the big catch.

It turns out Daigle’s trip back to get his night crawlers paid off.

“It was just a plain hook with a night crawler,” he said of how he caught the fish. “It was my best catch of the year.”

But even with a catch that impressive, Daigle said it never dawned on him to get it officially state certified.

“I mean I weighed and measured it,” he said. “I have one on the wall at my camp, but this one could have ate that one. It never dawned on me that it could be a state record.”

Mounting the fish was out of the question for other reasons.

“I catch approximately 1,000 catfish a year rod and reel and I catch a lot of speckled trout during the winter months,” Daigle said. “I share of lot of the fish with my family and friends and my kids, but my sac-a-lait I do not share even with my kids — those goes straight on the frying pan.”

Daigle said he and his wife ate the fish for two days.

“That’s my favorite eating fish,” he said laughing. “I was more excited about the size of it because I knew I would eat good for a couple days.”

Daigle said he may still submit information on the fish, which should rank as one of the top in the state.

“It’s not too late … I’m thinking about it,” he said of submitting the paperwork. “But I’m going fishing again tomorrow.”

One recent trip, it was bone-chilling cold and we went crappie fishing, staring straight into a 23 mph north wind that stung. […]