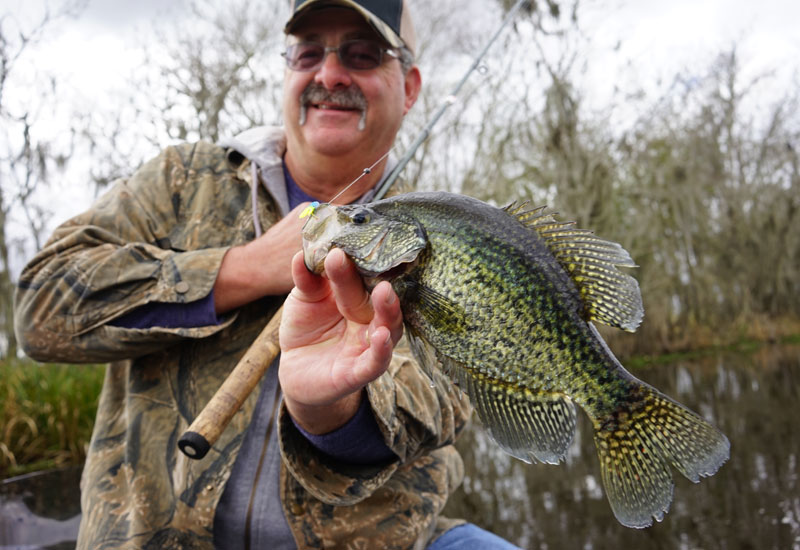 Word was out. The sac-a-lait were staging to spawn and anglers were catching plenty the first week of January. But by that Sunday, the action had cooled down considerably and good catches were few and far between.

“I hate the spawn” said Luling angler Tim Bye as we fished the Humble Canals off of Lac Des Allemands — and didn’t get a bite. “It’s so hit or miss.”

The main deal is the water has to be pretty. Look for clear water where you can see the bait 18 to 24 inches down. A couple days of warm weather is all you need there — pretty water warms up quickly.

Bye normally starts fishing sac-a-lait in the scenic Humble canals off of Bayou and Lac Des Allemands. If those areas are getting too much pressure, he’ll head on over to Bayou Bouef and the bayous and canals that flow into it. (Anglers can get to Bayou Bouef either by boat through Lac Des Allemands or by launching out of Larousse Boat Launch off of Highway 307 in Raceland.

After a hard rain, Bye fishes dead-end canals. “It takes a few days for the water to settle down,” Bye said. “Muddy water will push fish out of the bayous into the dead-ends.”

Sac-a-lait start getting into spawning mode when the water temperature reaches the upper-50s, Bye said, noting they start spawning earlier than bass —  but they don’t all spawn at the same time.

Water temperatures in the Humble and Bouef canals had already climbed to 59 degrees by Jan. 7, so barring any major cold fronts we could see sac-a-lait spawning much earlier this year than normal.

Cool and cold fronts will certainly come and drop water temps, but Bye said it’s just a matter of adjusting your depth to continue catching fish.

“They aren’t going to go far,” he said. “They’ll just pull out and wait on the water to warm up again.”

And if there’s a prolonged warm-up, the bite could get frenetic by February – or even before.

“If that water hits 60 degrees, they’re going to move closer to spawning — and when it hits 65 degrees, they’re doing it,” Bye said. “If you go in a canal and the water temp is 65 degrees and you don’t catch any fish, there are not fish in the canal; they didn’t show up.”

Until that happens, he recommended looking for those cut banks where sac-a-lait will spawn and working in 2 to 5 feet of water.

If you don’t get any takers, be certain to work all depths before moving spots because crappie won’t move a lot to eat.

“They won’t go down (to feed),” Bye said. “If they’re feeding, they might go up a little, but they’ll never go down.”

So this month he starts deep, and then works his way up to be certain he isn’t missing fish.

Once you get a bite, the odds are pretty good you’ll catch a few fish without moving.

“Wherever they’re at, they’re all together,” he said. “You can catch two or three, and if they stop biting you can come back later and there’ll probably be more fish there.”

If the water warms up enough to kick off spawning action, Bye said it’s not a prolonged affair.

So if you find fish right up on the bank one day and return and zero, just pull out and start working the depths.

Bye only fishes artificials, with his go-to being Panfish Assassin jigs.

“I don’t think color makes a difference,” he said.

His choice of poles is a 10-foot B’n’M crappie pole paired with the company’s West Point Trigger Reels.

“It allows you to get tight to cover. I can reach out and drop the bait right where I want it,” Bye said of the long rod. “But with that reel, I can also flip if I need to. It’s long enough you can go either way.”

“I’ll catch three fish to your one because you’re too busy reeling in,” he said.

Further west, Bill McCarty of Morgan City is ready to make a well-placed cast, set the hook and pull in slab after slab when February rolls around in South Central Louisiana.

McCarty, an all-around outdoorsman from Morgan City, knows just the area to work on putting sac-a-lait in the ice chest during the second month of the year, weather and water conditions permitting.

He’ll point the bow of his boat east to fish the dead end and dogleg canals along Bayou Penchant and Bayou Copasaw, including the Bluebird Canal and canals off the Hooch.

McCarty said to look for canals with clear water and with scattered grass. The sac-a-lait, which average 1/2 to 1 ½ pounds, could be 3 inches off the bank to 20 feet out, and in depths of 3 feet or less, to 6 feet.

“The Bluebird’s really good … just any of the dead ends off Bayou Penchant, or doglegs where you can get out of the wind and fish the back end.

“Sometimes you catch them feeding. Sometimes when you filet them, they’re full of minnows,” he said.

He catches many sac-a-lait along undercut banks, he added.

For sure, he’ll have tied on a 1/16-ounce jighead with a blue/white or blue/black/chartreuse colored tube jig with a chartreuse crappie nibble on it.

McCarty likes to fish under a very small, oblong Styrofoam orange/white cork — “the little bitty ones,” he said.

That way, when a sac-a-lait bites, there is as little resistance as possible.

He fishes for sac-a-lait with 6-pound line loaded on a spinning reel seated on a 5 ½-foot light action casting rod.

“It’s hard to beat a Zebco Delta 2,” he said about his reel choice.