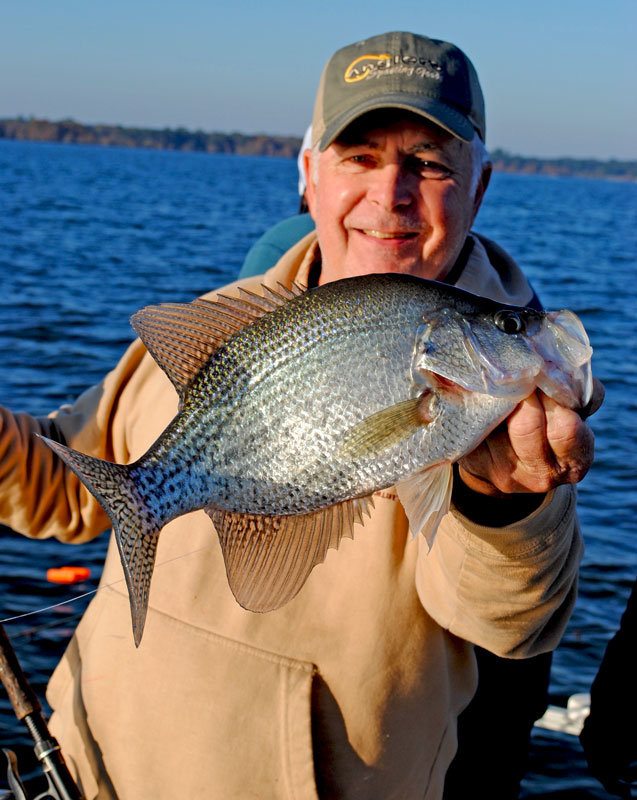 Planer boards allow fishermen to slow-troll their baits and lures in extremely shallow water as prespawn slabs move toward the bank. Here’s how to set up for this technique.

By the time March rolls around, crappie fishermen are chomping at the bit for waves of slabs to invade the shallows. And even though tight-line and long-line trolling techniques are proven winners, guides like Brad Taylor are adding another wrinkle, using planer boards to spread baits out even farther from the boat and access territory otherwise out of reach.

Most anglers would agree that spring crappie fishing is an endeavor where every inch matters — corroborated by the 16-foot rods that sprout from the bow of a serious tight-liner’s boat. The question is, how many split seconds can you give a fish to eye your bait before the hum of the trolling motor, hull slap or even the ping of a transducer give you away?

Planer boards take boat noises out of the equation.

“It’s not a lazy man’s game at all,” said Taylor, “but it’s a very good way to catch those spawning fish. You can get a bait up there in shallow water where you couldn’t get a boat without spooking the fish or places where you wouldn’t want to take the boat — like a submerged stump field.”

Taylor’s long-line trolling spread consists of three planer boards off each side of the boat. The first runs about 20 feet out, the second 30 feet out and the third 40 feet out, each staggered slightly behind the other due to the length of line necessary to add the distance from the boat. The rod whose bait is farthest from the boat is set in a rod holder closest to the stern, with the others staggered forward. This keeps boards and baits apart and cuts down on tangles when a fish is hooked.

Taylor said the tips of his rods should be raised slightly to lift more line out of the water so the planers cut into the water and fan out. In addition to planers, Taylor often runs a traditional spread of four to six long lines off the transom from 20 to 40 feet behind his boat.

“It’s a lot of work, because the guy on the shoreline side of the boat has to keep adjusting them to make them go around fallen trees or whatever is in the way,” he said. “You want to make that board go down the bank as close as you can get it. I like to fish them near cover and along breaks — places where the water will be 3 to 4 feet deep and drop off to 10 feet. Typically, the fish will be sitting off one of those drops. A lot of our spawning flats have a channel where the old creek bed went through, and you can run the boat through there and get the boards out into the shallow water.”

In a depth of 3 to 4 feet — trolling about 1 mile per hour — Taylor advises running a 1/32- or 1/16-ounce jighead with a 2-inch curlytail grub 10 to 12 feet behind the planer board, often lengthening the distance between the board and jig on the deeper side. 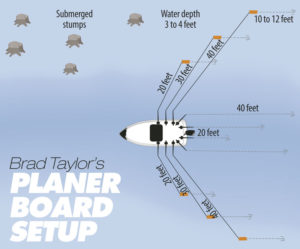 Two of Taylor’s favorite jig colors are chartreuse/black and yellow/white, but given the shallow cover involved, you’re bound to be sacrifice plenty of jigs. That’s why Taylor ties a short leader of 4- to 6-pound mono with a barrel knot to his 8- to 10-pound mono leader. This way, the leader pops below the knot on the lighter line before the clip is released, allowing the board to be retrieved without stopping the show.

“Crappie will rarely ever break the clip free when they’re hooked,” Taylor said, “and you run the risk of losing the fish or breaking the line if you try to snatch it free. I always just reel him up, because typically. you don’t have much line out. It works a lot better with two people. The guy fishing towards the front of the boat will reel him up beside the boat, and the other guy can dip the fish out at the back, but there are times when I just unclip the board and deal with the fish.”

While there are a number of smaller, lightweight planer boards designed to be less cumbersome for crappie, Taylor said these will often lack the necessary buoyancy to make the board cut into the water and fan out. He uses the same Water Bugz planer boards that he pulls for stripers, but he said any board of a similar size is sufficient.

While most folks stress about putting on a little weight, guide Brad Taylor said that when pulling planer boards for crappie, adding a little weight can go a long way.

“You have to put something on them,” Taylor said. “Water Bugz are the best that they’ve designed yet for crappie, but you don’t have enough resistance with that little jig you pull behind them. If you add little weight to the back of the board, you’ll get enough resistance to make it run hard.”

Most of the time anglers in the south use planer boards, they’re pulling bigger baits or lures for bigger fish; a healthy shad or a bigger shiner pulls enough to causes the board to angle up and out and reach the optimal distance from the boat. A 1/32-ounce jig is doing next to nothing for this cause, but with a little modification, Taylor can increase the board’s performance.

“The Water Bugz boards come with a spiral-type line holder on the opposite side of the line clip,” said Taylor. “I take those off and put a snap swivel on it to hold the line. On that same swivel I snap on a drop-shot weight. It’s something you have to tinker with, but it doesn’t take a whole lot of weight. A ¼-ounce will make it dig.”

About Dusty Wilson 5 Articles
Dusty Wilson of Raleigh, N.C., is a lifelong outdoorsman. He is the manager of Tarheel Nursery in Angier and can be followed on his blog at InsideNCFishing.com.