What does this mean for the future?

Anglers are destroying the crappie on the spillway side of the Atchafalaya Basin right now. And according to pro crappie angler Bradley Felder and Clyde Folse of The Crappie Psychic LLC, it should be on like gangbusters for the next few weeks.

The two anglers caught about 50 fish during a short trip right off of Flat Lake on Aug. 28. According to numerous Facebook reports, many other anglers are having similar luck after a long dry spell.

“We hadn’t really fished on the spillway side until Aug. 10, and the last time we’d been on a successful trip on that side was Oct. 13,” said Felder. 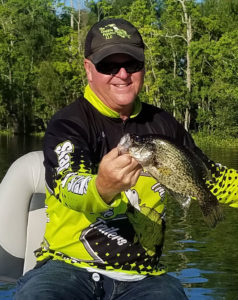 When planning a sac-a-lait trip, experienced anglers look at the river gauge, according to Felder. And for most of this year, the Morgan City gauge has read well over 4 feet. That’s too high for crappie fishing.

“In the Flat Lake area, we’re looking at the Morgan City gauge. You want 3 feet and falling,” Felder said. “This past weekend it was at 3.75. But because these fish have been in the woods for so long, (now that) the water is falling back out and (the fish) are falling back into the actual bite channels and not in the flooded woods, they are naive and hungry.”

“Any time we have such big water for a year, it really shuts down the spillway fishing. The next couple of years is always really good and will balance out the deficiency we’ve had this year,” he said.

Felder also said as long as the river stays like it is, the crappie fishing will be good in the basin. He expects an over-abundance of full fish boxes for the foreseeable future.