Single-pole techniques can put plenty of slabs in your cooler if you understand how to get your baits in the right places or to the right depths.

In the world of crappie fishing, tactics for catching these tasty panfish probably outnumber those for almost any other fish species. Last month, “Crappie 101” covered things you need to know about fishing with multiple rods, all set in rod holders, with the boat providing locomotion to the baits.

This month, “Crappie 102” discusses strategies where you hold a single pole in your hand, where you have to provide all the motion yourself.

Most anglers learning to fish started out by casting a rod. Casting works great for crappie as well, but moreso if you are able to control how long your bait stays in the depth zone where the fish are holding.

Two methods for controlling a bait’s depth while casting are using a slip cork to suspend the bait at a prescribed depth or counting a bait down.

Slip corks work great with either live minnows fished on a  light-wire, No. 2 Aberdeen hook or with a crappie jig in the 1/32- to 1/16-ounce range. Set a bobber stop at the desired depth and cast the bait or lure. Pulling and stopping will cause the bait to swing and not only adds more action to the bait, but covers more water.

Crappie jigs can be fished at a prescribed depth by counting down the jig as soon as it hits the water. Leaving the bail on the reel disengaged, count seconds until the bait reaches the desired depth. Typically, a bait will free-fall an average of one foot per second on 6-pound line At that point, engage the reel and slowly and steadily reel the line in to keep the bait at the desired depth. Bear in mind, crappie tend to feed in an upward direction, so stop the bait a foot or two above the level at which you have marked fish on your sonar.

Jigging for crappie entails a traditionally long,  limber rod to reach out to place the bait, usually a 1/32- to 1/8-ounce crappie jig, around visible, fish-holding structure like standing timber, stumps or a pier.

Jigging implies an up-and-down movement of the bait, but in essence, most strikes are elicited by simply placing the bait in the vicinity of the fish. As with any presentation, the bait should be at or slightly above the level of the fish, since crappie are generally inclined to look up and feed up.

For this reason, the most-effective jigs for using a jig pole have static action, meaning that the rubber, plastic, hair or other material comprising the bait tends to “shimmer” in place, giving the bait a lifelike action while sitting still.

Another effective presentation for jigging involves swinging the jig forward above the surface and allowing it to swing back toward the angler under the surface, like a pendulum. If the jig swims past structure on it’s circular fall, all the better.

Depth of presentation is key to jig fishing, as mentioned crappie feed and face up. Jig fishermen frequently measure the depth of presentation by the amount of line out. Some pole manufacturers even assist in this endeavor by placing marks at one-foot intervals down the length of the rod. 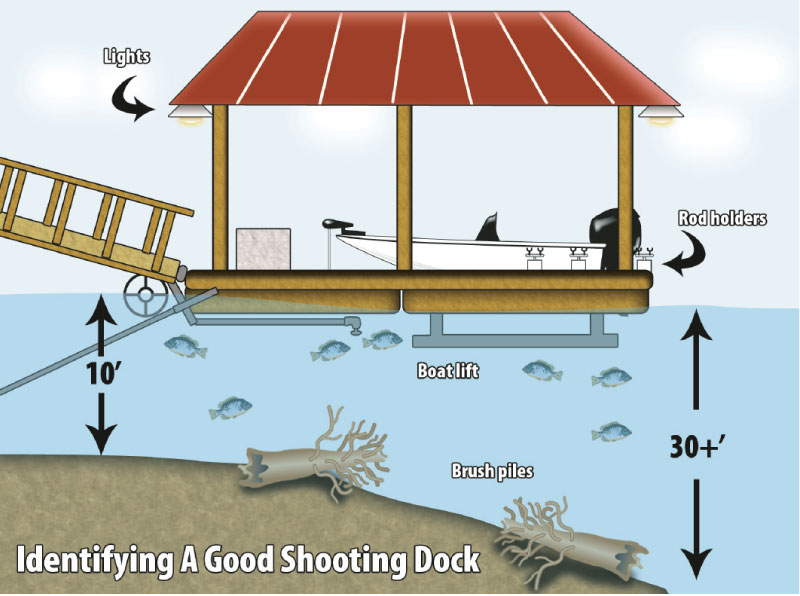 Dock shooting refers to holding the bait, typically a small crappie jig, in one hand, while using the other to hold the line tight to the spool of a spinning reel with the bail open.

To execute the shot, bend the rod over and hold the jig between your thumb and forefinger, under the reel. Release the jig and simultaneously release the line, which sling-shots the bait forward, parallel to the water, causing it to skip up under the boat or dock or other overhead structure.

Boat docks come in two basic styles: floating docks and piers or pier docks. The big difference is a floating dock has little or no support structure attaching it to the bottom. A pier dock has vertical, and more often than not, supplemental diagonal and horizontal supports, for stability. The two styles of docks fish differently.

Some dock shooters prefer floating docks because there’s no support structure under the dock to cause hang-ups. If the fish are under there and you feel any kind of catch or tension on your line after you shoot the jig, you’ll know pretty well it’s a fish.

Piers can be more aggravating to shoot because of support piers and cross members, which may snag the jig on the fall or retrieve. However, more structure often means more fish.

Making a good shot is important, but what happens after the shot is just as important to detect bites. By using a 1/32-ounce rubber bodied jig, the bait sinks slowly and gives the fish a long time to look at it falling under the protected area. Any movement of the line — a pause, twitch or shudder — signals a crappie has inhaled the bait and the angler should set the hook.

The next few seconds are important to get the fish’s head turned around and begin guiding the fish out of the heavy structure.

According to Tom Mundy, owner of Fish Stalker Lures in Laurens, S.C., the science behind finesse fishing for crappie in cold water is understanding that the colder the water gets, the tighter crappie will school on structure such as rocks, bridge pilings, submerged timber and brush piles.

Crappie won’t move very far to take a bait, but some years ago, Mundy discovered that if you put that bait right in the fish’s face, again and again, the action can be non-stop. Along with designing a whippy, lightweight rod for crappie rod manufacturer B’n’M, Mundy also began producing tiny, shrimp-like slabtail finesse baits that could be fished on tiny 1/64-ounce jigheads.

Mundy uses the finesse tactic any time crappie are found in deep water, both spring and summer, but he has better success, in terms of the size of crappie caught during the winter.

“Boat positioning is real important,” Mundy said, “You want to be right over the top of the brush. Some people frown on fishing under the trolling motor, but I’m fishing in 20 to 25 feet of water, and the trolling motor only goes down about 3 feet, so I don’t view that as a potential disturbance to the fish below.”

Mundy pays close attention to the line and his pole’s sensitive tip as the jig sinks. Once it settles, he retrieves it using a slow, continuous turn of the reel handle.

“It took me a long time to distinguish between a bite and the jig bouncing off a limb,” Mundy said. “The secret is watching the rod tip. When a crappie sucks the jig in, the rod will go from a limber bounce to a stiff look; that’s when it’s time to set the hook.”

“You can also watch the line,” he said. “The line will twitch long before you feel it with the rod, or it will start piling up in the water, which says the crappie sucked it in and is holding still while the line’s still sinking.”

Say, are you the outdoor writer? What is this fish my husband caught?

July 28, 2022 Joe Macaluso Columns, Down on the Dock, Fishing, Newsletters

If you work in the writing business long enough, well, there are stories you remember for a long, long time — even longer. […]