If someone said, “I caught a good-size shellcracker,” you would have an idea about the size of the fish.

Occasionally, a comparison of a fish to a bit of human anatomy can help; for example: “That shellcracker was a two-hander” or “That bass was as big around as your thigh.” As far as systems go, it works.

But from time-to-time, this custom is inadequate for the task. For instance, what if the fish is a 72-pound catfish, and the closest anatomical equivalent is the breadth at the shoulders of a 5-foot-11, 240-pound man? Does ‘big catfish’ cut mustard when we’re talkin’ ‘like in the Bible’ big?

J.R. Watson, a 42-year-old fisherman from Converse, knew that something strange was happening at night on the trotline he’d strung near his house on Toledo Bend Reservoir. Over the past couple of weeks, many of his hooks were being straightened out and broken, so he added some beefier tackle, staging 500-pound braided lines and 12/0 circle hooks that he baited with bluegill.

The next day, Watson loaded his micro pontoon boat with his gear and set off to check his lines.

Within minutes, he was tugging on the end of his set.

“I could tell by where my markers were that there was something big on the other end,” Watson said, “so I eased the line back down, and went back to my house to get my big net.”

A few minutes later he was working his line, foot by foot, stage by stage, the way he always does. He assumed he had a giant gar on the line.

A biggun on the line

As he drew closer, Watson thought he could make out a shape in the murk, but he wasn’t sure what he was seeing. He kept looking for the long, powerful body of a big gar, but this was something else.

What in the world?

“When I saw what it was, I basically panicked,” Watson said. “I knew the fish would hardly fit in the net, and I was out there in a Pelican 10E, a little plastic pontoon boat. 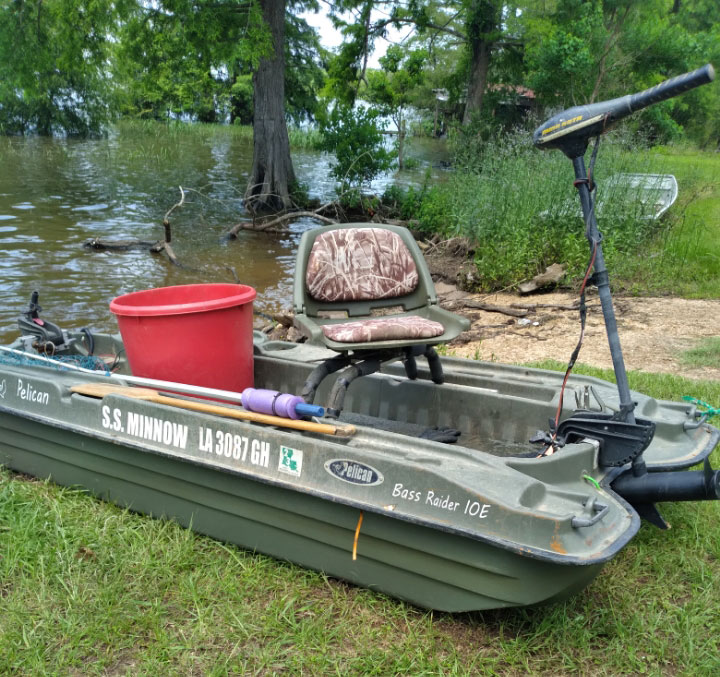 Watson played the giant catfish for what must have seemed like an eternity.

“I just kept playing it and wearing it down,” he said. “Finally, I got its head over into the net, and I just lunged over the side of the boat and grabbed the other side of the net and pulled it over into the boat.

“When I leaned over to cut the line, I happened to look down,” Watson said, “and that black seam (where the two halves of the plastic pontoons are joined) was underwater, and I knew that if that seam was underwater, water was getting into the pontoons.”

After he cut the line, he scooted as much gear and fish as he could to the other side of the boat to try to balance the weight. “I left its head in the net, because I knew if it started to kick, it would knock me, my seat, and everything out of the boat.”

“Pelican says that the boat won’t sink because the pontoons are supposed to have Styrofoam in them,” Watson said, “but I didn’t want to find out.”

Getting the cat weighed

Luckily, he made it to shore with the fish, his gear and the boat, but Watson doesn’t credit luck with what happened on the water that day. “It was just a God-gift is all I know,” he said, “because there is no reason that I should have even got that fish into that little boat.”

“The only way I had to weigh (it) was on bathroom scales, so I weighed myself, and then weighed myself holding the fish. I did the math, and it came out to 72 pounds.”

“The head of that fish is as wide as my chest,” he said. “I told my wife that I’d have been upset if I had to throw back my fish to save my boat.

She said: ‘You would have sunk that boat before you turned that fish loose.’”