The Grand Isle International Tarpon Rodeo was first conceived in 1928, which makes it the longest-running fishing tournament in the United States. It is also one of the biggest annual events on the island. People come from all over the Southeast to participate and pack the small island to its limit.

Capt. Jeremy McHugh, winner of last year’s tarpon division, is ready to do it again.

“It will be an early migration for tarpon from what I have seen so far,” he said. “Tarpon season typically lasts one to three months and is dependent on the migration, water clarity and water levels. It will be a little bit more difficult this year than last year to place. The tarpon will show up a few weeks earlier, so the competition will be tougher.”

Last year was McHugh’s first year participating. Before that, it took him and his team three or four years to hone their skills targeting tarpon before business was opened. McHugh’s Stillwater Fishing Charters is one of the few, if not the only guide/outfitter that targets tarpon out of Mississippi.

“The group of guys that taught me how to tarpon fish around Mississippi and Louisiana are members of the Grand Isle Tarpon Club,” he said. “(In) 2019, we got the lucky hand. We got on the fish early on.”

McHugh briefly explained how fishing the three-day tournament went. They were able to jump a decent tarpon the first day, but the second day, their video of the catch-and-release didn’t qualify as a catch by tournament judges. This left them scrambling the last day to put a winner on the board. Thankfully, McHugh and his crew finally caught, tagged and released a quality tarpon the final morning. 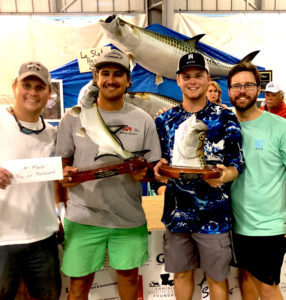 Tarpon used to be caught around Grand Isle, but that isn’t the case anymore. Anglers have to travel east, towards the mouth of the Mississippi River, to locate possible migratory pods. It’s not always a guarantee that a tarpon will be caught, but thankfully, other divisions were created, includes pelagic fish.

Owner of the Whoo Dat sportfishing boat, Keith Richardson sponsored the tournament for 10 years running and consistently fished it until five years ago. His last prize was a first-place trophy for miscellaneous catch for a 740-pound blue marlin.

“The tarpon side of the tournament is usually good,” he said. “There are talented people from Louisiana that compete and win consistently when the tarpon are there. The speckled trout side also has a lot of stiff competition.”

The increase in divisions has undoubtedly kept this tournament going all these years.

But, according to Richardson, participation has steadily declined, despite the increase in divisions.

“New people volunteering their time could change this,” he said. “There are Grand Islanders that are energized to help with the Rodeo. It’s a long standing tournament that many people are ready to get on board to revamp.”

This year’s Rodeo is scheduled for July 23-25. Registration information can be found at www.tarponrodeo.org. Categories that can be entered include slot redfish, Spanish mackerel, king mackerel, grouper, speckled trout, flounder and cobia. There’s even a division for gafttop catfish.