We don’t want to talk about it, but it happens far too often. A fisherman is having the time of his life one second, and the next, he’s seriously injured or fighting for his life. Hunting safety is a popular subject, but the truth of the matter is, there are more serious boating- and fishing-related injuries and deaths than hunting accidents.

Hunters are constantly reminded of safety in the woods. You have to pass a hunter-safety course to be able to buy your hunting license and get in the woods. But fishermen? What can happen to you out fishing? Here’s your license. Just go have fun.

Sometimes, it’s a little thing, like getting a crappie jig in your finger or a treble hook from a topwater bait in your forearm. Those can get serious, however, because complicated infections abound after on-the-water injuries, but the range of accidents while fishing is just as broad as any other activity: cutting off a finger in a trolling motor prop, falling in the lake and hitting your head on the side of the boat, get a slipped disk pushing on a boat trailer — all kinds of things happen on a more-regular basis than anyone wants to talk about.

Most accidents can be avoided by putting safety first, but when people go fishing and boating, they tend to get excited. And that’s when it happens.

“You want to get out there and get to your spot in a tournament, or just get out there and catch some fish for fun, but you can’t get caught up in the moment and forget about taking care of yourself and others in your boat,” said BASS Elite pro Brett Preuett of Monroe, who knows from personal experience and watching others.

It’s a special bonus for young bass pros to get their photo in a fishing magazine or to be shown catching fish in a few clips on an outdoor TV show. Preuett has had those luxuries many times, but there was one brief moment of publicity he wishes he would not have gotten. In fact, he wishes the moment would never have happened. It’s what he calls one of his “Not Top 10” moments.

“The deal was, I was fishing like crazy trying to make it to the (Bassmaster) Classic, and the big spotted bass were schooling, but you had to be on them within a second or two, or they were gone,” he said. “I saw a big one and reeled in my bait fast as I could. I didn’t get it in far enough and when I whipped the rod back and threw hard as I could, the big topwater caught me square in the back of the neck. It almost knocked me out. Two of the big treble hooks buried in up to the base. It was bad.”

And it was caught on camera.

Preuett kept on fishing, BASS sent medical help and fixed him up in the boat, and he made the Classic.

“Getting a hook in you isn’t fatal, but it does hurt,” he said, “and it can sure mess up your day. I’ll tell you another thing; when you get your bait hooked in a tree, go get it. Don’t jerk and pull hard as you can because you are very likely to hook yourself or your partner. It’s not worth the risk for a $5 bait.”

Obviously the most serious concern for fishermen is a boating accident, either someone being ejected from the boat or two watercraft colliding. As a pro fisherman, Preuett said that is always on anglers’ minds.

“Fishing tournaments, it’s going to be crowded, especially at take-off and weigh-in,” he says. “And lots of times, there are hundreds of spectators on the water. When it is crowded in a tournament or just a Saturday morning when you are out for fun, just slow down a little bit. Be aware of your surroundings, drive safely and watch out for the other boats. You are just talking about a few minutes. It’s not worth rushing, pushing your luck and getting hurt.”

Spend some time looking around your fishing rig and ask yourself, “What if?” That’s what Preuett does. Even little things matter, like turning off your trolling motor every time you aren’t going to use it for a while. Leaving it on exposes anglers and others to the possibility of breaking or seriously cutting a finger or hand. Preuett also carries a spare set of clothes and jacket in one of his compartments. Again, he learned about that the hard way.

“I was up on Table Rock, 40 miles from the landing, and I tried to reach out and get a bait unhung,” he said. “I fell in, and it was 40 degrees. Thankfully, I had a towel and a chance of clothes, or it would have been bad. Hypothermia is nothing to fool around with.”

Today’s anglers also have no excuse for getting caught out in dangerous weather. Preuett uses his cell phone to get the latest weather reports, and if something bad is coming, he gets out of there. It’s also a good idea to have a spare charger if your boat doesn’t have a charging port.

“Be prepared for emergencies before they happen,” he said. “Keep the stuff in your boat you need, and then pay attention to what you are doing, so you hopefully won’t need it.”

The two most-important fishing safety devices are no brainers for Preuett.

“Never turn on the key on the big motor until you’ve got your life vest on and fastened and your kill switch securely fastened,” he said. “I don’t care how many times you have made a run or how well you know where you are going, you never know when a log might float out in the boat run, or you might have to dodge another boat. Or your steering could fail. All those things have happened. You don’t want to go into the water with that big motor still running. We’ve all seen and heard what that can lead to.”

Put out that fire

The law requires fire extinguishers in boats, but Preuett didn’t have to get one just to stay legal. He learned as a young fishermen how valuable they are.

“My dad and I were out fishing when somehow, the batteries in the back of the boat shorted something out and caught fire,” he said. “Thank goodness we had a fire extinguisher, because we were able to put it out quickly. You know what is always sitting right next to the batteries? The gas tank. Never go without a good fire extinguisher.”

Preuett also reminds fishermen to keep the fire extinguisher where you get can get to it in a hurry, not in a compartment or too close to the back of the boat where it could be close to a fire. Boat fires usually only have two outcomes: one, you put it out quickly; two, the boat is gone. 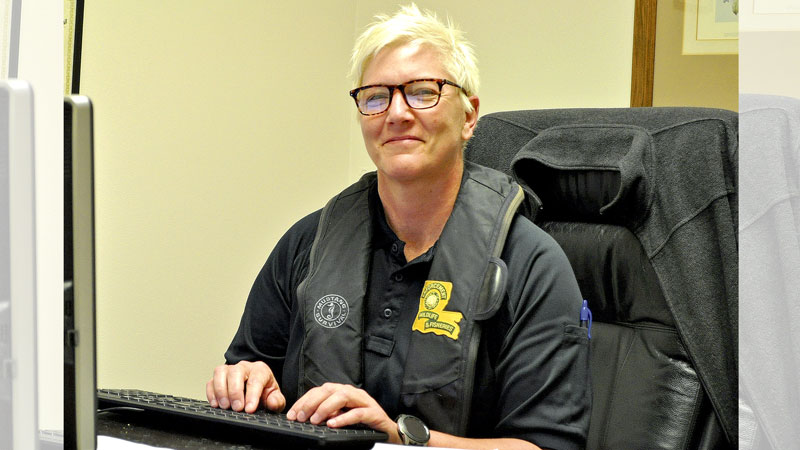 “We’ve made a lot of progress in making boating a safer experience, and we will continue to look at ways to make it even safer in the future,” she said. “Actually, I think most people are becoming more safety minded when it comes to boating, not less. Since 2003, Louisiana has required mandatory education for anyone born after Jan. 1, 1984. Mandatory boating education is creating a generation of boaters that have been informed about best boating practices.”

Other states are headed in the same direction. Increased mandatory education, outreach to growing numbers who take part in paddle sports and canoeing, tougher enforcement and better information sharing through social media all contribute to more safety awareness on the water.

Wherever you fish and boat, Zechenelly has some good advice.

“Wear a life jacket. Take a boating education course. Don’t drink or take impairing medication while operating a boat,” she said. “It is also important to file a float plan. Even if you are on a short, freshwater fishing trip, let someone know where you are going and when you plan to be back. It’s basically just common sense, but commonly, people often don’t do it.

Good emergency communication plans, monitoring the weather and just knowing the rules of the road on the water are important to preventing accidents and also to keeping them from becoming more serious in the final outcome. As with any outdoor pursuit, it’s simple. An ounce of prevention is worth a pound of cure.

If you go fishing or boating, don’t be in denial. Accidents can happen, and it is important to know the facts and take precautions so you won’t end up a statistic.

In 2018, the U.S. Coast Guard compiled reports of 4,145 accidents that involved 633 deaths, 2,511 injuries and approximately $46 million dollars of damage to property.

Here’s a quick glance at the facts:

Biologists share their advice on what WMAs public-land hunters should go to for deer during the 2022-23 deer season. […]