But when the weather broke for a bit, the Mansfield 9-year-old and buddy Carter Bell headed to a farm pond to catch a few panfish.

They only caught one bream — but they ended the one-hour weather break with a 6-pound bass.

Without even using their fishing rods.

“I told (Trip) to go over and check his stringer,” Payn’s father Scott Payn told LouisianaSportsman.com. “It was going crazy.”

When the younger Payn pulled in the stringer, the big bass was attached.

“It was like a 6-pound bass,” Scott Payn said. “It had swallowed the bream. It was stuck in his throat.

“I couldn’t believe it.”

They quickly videoed the event, with Trip Payn telling buddy Carter how the bass had been caught. Be sure to watch the video.

“My son has blind luck, I can tell you,” the elder Payn said with a laugh. “Outside of (fishing) farm ponds stocked with 6-pounders, I’m at the 3- to 4-pound range (as big fish), and we fish all the time.” 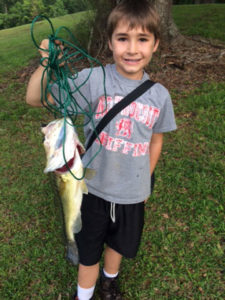 The anglers worked the bream loose and released the bass.

“Anything that big has to be released,” Scott Payn said. “They ate the bream, and released the bass.”

Sign Up Now
About Andy Crawford 863 Articles
Andy Crawford has spent nearly his entire career writing about and photographing Louisiana’s hunting and fishing community. While he has written for national publications, even spending four years as a senior writer for B.A.S.S., Crawford never strayed far from the pages of Louisiana Sportsman. Learn more about his work at www.AndyCrawford.Photography.