Look for areas loaded with bait and make long casts

July is here, and along with the heat comes an exciting way to fish for bass in the rivers and bayous that empty into Lake Pontchartrain. Bass fisherman Dustin Touchet of Slidell said out of the various ways to target bass, his favorite is using a topwater popper during the morning to catch aggressively feeding fish.

“Oh yeah. This is what I live for right here,” he said.

Touchet has been catching a limit on every trip, using baits to mimic baitfish being ambushed by bass during the cooler, early morning hours.

While he fishes all over the Northshore, he admits he has a favorite bayou that he said “looks like a river but behaves like the marsh.” Spanning 5 miles, Bayou Bonfouca originates near Highways 190 and 11 in Slidell and empties into northeastern section of Lake Pontchartrain.

The name Bonfouca dates to a time when the Boc Fouca tribe inhabited the land along the bayou. The name Boc Fouca translates to “bayou people,” but it has changed from the 1700s to what is now called Bon Fouca which means “good people”.

At its northernmost location, Bonfouca begins as a typical river with cypress knees and overhangs dominating the shoreline. However, it’s the southern end of the bayou that Touche said is where the real action happens.

“The marshy section of the bayou is loaded with baitfish because of how close it is to the lake,” Touchet said.

It’s the proximity to the lake that allows the bayou to hold a variety of bait that isn’t commonly associated with bass fishing, including pogies and shrimp.

“It’s hard to ignore the balls of baitfish scattering on the surface as bass erupt on them out here,” said Touchet, who scans the surface as he cruises south. When he spots an area of disruption, he shuts off the engine and drops his trolling motor. From there, it’s all about approaching the school in stealth mode.

“Think speckled trout. It’s just like fishing for specks under birds,” Touchet said. “You don’t want to disrupt the feeding.”

He recommends keeping the boat around 20 yards from the nearest outer edge of the surface commotion and making a long cast as close as possible to the feeding frenzy. 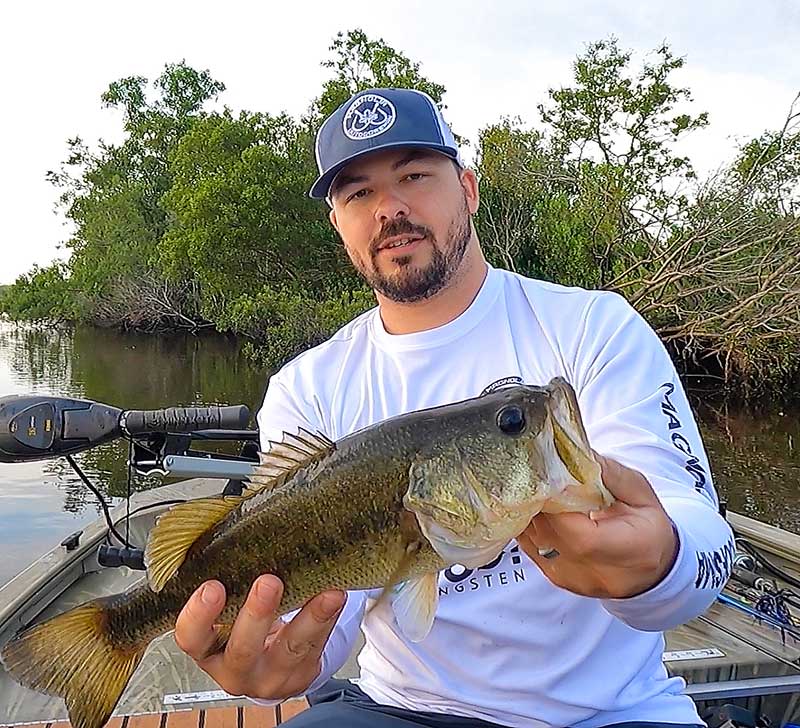 When choosing a lure, Touchet said he has the most success with ones that mimic the baitfish in color and draw lots of attention due to the displacement of water. After trying out numerous lures over the years, he’s decided on one that has both qualities.

“The 21/2-inch Rebel Pop-R in the chrome color is my favorite,” he said. “In fact, if I only had one lure to choose to fish with for the rest of my life, it would be that bait.”

Touche prefers to work the bait in a sporadic fashion instead of the popular walk-the-dog manner.

With the summer heat raising water temperatures, getting an early start is of the utmost importance. Touchet likes getting out on the water at first light because it allows him to find the scattering baitfish easier.

“The earlier you get out, the calmer the wind — for the most part,” Touchet said. “It’s so much easier to spot those bass busting on shad when it’s dead calm.”

Another reason is that the window of time to fish is shortened by the heat in July. Touchet said you are looking at 3 to 4 hours to fish before the topwater bite shuts down. After that happens, he said he turns his attention to the grassline.

“Bayou Bonfouca has a distinct grassline that is visible, even if though it’s submerged,” he said.

Touchet positions his boat about 10 feet off of the grass line and uses his trolling motor to cruise along the submerged wall of grass. He casts in front of him and retrieves his lure along the grass to maximize its time in the strike zone. He recommends using soft-plastic lures that can be rigged weedless to avoid hanging up.

“I have the most success casting into the grass and reeling it in until it reaches the edge. Then, I’ll let it drop, and the strike will come when the lure sinks,” Touchet said.

For fishing the grass line, he recommends Saltwater Assassin’s curlytail in the chicken on a chain color on a No. 2/0 worm hook.

While the action is heavy in July on Bayou Bonfouca, Touchet warns that these are typical marsh bass, with the average size being under 2 pounds and an occasional 4- to 5-pounder mixed in.