Quentin Cappo sure wants to get in the swim of things during the dog days of summer.

A Bassmaster Elite Series angler from Prairieville, Cappo depends on one artificial lure when he’s fishing for bass in July.

“If I’m fishing in Louisiana primarily because we have shallow water. … If I had one bait to put in my hand, everybody says a jig,” Cappo said. “I’m going to go a step further and say swim jig. As far as versatility, I’m going to say a swim jig is the bait I want to have.

“It seems to get the bigger bites. The fish that hit the jig are going to be keepers.”

A swim jig is effective anywhere, as he proved last year during the Bassmaster Elite stop in August at Cayuga Lake near Union Springs, N.Y. He caught all of the bass he weighed on a swim jig. 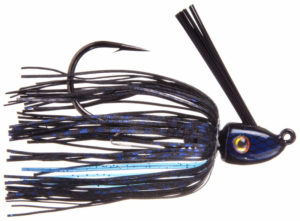 Cappo, 35, prefers to use a ½-ounce Strike King Hack Attack Heavy Cover swim jig the majority of the time. It’s all about versatility, he said.

“I can cover any column of water,” he said. “If I want it up in the column, I put on a Strike King Rage Craw, something that creates water displacement, drag. If I want it a little deeper, I put like a Rage Swimmer, a swimbait tail that creates less drag and allows the bait to dive deeper.”

The same thing goes if he’s targeting bass in vegetation, Cappo pointed out. The Strike King Rage Swimmer allows the jig to slide through the vegetation because there is little drag.

The jig’s bite is what he really likes, the black-nickle. 5/0 Gamakatsu Siwash hook.

“It’s got a very heavy wire hook; I’m not worried about bending it on a heavy fish,” he said. “It’s got a heavy weed guard on it to keep it weedless with that big of a hook,” said Cappo, whose favorite colors for the jig’s redesigned skirt are white and black/blue. Those colors, he said, cover the whole spectrum of what the fish might be eating, whether it’s shad or bluegill.

Cappo has caught bass on the swim jig everywhere from Louisiana to New York’s Cayuga Lake. He has caught “a handful” of 5-pounders on it.

“It seems to get the bigger bites. The fish that hit the jig are going to be keepers,” he said.

He ties the jig to 17-pound Strike King Tour Grade fluorocarbon line on a Lew’s High Speed Hypermag reel (8:1 ratio). Why does he choose flourocarbon a majority of the time over braided line?

“You know, a lot of times I feel like I get more bites on fluorocarbon,” said Cappo, who fishes the jig on a 7-foot-1 MH Fitzgerald rod. “It depends on what cover I’m fishing. But if I’ve got one rod in my hand, I want fluorocarbon to cover all the water that I’m around.”