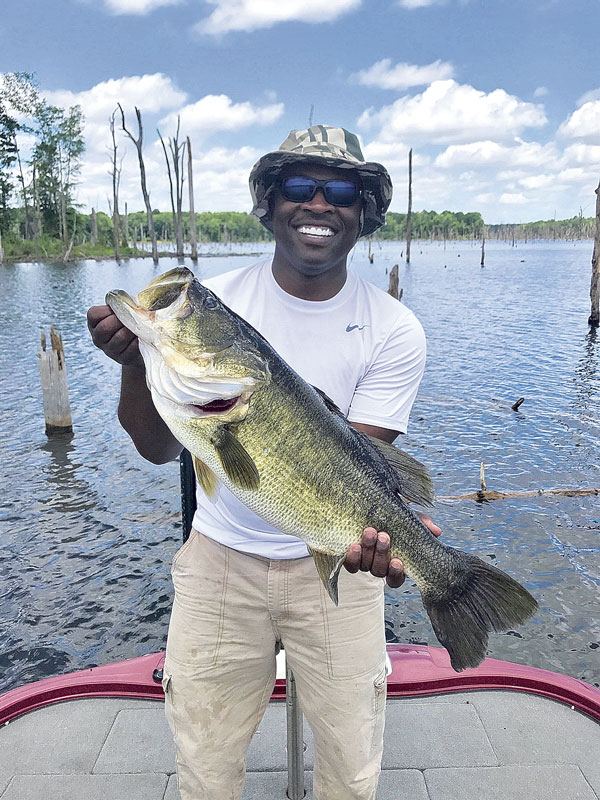 Charles Thompson III of Bossier City is building a bass fishing powerhouse at LSU-Shreveport. That was the word earlier this year from a respected veteran bass angler in the Shreveport area.

The championship building claim is hard to argue after 2021-22, Thompson’s second full year as coach of the LSU-S Fishing Team. The Pilots finished the season ranked 20th nationally by the Association of Collegiate Anglers after starting the season unranked. They are the only Louisiana college ranked in the Top 25.

During the early stages of college bass fishing, the LSU-S club team was ranked No.1 after the 2014-15 season by Bassrankings.com. The Pilots boasted two two-man teams then. When Thompson took over, four student anglers were participating. For the upcoming season, he said, 18 will be on the LSU-S Fishing Team.

Those Pilots include Levi Thibodeaux of Chackbay, a Thibodaux High School graduate who Thompson signed Oct. 22 in Decatur, Alabama, after Thibodaux won the inaugural Bassmaster High School Combine on Wheeler Lake, and Marlee Churchman, the first female to sign with the Pilots after a sterling career at Captain Shreve High School.

“I’m a daddy. I knew I was going to recruit a young lady. Marlee was the one,” Thompson said, noting he and his wife, Lashonda, have a son, Deyon, and three daughters, Jessica, Rhyan and Lalia.

A place in history

Thompson holds his own place in history as the only African-American coaching a college bass fishing team in the U.S.

A year ago, Thompson also signed Khristian Rousseve from Edgard, a West St. John standout who became the second black student/athlete in the country to earn a bass fishing scholarship.

Thibodeaux, Churchman and Rousseve fit the mold for what their coach wants on the team at LSU-S. His emphasis is on character, on passion for the sport and on recruiting high school bass anglers mostly from Louisiana.

Tying knots? Picking artificial lures? How to use various techniques? Knowing the water?

“By the time they get to me they need to know all that. The main thing is the mindset when the bite isn’t there. I don’t necessarily teach them a technique. I teach more so when to apply it,” he said, noting it’s like a quarterback reading a defense, or pitcher reading a batter.

Thompson was helping high school seniors go to the next level a few years before he took the coaching job. The retired U.S. Air Force Senior Master Sargeant and his wife awarded scholarships after they moved back to Bossier City, called the VLG (The Village) Scholarship for local high school seniors with at least a 2.5 GPA with aspirations/acceptance to college or trade school. He was inspired to do that by God, he said.

Apparently, He had an even broader plan.

One day, Thompson said, he was talking to one of the guys at Bass Pro who was aware the couple helped local seniors with scholarships.

He thought about it some more. Intrigued, he contacted LSU-S. Still, he was unsure if he wanted to take it on when he interviewed.

His military background surfaced when he sat down to talk about the coaching job with LSU-S.

“I interviewed with the school. I was really tough in the interview. I said, ‘If I take this job, I’m not going to baby them. I’m going to teach them responsibility, teach them to be good citizens …,’ ” Thompson said. “I wanted to make sure the school was behind me in decisions I would have to make.

“The truth of the matter is, I’m a big pushover, a softie. They (LSU-S fishing team members) see that,” he said, “but the kids know I have a bold line in the sand and not to cross it. We get things worked out, you know?”

The former radiology physician assistant travels the country as a clinical and device training specialist for Bracco Diagnostics Inc. He’s away Monday through Wednesday or Thursday. Thompson spends time with the fishing team when he returns home.

The once-avid, competitive and highly successful golfer was working at a hospital in Norman, Oklahoma, approximately 15 years ago when a buddy took him bass fishing. His golf days were numbered because of reccurring back problems.

“I just got hooked. No pun intended. I just started fishing more than playing golf,” he said.

He fished the old FLW tour’s Cowboy Division as a Co-Angler. He was 11th overall the first year and 16th his second and final full season.

“It was pretty nice. I enjoyed it. I just didn’t have the time (to prefish) to go to the boater side,” he said.

Those weren’t the end of his tournaments. He fishes when he can in the Bossier City-based Barksdale Hawgherders Bass Club, mostly active and retired military personnel. He finished fourth in the bass club’s AOY race in 2021. Mostly, he said, he’s at his best when he has time to prefish.

“It’s a fun little trail, mostly all ex-military,” he said.

His personal best is a 10.7-pounder he got his hands on five years ago at Lake Naconiche north of Nacogdoches, Texas. It bit on a 3.5.-inch Kietech Swing Impact Swimbait.

“I’m a junk fisherman,” he said. “I throw everything in the tacklebox. I don’t really have a favorite. I can flip. I love to throw crankbaits, buzz baits and soft plastics.”

Admittedly, he doesn’t have time for a “favorite lake.”

“Sometimes if I need to go to Benton (on business), I may go to Cross Lake, Caddo or Black Bayou,” he said. “Those are kind of my favorites out of convenience.”

That the LSU-S Fishing Team is on the rise is a blessing, one that’s been earned.

“I think it’s awesome. I love it. But it’s all God’s work. I think he guides me” to develop young bass anglers, he said.

“I want to give kids a place in school, attract young men and women to school in Louisiana. That’s great. I want to help them mature and be great,” he said.

Intrasquad competition determines the top five or six two-man teams, he said, and those teams fish the entire schedule (if they keep up on his point system) with a stipend for pickup truck and boat fuel, tournament fees and lodging.

“We keep a running points system. I try to put my top anglers on the water all the time,” he said.