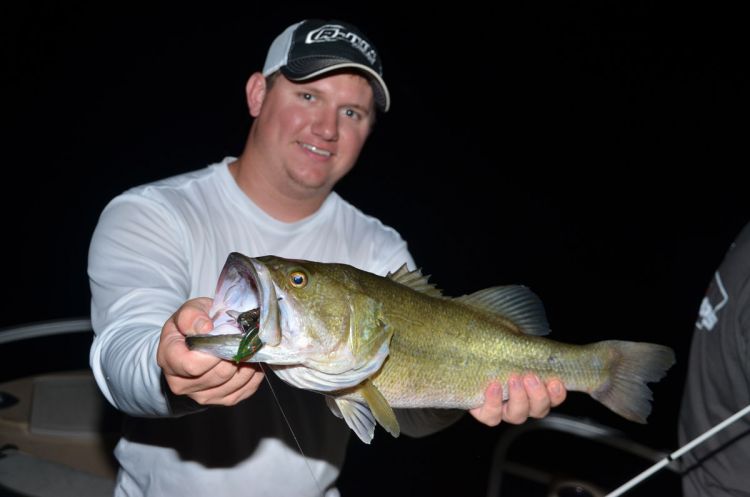 Avoid the heat and traffic and bust bigger bass in the process.

Why fish at night?

It’s easy to predict one answer—It’s not so blamed hot!

But Zac Dubois has more.

“During the summer, I don’t fish in the middle of the day. Only early in the morning or late in the evening, but mainly at night.

“I understand that bass can be nocturnal. They sleep in the day and feed at night. I’ve seen fish that I couldn’t get to bite in the day. Then I go back at night and they tear it up!

“You improve your chances to catch big fish at night too. This lake gets a lot of recreational boating and fishing pressure. I believe bass are smart and I believe that they adjust to the activity by feeding at night.”

But night fishing isn’t just doing the same things you do in the daytime, except after dark, he explained.

“In the summer, they don’t want to eat a lot of little shad. They want one big bite — a big meal rather than a bunch of small meals. They can attack one big thing, swallow it, and then lay up.

“I use bigger weights; they hit the bottom harder. I never use ¾-ounce weights in the spring.

“If you use a spinner, use one with a single large Colorado blade to produce more vibration. At night, bass feed by using vibration and noise rather than by sight, although I know fish can see profiles in the dark.”

Going hand-in-hand with his tendency to use heavier lures at night, he uses heavier lines, simply because line is less visible at night. Still, with the exception of jigs, where he uses straight 65-pound test braided line, Dubois always spools with 17-pound test fluorocarbon.

“Another good thing about fishing at night,” said Zac, “is that it’s calmer. If the wind is blowing over 8 miles per hour, it’s hard to fish the main lake. In the heat of the summer, the best fishing is in the main lake rather than in the shallower creek arms.”

Darren paid attention to his split screen sonar-GPS during the run. “As in the day, it’s important to follow marked boat lanes,” narrated his son.

“It’s best to plan ahead and lay out a track on a GPS during the day. Wherever the bass are in the day, they will be at night, only biting better. Or if you have a good spotlight, you can follow the reflectors on the boat lane markers.”

“Some electronic map cards will have the lanes marked too,” added Darren.

“But they are not always accurate,” qualified Zac.

After hitting the main lake boat lane, Darren turned the barge north until he was “offshore” of the lights of Cypress Bend Marina. He slowed the big pontoon craft to a crawl and zig-zagged toward the marina over the edge of a flat that was 8 feet deep, dropping off rapidly to 40-foot depths.

He maneuvered the barge with his trolling motor, watching the depth sounder screen closely.

To me, the structure on the screen could best be described as a hump. “People around here would call it a ridge or mound,” grinned Darren at my deficit in Toledo lingo. This is known as the Tennessee Bay area.”

“Their tactics were to cast to the top of the ridge and retrieve the lures down the drop-off. Zac started with a black and blue Strike King Denny Brauer Structure Jig and a black and bleu Poodoo Craw that he worked with a jig-and-glide motion.

Darren opted to slow-crawl a Carolina-rigged black and red Poodoo on the bottom.

“One thing about night fishing,” he murmured, “is that you have to concentrate. It’s all done by feel. In the daytime, you can watch your line. If you lose your concentration at night, you can hang it up.”

Darren struck first. “There’s one” he grunted on a modest, but pretty two-pounder. After he caught another one, Zac decided he had enough of the Strike King.

He whipped out June bug red Custom Big Worm. “It’s my confidence bait,” he exclaimed. “I get the most bites on it, although I get more big fish on a jig.”

After a few more fish, they tired of the spot and moved further north, passing between Twin Island and a point of the main shoreline.

Fishing here was on a sunken brush pile the pair had located by accident earlier while running with their depth sounder on. The brush pile was in water 28 feet deep. The pair threw into 13 feet of water and retrieved their lures downhill.

Zac went back to his black and blue jig and black and bleu Poodoo Craw. Darren stuck with his Carolina rig. Both paid off as each jacked fish out of the brush.

They patiently and persistently stayed on the brush pile, casting into the inky night, their baits plunking out of sight in the darkness. Apparently though, patience had limits.

They decided on a totally different tactic. Back to Negreet Creek arm they went to fish the lighted docks. It was a totally different game, with the well-lit piers and boat houses providing visible targets. The lights weren’t submerged Green Monster-type lights, but rather overhead lights.

Occasionally, feeding bass even showed themselves, offering a version of sight-fishing.

Zac successfully fed them his black and red Texas-rigged Big Custom Worm, producing his biggest fish of the night.

For his part, after he lost all his red and black Poodoo Craws, Darren seemed to lose concentration. At 2 a.m., he yawned widely. “How late do you want to fish,” he asked?