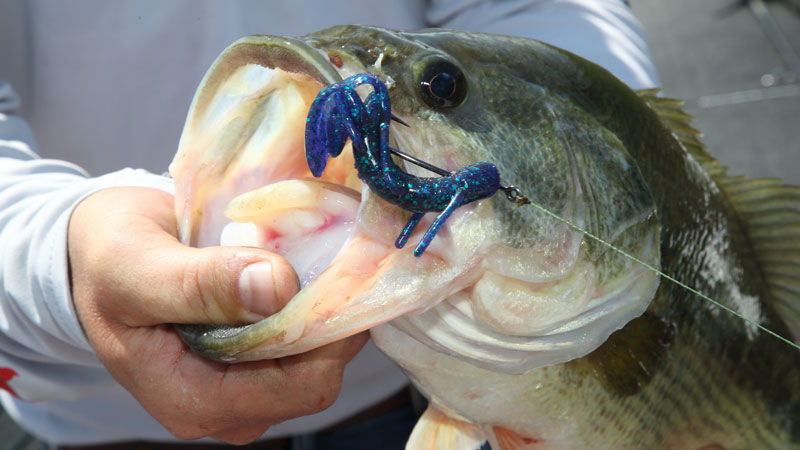 Canals around Lake Penchant are full of hungry bass when the spawning season turns on in March.

Like most guys, Mike McCorkel of New Orleans, works hard to make a living, and he puts in a lot of hours to do so. When an 11-day offshore hitch is finished, he’s ready to do two things.

First, it’s seeing his wife and children. Second, it’s jumping into his bass boat and getting on the water somewhere.

McCorkel, originally from Houma, is quite familiar with the waters below Gibson. He regularly fishes out of Bob’s Bayou Black Marina, and one of the regions he likes to fish during the latter part of the bass spawn in March is around and near Lake Penchant.

McCorkel and others who fish the Penchant region pretty much promise that you’ll catch something, particularly when it comes to bass during the early spring when they’re being amorous. Anglers will also catch hungry redfish on the prowl as water temperatures rise as winter disappears. 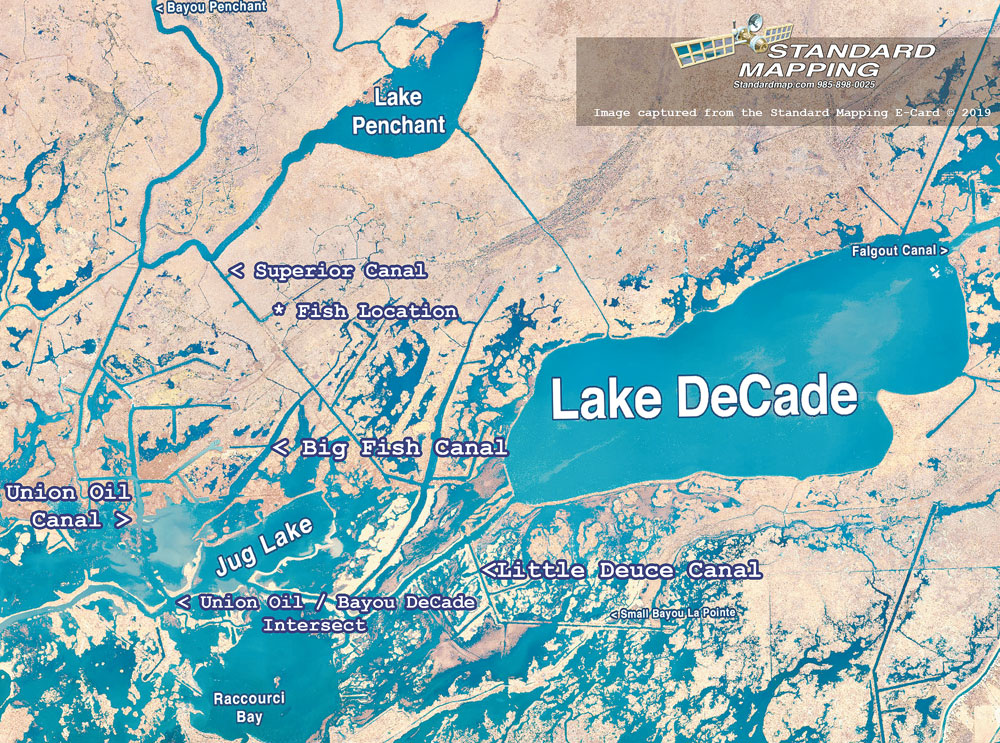 McCorkel fished the Penchant area in late March last year, along with Gerald Foulcard, his close friend from Patterson, and another fishermen. True to McCorkel’s guarantee, they put a smackdown on aggressive largemouth bass in the dead-end canals around the lake.

For non-locals, getting to Lake Penchant is going to be either a long drive and short boat ride out of Dularge or just the opposite — a shorter drive and long boat ride from Gibson. Regardless of the logistics, the results will be the same once you get there.

Lower Terrebonne Parish is teeming with canals, many of which are the primary spawning locations for largemouth bass. They include the Superior Canal near Lake Penchant, the Union Oil Canal near the Bayou Decade intersection, the Lil Deuce canals near Lake Decade, and Big Fish Canal near Bayou La Loutra near Jug Lake.

Discussing the bass connection these canals have with Lake Penchant, Jug Lake and Lade Decade, McCorkel said, “This is a pretty big spawning area. You have fish coming off Lake Penchant and these other lakes moving into these canals to do their thing: spawn. The canals are 4 to 5 feet deep, where the fish we target are just off the bank typically in 11/2 to 2 feet of water. The depth make them ideal spawn and post-spawn locations.”

Starting out in the Superior Canal, it became quite evident McCorkel knew what he was talking about. In the first 300 to 500 yards,  by fishing isolated cover off the bank, five fish that would have been tournament keepers came to the boat. One of the things McCorkel noticed was the bites were not directly off the bank itself, but instead 10 feet and further away.

“The Superior Canal is an oil-field canal off of Lake Penchant,” he said. “It’s a good breeding area for fish, and it’s the first canal off the main lake for those fish to move into. But you can’t be scared to fish out in the middle of any of these canals. They don’t all spawn close to the bank. They spawn wherever they want to spawn, really. They’ll make their nest in 3, 4 or 5 feet deep water.”

McCorkel purposely fished the open water between the bank itself and the subaquatic cover towards the middle of the canal. He got several big strikes, catching bass just before reaching the cover and in the cover itself.

“Cover off the bank always seems (to be) a better target in the Penchant area,” McCorkel said. “You may have to make four or five casts to it, but there’s going to be fish in it.”

The canals also offer structure below the surface, where production platforms are present. Shallow-water platforms have plenty of pylons under suspended walkways and the platforms themselves.

McCorkel flips baits with precise accuracy. The shallow-water platforms provide shade and cover over bass beds and the pylons that support the structures make excellent targets for baits.

On more than one occasion, McCorkel hooked and landed chunky 3-pound marsh bass while retrieving a spinnerbait from under the platforms, between the legs.

On his trip to the Penchant area last spring, McCorkel’s bait choices were plastic frogs, weightless plastics, spinnerbaits and Chatterbaits. Towards noon, when the sun was high and the bite possibly slowing down, he would switch to flipping jigs on cuts where bayous crossed canals.

Foulcard prefers finesse baits in the canals. He fished a weightless Senko and a ¼-ounce Kajun Boss spinnerbait in  G-Man color (black/yellow skirt). He also prefers to fish small crankbaits like Bandits in baby bass or Tennessee shad colors.

“I go smaller simply to match the hatch at this time of year,” Foulcard said. “A lot of small fry are swimming around, which makes smaller sometimes more attractive to fish because that’s what they see. But, I’ll also fish a little deeper with a Zoom Speed Craw or use small creature baits on secondary dropoffs or along the deeper side of grass lines like we fished in the Penchant area canals. I do that because most of the post-spawn bass tend to go a little deeper.”

McCorkel said he also liked to match the size and color of the baitfish present.

“When I use a spinnerbait or Chatterbait, I’ll use primarily perch colors, because we’re essentially targeting spawning and post-spawn bass in the latter part of March,” he said. “So I’m going to imitate a perch or some sort of panfish the bass will react to. Colors like green pumpkin and watermelon seed with a tint of chartreuse are good colors this time of year. A Chatterbait is like a spinnerbait on steroids. It has so much vibration and so much action, bass can’t stand it.”

According to both McCorkel and Foulcard, how you fish this region in late March is important, too.

“It’s important at this time of year not to fish too fast,” McCorkel said. “A lot of people come around here and put their trolling motor on high and cut across the canal and make four or five casts and leave. I think this particular time of year, you want to slow it down, make repeated casts and take your time. Don’t go blazing though the area at 100 miles per hour. Slow it down, take your time and be accurate with your casts.”

McCorkel said 90 percent of the time, he fishes with either 50-pound Power Pro braid or 15-pound Trilene fluorocarbon. He feels like fluorocarbon has a learning curve associated with it, but once, mastered the line’s advantage is strength combined with sensitivity.

Essentially, McCorkel said in heavy vegetation, his go-to line is braid. In other situations, like casting in open or real clear water, he uses fluorocarbon.

“You have to be versatile with lures and presentation to entice a tired and worn out, post spawn bass to eat,” Foulcard said. “So unless you’re getting bit, my advice is to scale down and slow down your presentation.”

Besides a good number of bass, McCorkel got hammered by a decent redfish in one of location canals he fished. The hungry red gobbled up and swallowed his Chatterbait-style bait made by Wicked Lures he was using.

Besides bass, it’s not uncommon to catch redfish in the canals associated with the brackish-water marshes below Gibson and Dularge. In fact, most anglers familiar with the region who fish it regularly go with the attitude they’re going to catch something. And that’s not just hoping, it’s a promise.