Bass fishing in Lake Cataouatche is a mystery to many anglers. Gabe Taylor of Luling, knows it like few others. And he said knowing the area and catching bass there are two different things.

“I can give (other anglers) 10 places to go, but that doesn’t mean they’re going to catch fish,” said Taylor.

For anglers wanting to pit their tackle and wits against Cataouatche’s bass, Taylor said it’s truly a game of skill. While locating the fish is always part of the battle, anglers won’t catch them with geography alone. Enticing them to bite is the other half of the equation, and Taylor shares one of his favorite ways to do it.

Taylor said shad are currently abundant all the way from Pier 90 to Lake Cataouatche, especially where Bayou Verret and the Waggaman Canal meet. And further down Waggaman Canal in a refuge northeast of the lake, anglers typically catch plenty of quality bass.

While a river diversion allows dirty water to run though the marsh northwest of the lake, the dirty water will not infiltrate the Cypress Canal. That makes this canal home to some of the cleanest water in the area, said Taylor, and that makes it a great place to hunt for bass.

Once anglers locate a promising bank and detect some action, he said a Zoom Fluke is all they need, thanks to the diversity of the lure. 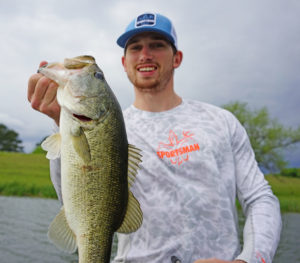 On some days, the bite is subtle and difficult to detect, which can result in numerous missed fish. So Taylor said it’s important to stick with it. This area holds some big bass, so any bite could produce a trophy.

And when an angler does feel a bite, Taylor said they need to remember this is bass fishing, not speckled trout fishing. They need to set the hook like they mean it.