Greg Hackney was chomping at the bit the past few weeks to get back into action on the Major League Fishing Bass Pro Tour, pumped to throw his favorite artificial lure in July.

“Honestly, a plastic worm is hard to beat in July,” Hackney said, particularly his favorite, a 6- or 7-inch Strike King Rage Tail Cut-R.

“I think that worm’s really special. I catch a lot of fish on it,” he said. “Once the weather warms up, I never go without one tied on. I guess it’s a little fatter worm, and it has a Rage Tail on it. The body’s fat, like a Senko. I guess the 6-inch one is the best bite-getter. I’ll use the 7-inch if I’m around big fish.”

“Just experiment with retrieves. I think that’s what makes the worm so good.” 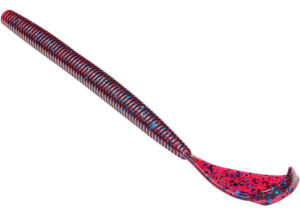 Last August, at the Bass Pro Tour stop on the Mississippi River in Wisconsin, he used the Cut-R to find 22 bass that got him second place with  40 pounds, 7 ounces.

Hackney, a 15-time Bassmaster Classic qualifier, said he has caught many bass on the worm and plans to catch even more He favors two colors: redbug and junebug. He believes both are effective in mid-summer in and around Louisiana.

How does he work it?

“Just experiment with retrieves. I think that’s what makes the worm so good. I catch a lot of fish swimming it by cypress trees,” said Hackney, who pointed out it can be flipped, pitched, Carolina-rigged and Texas-rigged.

For the latter, he uses a 5/16- or 3/16-ounce worm weight, the heavier one for 3- to 6-foot depths and the other for shallower water. The worm’s action is at its best if you peg the weight, because the worm is heavy and its tail pulls so much water, he said.

Hackney said he always uses a 4/0 Owner Offset worm hook, most of the time has it on 14-pound Gamma flourocarbon. Sometimes in the Atchafalaya Basin, he’ll use 15-pound test.

“I really like 14,” he said. “I think I get more bites … not because I think they can see the line. It’s just to get the right action, the right fall.

He fishes the worm on a 7-foot-3 Hack Attack jig rod and a Lew’s Custom Pro baitcast reel.

Bass bite turns on after dark at Caney Lake this month

The best time to catch a big bass on Louisiana’s Caney Lake in the summer is at night. […]

On this episode of DockSide TV, Chas Champagne showcases what his unique spinnerbait, the Matrix Spin, can do for bass. […]

About Don Shoopman 427 Articles
Don Shoopman fishes for freshwater and saltwater species mostly in and around the Atchafalaya Basin and Vermilion Bay. He moved to the Sportsman’s Paradise in 1976, and he and his wife June live in New Iberia. They have two grown sons.