Darold Gleason of Many has been hooked on a certain artificial lure since he caught a couple of huge fish and won a tournament on Toledo Bend a few summers ago.

Gleason, who fishes the FLW Pro Tour and Bassmaster Central Opens and qualified for the 2020 Bassmaster Classic, won that tournament with five fish that weighed 22 pounds, including a 9-pound fish and a 6-pound fish.

“I actually caught the 9-pounder first thing in the morning, so I knew it would be a good day no matter what, you know?” Gleason said.

“I want a hook that won’t flex when I set the hook, especially with a football jig. You’re fishing it to catch big fish.”

What is the lure? 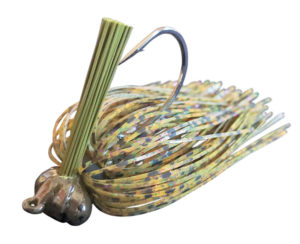 “A football jig,” he said. “Man, I’ve been throwing a football jig about a dozen years. In the summer, when I’m not necessarily trying to catch a lot of fish, I like to throw a football jig. To me, that time of year the fish don’t eat as often.”

Gleason’s football jig of choice is a ¾-ounce V&M Flatline Pacemaker with a V&M J-Bug trailer, in a color V&M named after him, Gleason Candy: green pumpkin with purple flecks.

“It looks like a bluegill. It’s a really good color all over,” he said.

Gleason said the jig has a custom, oversized, 30-degree strong hook for improved hooksets and a larger weed guard to help it move through cover.

“It’s a hook that’s very stout. The main thing for me is I want a hook that won’t flex when I set the hook, especially with a football jig. You’re fishing it to catch big fish,” he said.

Gleason doesn’t trim the skirt, which he said is designed perfectly, or the weed guard. If the bass are finicky, however, he might spread the weed guard apart like goal post to get a better hook penetration.

He fishes the on 15-pound test Hi-Seas fluorocarbon much of the time. Occasionally, he’ll move up to 20-pound if the cover he’s fishing dictates it. He likes to spool the fluoro on a fast-retrieve reel (7:3 or 8:1 ratio) with a wide spool and a lot of line capacity because he makes long casts and fishes deep water. His rod will be a 7-foot-4 Falcon Expert Series Amistad XH.

Bass pro Greg Hackney of Gonzales likes to go with smaller artificial lures in September. He talks about his three co-favorites. […]

Buzzbait aficionados and bass have been going ape over the Gorilla Buzz since it was introduced four years ago by Prototype Lures. […]