September’s the right time for Despino to fish a Wild Thang at Toledo Bend, Rayburn

For the past seven or so years, bass pro Randy Despino of Colfax has relied on a long, plastic worm to catch bass in the stifling heat of September, especially when he’s fishing at Toledo Bend or Lake Sam Rayburn.

“I’m going to be throwing a big worm … if I had to have one” artificial lure in his hand, he said.

And it isn’t just any long plastic worm that he’ll tie on.

“I would throw a V&M Wild Thang,” said Despino, an FLW Pro Tour veteran. “That Wild Thang, 8½ inches, is an awesome worm. I’ve won a lot, lot of money with that bait, won a lot of tournaments. 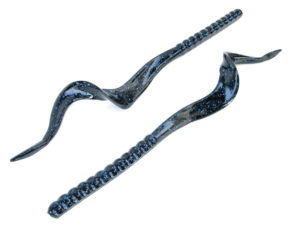 “I’m going to say we fish it a lot around brush piles and isolated stumps. If you can find an underwater stump, an underwater brush pile, that’s what to concentrate on, some type of structure.

“Probably in September, fish are heading into creeks, so I’ll be fishing creed bends, deep creeks with sharp turns, the back side, the deep ledge of the creek,” he said. “I would concentrate on 8- to 12-foot depths. Shad start moving up into creeks that time of year, and fish take to them.”

What makes it such a good bait

Despino started fishing a Wild Thang around 2013, he said.

“We were the first ones throwing it; I guess we’ve been throwing it seven years, I guess since they started making it,” he said.

The Wild Thang has everything he wants in a long, plastic worm. What’s more, it’s very durable.

“It’s got a good, big body on it, and doesn’t tear up as bad. The worm actually looks bigger than it is. It’s 8½ inches. The main thing on it is the tail. The tail is real wide. It’s just got a lot of action. This one, when they hit it, they eat it, and they’re ready to go. Set the hook and get on it,” he said.

Despino fishes the Wild Thang Texas-rigged on a 4/0 Gamatkatsu worm hook under a 3/8-ounce Elite Tungsten weight, tying it to 17-pound Seaguar fluorocarbon. His favorite worm rod is a 7-foot Tommy Martin heavy jig and worm rod; he pairs it with a Lew’s Speed Spool reel.

“A lot of times early in the morning, I start with South African black, then go to a blue fleck when the sun gets real high,” he said.

“That South African black is a sleeper,” he added.