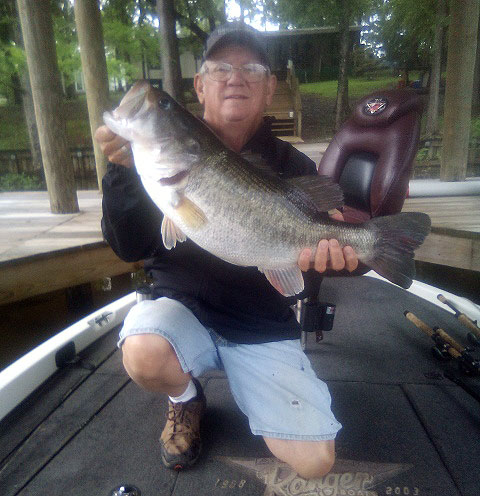 This past Saturday, May 1, a milestone 50 years in the making was reached at Toledo Bend, when 69-year-old Woodrow “Boggie” Colton of Knight landed a 10.36-pound largemouth bass that earned him the 25th spot in this season’s Toledo Bend Lunker Bass program.

Colton was on the water by 6 that morning, bringing with him a long history of “almost 10-pounders” at Toledo Bend. It had become something of a mission in life for Colton to break the 10-pound mark.

He’d never been able to break the 10-pound mark, but as Bob Dylan said, “The times they are a-changin” — at least where Colton’s status on Toledo Bend is concerned.

Find the structure and fish it

Colton was fishing a point in Toro Bay, using an 8-inch Zoom lizard in watermelon candy, Carolina-rigged, on the end of a 7-foot-2 Lew’s rod-and-reel combo spooled with 17-pound line and a 12-pound monofilament leader.

Although plenty of fishermen have told him that he doesn’t need the lighter leader, Colton is adamant that a fisherman should understand how to use drag.

He pulled the lizard around the edges of a long point that stretches out into the deep water. A couple of young cypress trees grow there, but other than the topography of the point itself, there isn’t much structure.

“There ain’t no hydrilla,” Colton said. “You’ve got to fish what structure there is on the bottom now, and there’s not much of it anymore.”

A battle to get the bass to the boat

Yet, as Colton made a slow pass of the point, he saw a log on his depth finder that was 17 feet deep, and by the log, he saw a single fish.

“I was just easing along,” Colton said, “and just about the time my bait was at the log, (the bass) thumped. I said, ‘There it is! Hey!’ and I set the hook.

“The fish pulled and tugged, and it went down, taking drag three or four times,” he said.

The fish moved steadily away from the boat until, suddenly, it reversed course, and headed straight back towards Colton.

He began to worry that the fish would break his line.

“Then, all-of-a-sudden, I heard something,” he said, “and I looked, and the bass was behind the boat out of the water.”

Finally, the bass came to the boat, but it made two or three more pulls towards the bow before it turned on its side. Colton hadn’t had time to grab his dip net, but luckily, the fish was spent.

The fish of a lifetime

“I caught the fish at 8 o’clock that morning.” said Colton, who weighed the bass on a scale he had in his boat. It read 9.66 pounds. He didn’t think that was correct, so he headed to his camp and woke his wife.

His wife convinced him to weigh it again, and when he did, the scale read 10.25 pounds. She told him that if he didn’t get it officially weighed, he would regret it “for the rest of your life.”

Colton had no choice but to head across the lake to the Texas side to have it weighed; his other options were too far away, and he worried about the health of the fish.

He finally had his elusive 10-pound Toledo Bend bass.

“I’ve been fishing Toledo since 1970,” he said. “So it’s been a long time coming; it seems it took a lifetime…. But I’m just getting warmed up.”