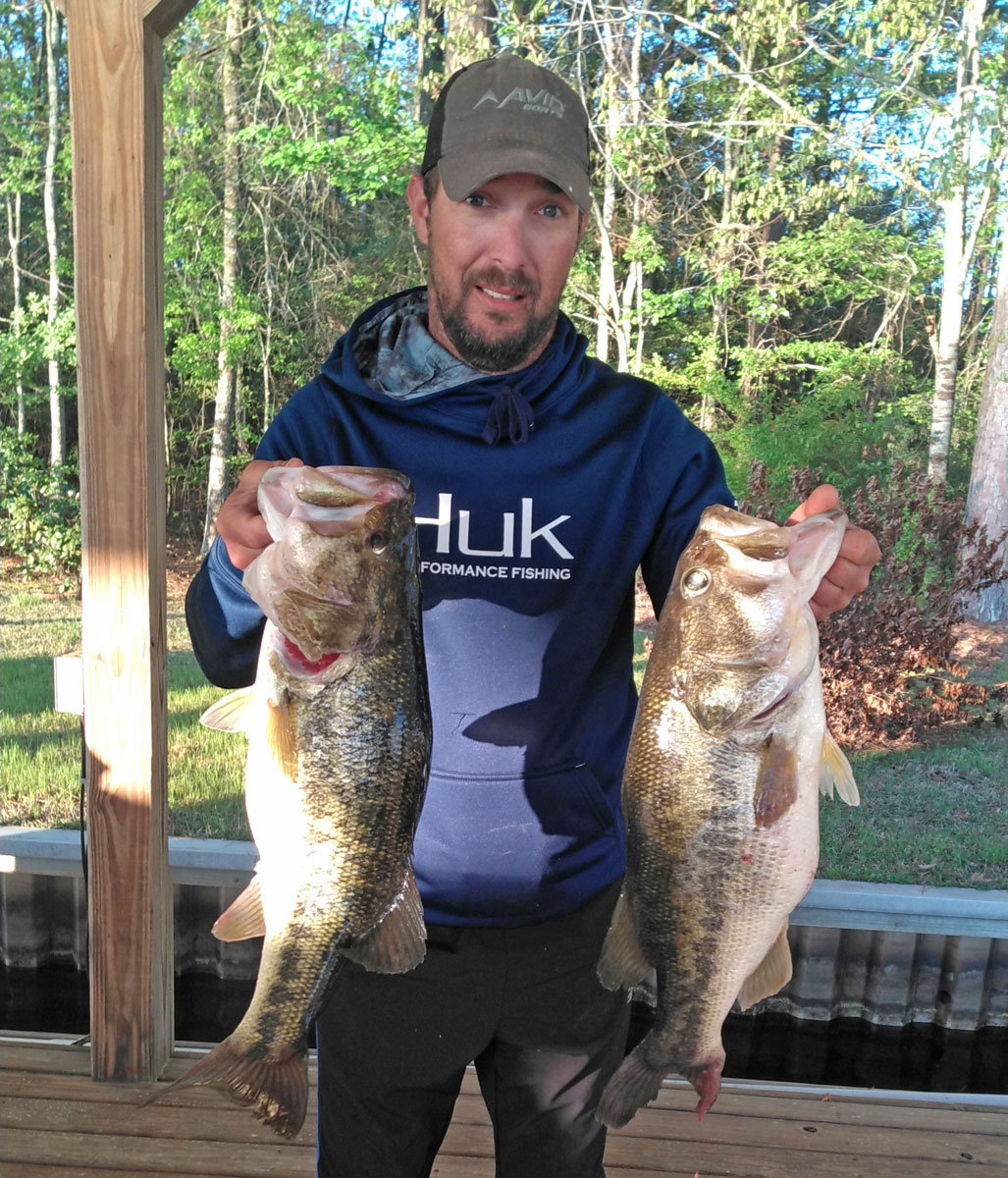 An evening at Caney

Dustin Chelette chose a spot on the main lake that has produced decent fish for him before.

“It’s a place I know they like to spawn,” he said.

There is some spotty hydrilla and a little needle grass, but the topography is the draw for the fish. It’s a slow, flat drop-off from a secondary point.

Chelette was catching fish in 2 to 3 feet of water, but they were small. He guessed that the larger bass were out a little deeper, so he backed off and changed lures. He tied on a black and blue, B’n’M jig, and started casting further down the slope, fishing at depths between 4 and 6 feet.

“Any ordinary point on Caney is fished the same way, especially towards the north end of the lake where it’s much shallower,” he said. “You fish the drop-offs.”

Know when to adapt

After changing depth and lures, Chelette hooked the first of the big bass. Until he had her in the boat, he didn’t think she was anything like a double-digit fish. She didn’t fight much, and he got her to the boat without trouble. Chelette didn’t have a net, so he reached down and lifted her into the boat. To his surprise, the fish weighed 10.17 pounds; she was 26.5 inches long.

“I threw her in the live-well and didn’t think much about it,” Chelette said. “I figured I’d caught my best of the day.”

Know when to persist

Having established where the big fish were located, he decided to stay put.

“I stood up, and cast into the same spot where I caught the first one,” Chelette said. “I [finessed] the jig one time, and she hit.”

“She took enough line out that I had to pick the poles up, and chase her with the trolling motor for a second,” Chelette said. She fought hard, but eventually he was able to get her turned around; he started taking line back. As before, when the fish was spent, he eased her next to the boat and picked her up by hand. This fish weighed 10.93 pounds; she was 24 inches long.

“I caught two bass over 10 pounds in back-to-back casts,” Chelette said. “So I just quit and went home while I was ahead.”

After he found a photographer to record this special moment in his life as a fisherman, Chelette released the fish back into Caney Lake.

More to the story

Chelette said he caught the first fish as she was coming off the bed; she was a post-spawn bass, but the second fish — caught in the same spot as the first — was full of eggs.

The timing was special, too. Chelette caught the fish five days before his 41st birthday. He calls them his early birthday presents.

It was only later that Chelette realized how special the experience truly was. “[At the time], I didn’t even think about how rare it is,” he said. “I’ve caught big fish before. I’ve caught several big fish, but I’ve never caught multiple, double-digit fish on the same day. And on two, back-to-back casts…Only on Caney.”