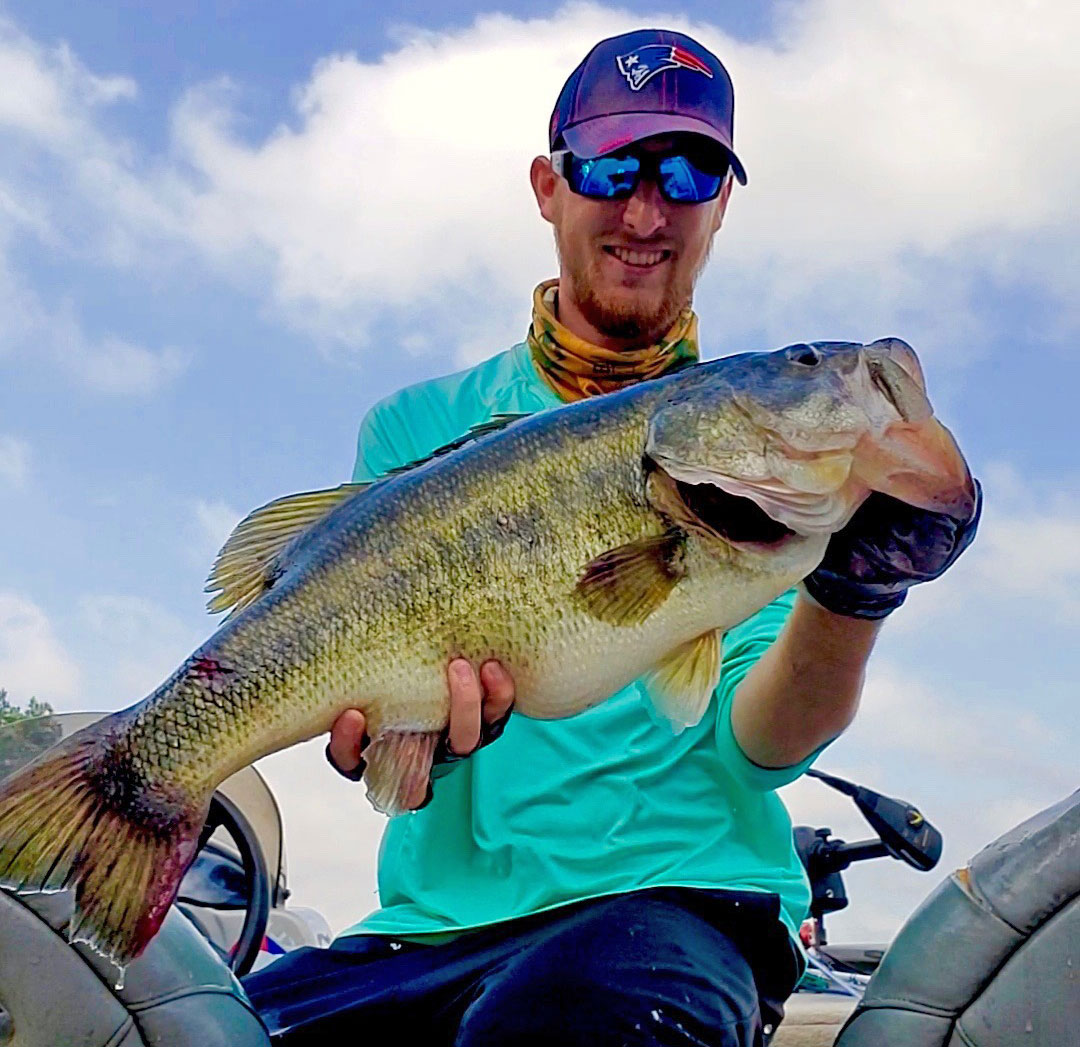 Ever been planning to go fishing, sleep a little bit late and pose the question to yourself, “should I stay or should I go”? Well, if you ask Dalton Thompson, it’s a good idea to say yes, you should go.

“Tuesday morning, March 24, I was planning to get to Caney Lake at daylight, but I overslept a little bit,” he said. “I rolled over and started to go back to sleep, but decided to get up and go anyway.

Now he’s glad he did. The 23-year-old Picayune, Mississippi, angler drove from Monroe to Caney and caught his dream largemouth, a 12.47 pound lunker. It’s the first time he’s ever seen the Jackson Parish lake.

It was actually easier to get out of bed than to catch the big fish, he said. Here’s his story.

“I was over here this week helping my mom, a traveling nurse, move in a  place in Monroe, so I just pulled my boat along, too,” he said. “I check out some of the lakes in the area and tried Bayou D’Arbonne one day, but it was too high. I drove to Toledo Bend to try some sight fishing, but it was high and too dingy. So I studied up a little bit and saw where some really big bass were being caught at Caney, so I had to give it a try.”

The Pearl River Community College Electrical Technology major had looked at some overhead views and picked out a section of rip rap to try early, but he figured by the time he got there, it would be busy with fishermen. It wasn’t. So he worked his way down it and caught a few decent fish when he spotted a big spawning bed “the size of a kitchen table.” He saw a male on the bed, but no female. He anchored his boat and watched the bed. Sure enough in about five minutes, a big female swam into the bed.

“I got pretty excited, but I didn’t think the fish was over seven or eight pounds. I started throwing everything I had at her. No interest,” he said. “She swam on and off the bed several times. I started fishing for her at 8 a.m. and didn’t catch her until 10 a.m. I didn’t fish solid and gave her some time to settle down. I tried bait after bait, but she kept coming and going. Finally she locked down and stayed on the bed.

“I was about out of things to try and the wind was picking up, so I tied on a small white Rage Claw plastic so I could see it and threw it right on her nose. She nailed it,” he recalls. “I caught her the first time she bit. Then I knew she was bigger than eight pounds. She headed for deep water and I went to the back of the boat. I finally got her up to the boat and she ran under it. I sat at the console and when she came back out, she started to jump right by the boat. Her mouth was open when she hit the top and I just grabbed her. Man, then I thought it was a 15 pounder!”

Getting the fish weighed

He called the marina, but it was closed due the the Coronavirus and he started looking around the lake and found two anglers from Wisconsin who had a good, accurate scale. He weighed her, took some pictures and then released her back in her “bed” room.

“We don’t have any fish like that where I live, that’s for sure,” he said. “It was a perfect area and that grass in the lake is really making a difference from what I can tell. These are some big, healthy fish.”

He was going to fish some more, but he had to tell a few folks and send them a picture. He didn’t have cell service, so he loaded up and headed for home, where he could share his story.  Will he be back?

“Of course,” he said. “I can’t wait. When I graduate, I may even have to come look for a job over here.”