A bass pro and Toledo Bend fishing guide who recently completed his first year on the FLW Pro Circuit at age 21 knows what he will throw the first month of 2021.

Colby Miller’s choice is a V&M Pacemaker Flatline jig. He prefers to tie on a 5/8- or ¾-ounce model to the business end of his line.

“My reason for throwing the football jig in January? Those big suckers are, like, laying around isolated wood and other structure,” he said. “A jig has always been my confidence bait for getting a big bite, you know?” 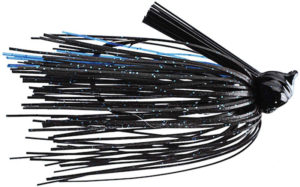 Miller, who hails from Elmer but now lives on Toledo Bend, has plenty of experience with the V&M Pacemaker Flatline Pacemaker jig, having caught plenty of fish on it.

“It’s just what I’ve thrown for several years. I’ve thrown a jig for so long. I have so much confidence with it,” he said.

Fishing Toledo Bend with that football jig is a must in January. How and where does he throw it?

“It just depends,” he said. “Each year is a little bit different.”

“I like to feel something. I like to fish a hard, clay bottom, big stumps or logs or even a big brushpile,” he said.

Miller uses the 5/8-ounce model when the structure, such as wood, is “super thick” in an effort to avoid hang-ups. Sometimes, he’ll downsize to a ½-ounce model if the bass are just pecking at the heavier model and don’t seem to want to eat it. He’ll slow the fall with a larger, soft-plastic trailer.

The heavier jig is for when the bass seem to be active and want to move around a lot.

“I’ll throw a big jig down there, and they’re going to swallow it,” said Miller, whose favorite colors are black/blue and sneaky snake.

Miller fishes the jig on a 7-foot-3 MH G-Loomis rod with a Shimano Curado K reel loaded with 18-pound K9 flourocarbon. He uses 60-pound braid when he’s flipping around thick cover such as bushes or grass in shallower water.